1588 is experiencing lag spikes multiple times per day during raid hours. Usually for 10-20 minutes at a time. The ping on the debug HUD is shown as 1020ms (max), players are unable to do anything and have to endure the lag spike because they don’t want to log off in dangerous locations. This has apparently been going on for numerous weeks. Spanning back to at least the beginning of May, possibly even farther.

How has this not been address by either gportal or funcom?

Reporting the server using the in-game feature yields no results. This is completely ruining the experience for many players. Why even host official servers if they are not properly maintained?

Please fix this issue. It is real annoying I can’t play the game. I just want to build a base and level thralls. Instead I am stuck just sitting here hoping when it ends I won’t be dead.

Why has this not been fixed it has been going on for a month, people have been reporting it.

It looks like we will not be getting a response. They merged your thread into mine, but could care less about responding.

I also play on this server and would love for it to be addressed. Great server, great action, mostly great people

! Lag is making it unplayable.

Your server is being ddosed and there isn’t much funcom devs can do about it.

You do not have any proof that it is only ddos. There is no way it is always being ddosed with how often it is, how long it last, and how it happens at random intervals that do not sync up with players gaining a advantage.

Not saying someone can’t be ddosing it at times but I believe part of the issue could be the server just isn’t up to par. It could be a issue with the games coding and sending packets being delayed because of a queue system

There are users who spammed massive amounts of empty buildings over the server. This could put a strain on the database when certain actions are done lagging the server.

Honestly they should just wipe 1588 at this point with how much it lags every day. I can’t enjoy this game when I step out of my base just to see my ping shoot to 1020.

Its 1020 again can’t move, can we plz get the server looked at and some communication about whats going on plz.

This makes it worse that I just feel ignored like the issue isn’t irrelevant, because no admin, dev, or community leader has responded but have merged my topic meaning they saw it. 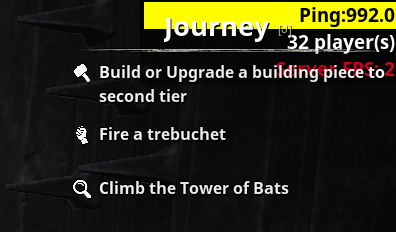 Its back again. Calmed down a sec and shot back up.

People are getting mad and leaving the server because this has not been fixed yet.

server just went down completely. was at 24 players not even full

There are users who spammed massive amounts of empty buildings over the server. This could put a strain on the database when certain actions are done lagging the server.

This is why you guys have issues, we had the same issue on our server, the solution was is taking down the empty buildings and reduce the foundations. Everybody on a server has to come together to do so tho.

Please look into this. I really want to play but these issues are killing the server

I have an ongoing conversation with Hugo about this.
Lots of people throwing DDOS accusations around, I just want the server to be playable again.

Regarding server 1588, we can bring this matter up with G-Portal if you’re able to provide us with the exact timeframe of when the server ping hits such amounts. Be sure to also provide your timezone together with that information.

So if i’m online and experience a server drop or 1020 ping I update him
These are from today: 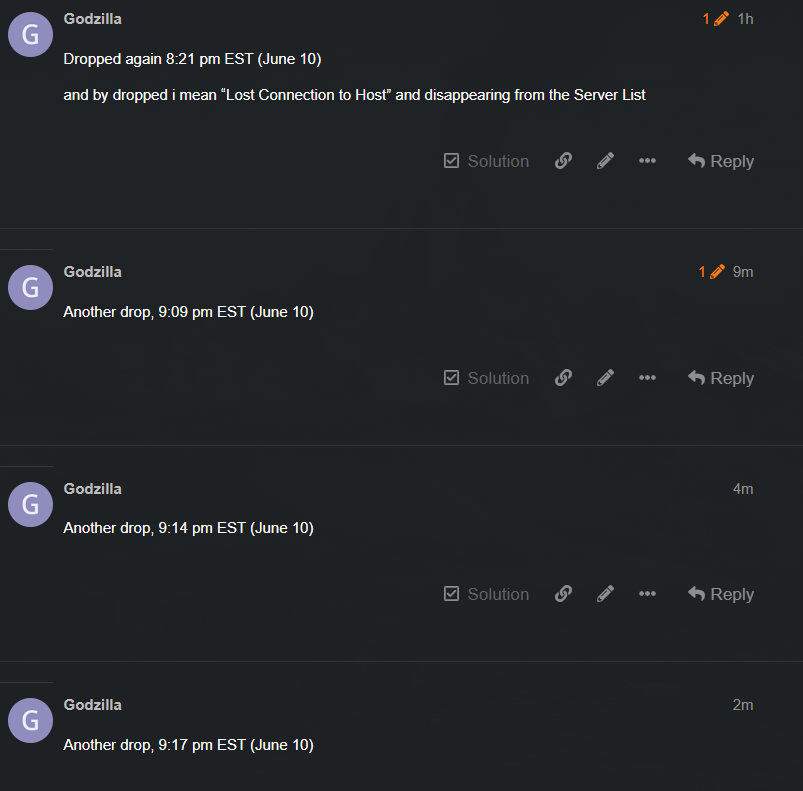 guess who’s back? back again, ping is back, tell a friend

HERE WE ARE BACK AT KRISPY CREAME!