Been playing AoC for a while and I guess this game needs some UI changes and additions, like movable and resizable attack rose. It exists in game, but it is completely unusable because of its size - attack sectors are small and are easy to miss. So it would be a nice UI addition to make it bigger and resizable, it could be placed in the middle of the screen and attack sectors may be placed where player’s shields are. It will make it usable and somewhat reasonable alternative for using 5 (!) keys just for attacking from different angles.
So, after this simple addition we wil recieve

Custom UI is faster. People rely on it more as well.

Well, when it comes to reliability button controls will always overcome mouse controls, but the point was in getting rid of key bindings for basic attacks and ability to perform all of them only with the mouse. As far as I know, none of custom UIs grants that.

Bind the keys on your mouse to whatever you want. Done. 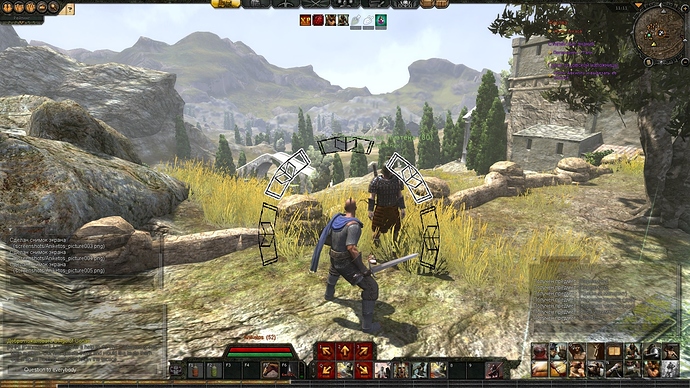 MADSKILLZ.jpg1920×1080 850 KB
Oh, u must be a comedian? Why are you opposed to any tweaks or changes to UI? I dont think you will be the one who will be performing this code or design.

Btw, my mouse got only 3 buttons, and 2 of them are already occupied for some generic stuff like SELECTING TARGETS and MOVING CAMERA.

So there is an example for UI made with paint, to avoid misunderstanding.

People actually use the combat rose?

So you’re pretty much asking for a UI improvement for yourself? For you they won’t make it. Make a custom UI and you will have whatever you want. This is more work for them than its worth it.

Can you help me to find guides about making custom UI? Have not found any, only about installing the existing ones. Actually I would like to make this by myself, but have nothing to start with.

Try StrangeUI first. It has many different UI setups and positions you can change during the installation and maybe one of them will work for you.

Let him ask what he wants, you are kinda doing the same, asking for vanity improvements that only you asked for so far

Many many other people want armor type lock on vanity removed. I’m not the only one.

Just checked this out and made sure that Strange UI does nothing to combat rose except selectable colours, nothing about resizing and reposition.

My point was with the 4-bar versions you might be able to click directly on the arrows in the UI (not the rose) since they are closer to the middle of the screen.

man if you are clicking the attack arrows there is nothing in game that can save you. you are doomed.

my advice if you are new to the game… BIND ALL YOUR ABILITIES, DIRECTIONAL ATTACKS AND COMBOS to your keyboard and to your mouse if it has extra buttons.

Pick a UI to fit all your stuff and use it only to monitor the cooldowns. all the action combat should be executed from the keyboard.

skip clicking, this is not a traditional MMO with auto attack and global cooldown.

This is good advice.
However I know that some people may not be able to fully use their keyboard and hence keybinds due to health issues. I once raided with a woman who had use of one hand only due to a stroke.

Oh, it was very nice to recieve some cool hints from pros about keyboard usage, even if I have literally mentioned this in my first message. I have always been playing on keyboard, and you guys know why? Because it is UNPLAYABLE otherwise, and that’s exactly what I want to change. So, as no one knows any possible decision, it will be very helpful if someone will provide me with guide or any sort of info about creating custom UI (as I have already asked few replies ago), thanks in advance.

Just use strange UI, or find a way to edit it. The reason why this game is almost unplayable without keyboard is simple, it’s a game made for playing with both not just one. Play WoW if you want simplistic combat. Strange UI has this click option but I’m more than certain people don’t give a fudge about it because it’s useless and doesn’t make 1 handed gameplay viable and that’s the best part, this game has action unlike wow.