Card game (CCG) that you prefer (and in-game moments)

I love CDG sine my childhood with Yu-Gi-Oh ! and Pokemon card. There is 2 year, I rediscover card game with Hearthstone but with a technic so simple, I was very happy when Yu-Gi-Oh! Duel Links is launched. If you love like me this kind of game, share it here and share also your best moments during your battle.

Oh man magic for sure. I think the most insane moment was recently. For the hell of it me and 3 others had a All vs All with the 4 of us at once. And one of them build this insane huge monster that just kept growing (we talk millions of power/toughness in the end). At a couple thousand power/toughness it was stolen by a blue/black deck, and made flying lol. Luckily for me she kept sending it at the original owner, who just kept pumping out flyers to block it. Eventually i got so far down in my deck, that i reached a creature that could steal the thing for a round at a time. I murdered the Blue/Black “owner”, original owner got it back and took out the other player on the field. Eventually between the two of us we called it quits, counted cards left in deck, and settled the game depending on most cards left.

Oh side note, the big ■■■ creature also had lifelink, and it grew so insanely big because each time it stole life, the enchantment on it put the same number of +1/+1 counters on it as the life stolen. We had to use our phones to indicate health of players and the freaking counters on that thing.

I’m sure somewhere the rules slipped up, that or a card in there needs to be banned lol, cause that was completely insane.

Chron X - the best there ever was and ever will be.
Auto Assault TCG - Fantastic game (later became Legends of Norrath).
Stargate TCG - Good and fun mechanics.

I’ve found no other TCG that can match these three games. And the later years focus on CCG makes me sad, especially the ones with “make duplicates into a resource and craft other cards” machanic and over simplified gameplay.

I’m a BIG fan of the Pokémon Trading Card Game, particularly when playing in-person against others. I haven’t met people interested in playing with me for a few years now, but I still collect the cards - love the adorable art, as well. The booster packs all come with codes to unlock cards in the online version, too, so you can play with others over the internet if you so desired! It’s even in mobile form now!

I’ve been collecting for years, so I have some particularly rare cards, though my rarest are all from back when Wizards of the Coast held the reigns of the game in the US. I’ve even got some of the original Shining cards!

I also sometimes collect and play Yu-Gi-Oh, but Yu-Goi-Oh has gotten overwhelming with the sheer number of new mechanics it brings since I hadn’t played seriously in over a decade. I’ve enjoyed Duel Links, which was already linked in the thread! I do wish it had a more physical link like PTCGO does with its card codes, though.

And I love Hearthstone! I’ve been a fan of the Warcraft series since Warcraft 3, and Hearthstone is a delight visually and tonally! Love the humor, and the fact that I can be Medivh and Khadgar, my favorite bird mages!!! Hearthstone is just good fun. It may seem simple, but there’s a nice opportunity for strategy involved.

Since you asked for a story, I have a silly Hearthstone anecdote for you. One of the Tavern Brawls - silly weekly shake-ups to match mechanics - was that you could choose 3 cards and your whole deck would be built of 10 of each of those 3. So I went with a Murloc Tidecaller, Grimscale Oracle, and Murloc Tidehunter. The Tidecaller gets stronger when you summon other murlocs after playing it, the Oracle boosts the strength of other murloc cards in play, and the Tidehunter summons another murloc when played - and they all cost very little mana to play. As you can imagine, this was a ridiculous, devastating zerg combination. It was frankly hilariously broken and I had a blast storming through so very many wins that week! I know there were so many other more brutally broken combinations people could have chosen for that brawl, but I just had so much fun with my ridiculous murloc spree.

I kinda wish Pazaak would really exist outside of Star Wars…I always found it a fun little pasttime. 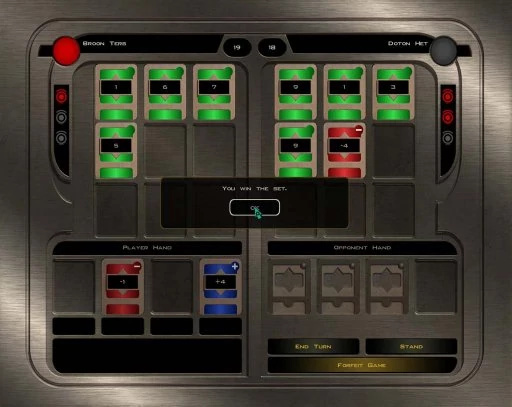 Sorry, sorry, I made a fault in the title

Thank you for your share. I also really like CDG. I can request a game mod on CoiMobie to have advantages in the game. Like the games I used to play like Street Racing 3D APK Mod 4.6.6 on CoiMobile