Riding along the eastern beach on Siptah, enjoying coming back to the game after a break and… 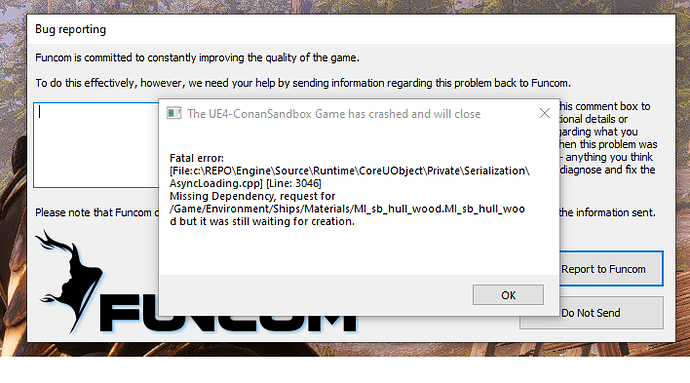 No crashes in the official launch version of Siptah.

Haven’t been able to reproduce.

I have exactly the same issue. I was riding across the region east of the tower, heading south, when the game crashed. This is the third crash, and it always happens in the region around the tower. 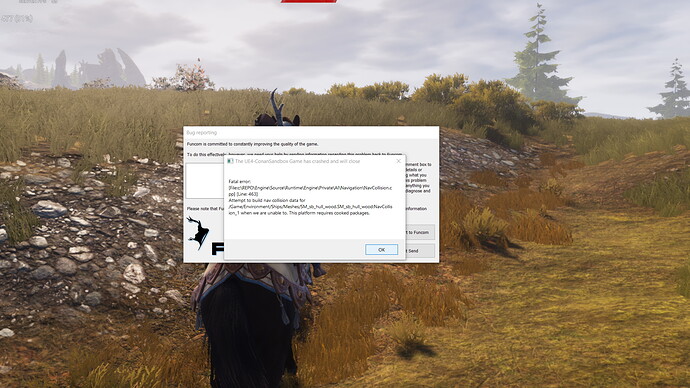 Exact coordinate would be helpful. You can get them by hitting Ctrl + Alt + Shift (right). This shows the coords and you can easily copy and paste them.

I experienced some crashed lately, but was also testing some new mods, so wasn’t sure about the issue.
Had different crashes also while testing and teleporting by admin to the new biomes (from Island of Threa).

Fun fact, after relog i was at ancient location, while my follower was at the chosen location, but under mesh.

So if there are specific locations you can get me, i will happily test them.

I’m not sure if there is a specific location. All these crashes occurred at different spots. Riding along the eastern and western coastline seems to be fine. Apparently, crossing the island from the north to the south across the areas surrounding the tower is what triggers the crash. Since I finished building my Code Vein cathedral on Siptah, I can try to replicate the issue by riding across the island repeatedly.

Are you playing on an official server? Could it be mod related?

The OP indicated that they played without mods so the issue is not related to modding. Myself, I play single-player and I do use mods. My guess is that it is either an undermesh exploit prevention related issue or some of the assets (ship parts?) fail to load when the player gallops across the land and the game tries to load the next part of the landscape. My game is on an SSD so disk transfer rate should not be an issue here.

Not sure at all. Had some crashes like said lately, but it’s still hard to reproduce such things.

There are several reports over time at these locations, some mention also massive fps drops when looking south, what i couldn’t reproduce nor. May differ from server to server to, maybe also connection.

It happened to me long time ago. Fixed verifying files on steam.

That was the first thing I tried. Did not help.