Dedicated server is taking a long time starting up

I have a dedicated server at Host Havoc, that is taking an incredibly long time starting up. I suspect it has something to do with the excessively amount of logging the server does during start up.

Normally the log file of a 24-hour period is roughly around 80MB, but lately the same period results in a log file that is more than 320MB.
Of these, the first 300+ MB is logging from the server start up. Most of these some 1.5 million lines are like this:

Does anyone have any idea of how to reduce this insane amount of logging, and thus (hopefully) reducing the startup time?

That looks like one of those mod errors that popped up after one of the September patches. Take a look at which mods you have that haven’t updated recently, those might be the culprit. They’ll simply need to be recooked by their mod author to fix the issue. If the mod author is still maintaining them.

One another note. How old is the database and how many mods are you running? Probably should just post the modlist to get that troubleshooting step out of the way.

Any mod updated before September 2020 will be suspect for not working properly. That would be the first mods I would test.

According to the server list the server age is 142 days.
So, I suppose that’s the age of the database

Is Skimpyt.pak = Skimpy Armors (2018)? If yes, I would remove this one since it out of date. They changed the armor sets (temperatures and T4 levels) a while back so this would have broke.

Not sure what OneTest.pak belong to. Also 300.pak and AccessorEquipment.pak.

These mods I would check first. The others appear to be okay. This should give you a start to resolve the issue. Try these mods in Single Player to see if you can even get into the game.

According to the server list the server age is 142 days.
So, I suppose that’s the age of the database

142 days is a little on the older side, but unless its a 70/70 server with a large community, it should be fine. The smaller servers with not crazy amount of mods can go 300-600 (or up to indefinite) days no issue. Do you know the size of the database? The larger it is, the longer it takes to load.

Also follow the steps Sir.Henry.Vale gave. He’s pretty much hit it on the head.

I would say any mod that has not received an update after 20 Aug 2021 can be causing the log issues. The logs can be filtered. This is not going to resolve the issue but it will help with the loading times: 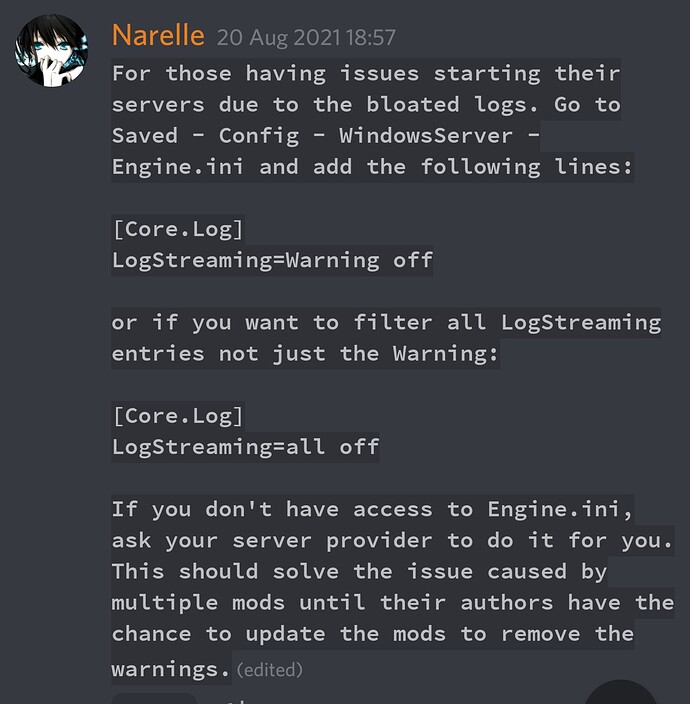 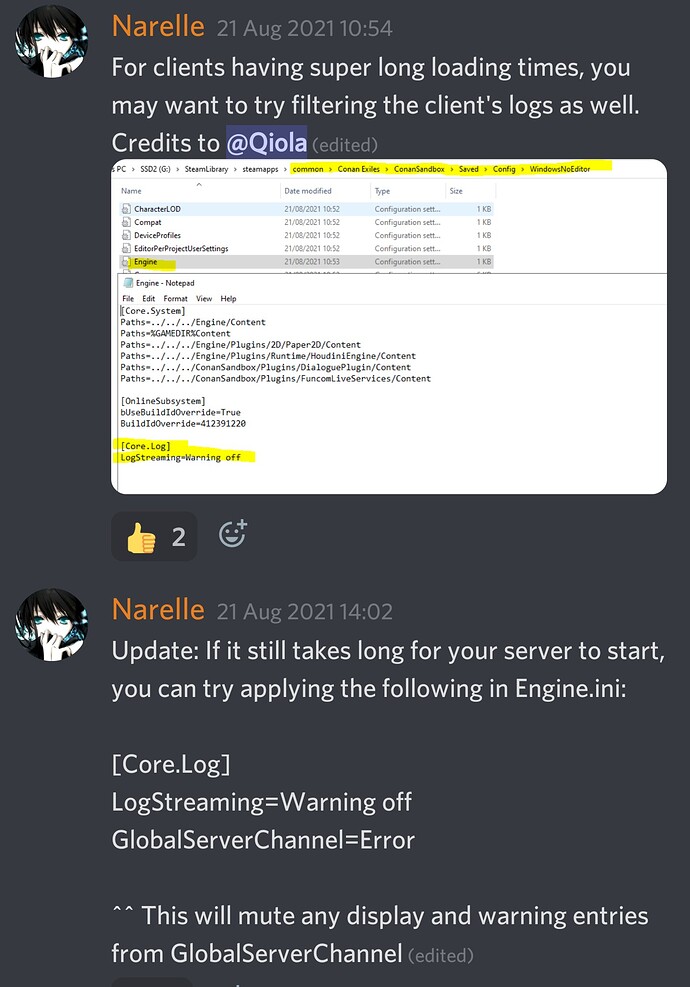 Okay, I’ve been doing some fairly systematic testing, and it appears that most mods that hasn’t been updated since before August 20th adds several megabytes of lines.
So, there certainly seems to be a direct correlation between the older mods and the size of the log file. Which is caused by the DevKit update to version 2.5 (I presume).

The log filter works great, btw, by is really just treating the symptoms, not the disease, as it were.
Thank you all for your input, it has been invaluable.