I already posted this one in the A few things to note thread. I was in a hurry to post and hadn’t read the bug reporting guidelines at that time. Sorry.

I’ve been to the Captain’s Quarters in Buccaneer’s Bay 5 times now. I haven’t gotten the Scourgestone piece that used to drop from the named NPC exile on any of these trips. 3 times the NPC was Hekr Waverunner and 2 times Gall o’ the Spear Dinn.

I’ve gone through the entirety of Buccaneer’s Bay and haven’t found the Scourgestone piece. Although I didn’t kill the pirate queen. I don’t even know if you can kill her.

So this makes me wonder if this is a glitch or if the Scourgestone piece has moved to another location.

The First Mate, whose name I can’t remember, now carries the stone pieces. I’ve pulled them off her several times lately.

She’s at the location below the Captain’s Quarters.

Sounds like Hekr has been fooling around and not keep an eye on his coin purse.

I would delete this thread but it seems I don’t have permission to do so. Sorry.

No reason to delete the move of the loot table may not have been intentional.

Does she still drop the salt cutless?

You sure you got the stone? Because it seems like it is still missing…

Re-ran the bay last night. Got the stone from Udina(?) on the platform about 2/3 up to the captain’s cabin.

I even linked your comment and also thought you mean Udina.

Game mode: [Online | multiplayer PVE] Problem: [ Bug? | Region: Europe Germany server] Hello there, I have visited in Buccaneer Bay at the Captian’s Quarters. Then when I arrived I killed T4 npc Gall o the spear-din / Hekkr Waverunner but they dont drop the Shattered scourgstone item… has it been change to a different location?? Or is the dropchance super rare??? I killed them like 30 times but no shattered scourgestone pieces… If this is a bug when is next upcoming patch for ps4 europe? b…

At least in PS4 she hasnt it…

Did she still drop the seasalt cutlass?

I have never gotten the cutlass from anyone. I get the stones from her every time.

The other guy in the thread said, he got the cutlass

I really wonder who you are killing

This is near Flotsam at the captains quartier? Not at the black galleon (because THERE is a first mate).

Perhaps I should be clear, again.

Kill the guy and the two panthers at the wooden bridge to go to the galleon. Kill the various pirates and walk into the hole in the hull. Go to the left and up to the rear. There is usually a cook here, and sometimes a panther. It depends if someone else has run through the ship without stopping.

After more killing, continue straight. There is an opportunity to turn left and go up. If you go straight, there’s a platform with Udina (I believe that’s the correct spelling). Kill her, collect the stones if you’re me, but never see the cutlass. Then, do whatever the crap you feel like doing.

I should be home soon and will test that today. Will report back what I found…

Edit: on the way to Flotsam

So I think you mean someone else… 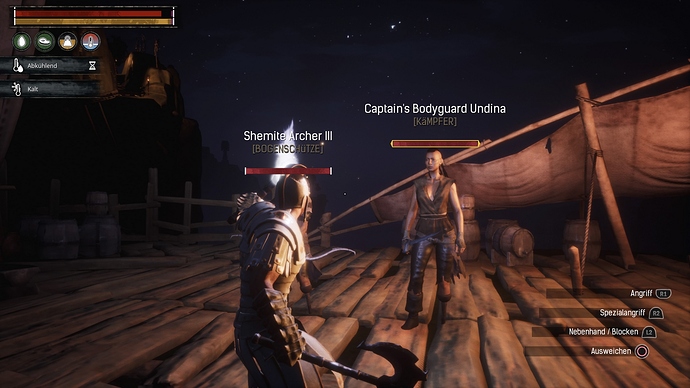 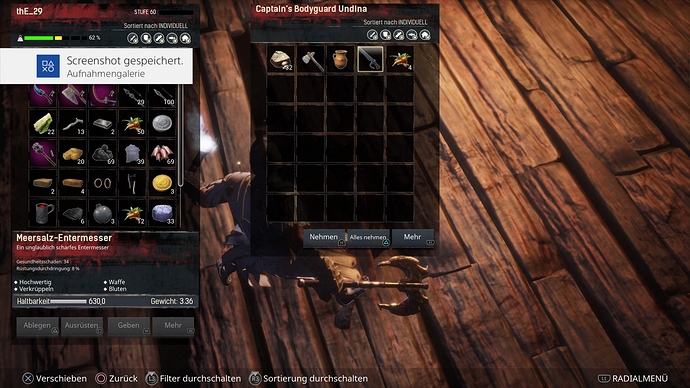 No stone, but the seasalt cutlass.
Official PvE server PS4

Just went to check on the bodyguard and whether she drops the Scourgestone piece. For me on PC, SP, she didn’t. She did drop the Cutlass though.

I did another runs again and found 2 Gall o the spear-din?? at the same time. Is that supposed to happen or bug as well?? 1 was at the Galleon and the other at the beach or next near the cook on Galleon. Still same result, only the rarest drop I got was that star metal ore and undina drop still that weapon. Also that undina randomly spawn near the cook as well.

I also encountered him 2 times there on this run through… but had never the stone.