Hello, greetings to the whole community.

I have a question this is a trick or how can you have so many attribute points? I am fighting with a clan and they carry these attributes all the time, how is this possible? 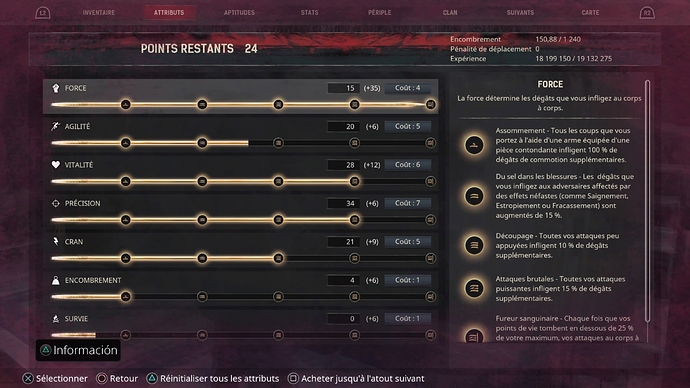 Is this on a private server?

No, in oficial server

I guess this build is part gear with buffs and part this: https://conanexiles.gamepedia.com/Tablet_of_Power

Maybe not if it only gives feat points. I haven’t tried it.

This screen shot is not real for officials…look at the enc. this is from a private server, or if sent from someone, they sent you one from a SP game. To get 1240 ENC without spending points, they would have had to do the admin adjustment (not available on official .db i was told) and add the enc manually in the commands.

Maybe not if it only gives feat points.

it does give only feat points.

As I comment, the photo was shared in their chat and since then they are difficult to kill. I at 4 strength do not hurt them with the blows. they with two arrows kill you.

but since the encumberance shown on this screen has been adminpannel up to 1240 it must be a screenshot from a private server .

Thank you, I will try

So berserker draught gives +35. Good to know, I never used that but I have at least 200 of them

That’s why the screen is pink(?), I thought it was taken in a corrupted area.

https://conanexiles.gamepedia.com/The_Archivist's_Assistant
These books he drop adds +4 to everything:

So based on the points themselves it is possible, but that encumberance, is too much. On admin panel you could press ++++++ to the encumberance without spending/increasing attribute points as @Kanza1 said.

I will test on the private server and then on the official server.
I know that if you use a book and then a fish does not add the extra points overlap.

The origin of the screenshot is doubtful, it could be that
The screen looks pink, because I was in an obelisk just when they shared the photo, I made the picture at the moment.be from a private server and have a few more points. The funny thing is that he shared it with his clan to assign the points that way and now they are very strong, I have used the set daggers to subtract the extra points.

thanks for the info.