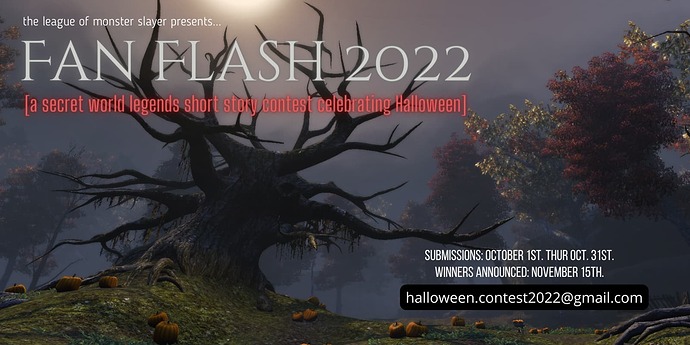 To celebrate the fall 2022 season in Secret World Legends, we are announcing a short story writing contest sponsored by the League of Monster Slayers. Prizes will be awarded to the top 3 stories as decided by our judges, and the winning stories will be posted on the forums for everyone to enjoy.

Theme:
The theme of the contest is on Halloween in The Secret World. Please write an original story featuring our favorite holiday in the game.

Please submit your entry with the attached document and necessary information via email to:
halloween.contest2022@gmail.com

Start date : October 1st 2022
Submission deadline : October 31st 2022 at 23:59 (EDT)
Winners announced : On official Funcom forums on November 15th.
The stories for 1st, 2nd and 3rd place will be posted on the forums, as well as any honorable mentions.

We look forward to seeing your take on Halloween in the secret world. Good luck to all!!

seems i cant either missread the amount and im +1000 words

We have decent amount of entries that are horror themed, but not necessarily Halloween themed… Please make sure to follow the rules by following the theme, AND, make sure to add your in-game name. Thanks

Thank you all for the submissions. We will be reading through them and deciding the winners by the 15th.

I’m was happy to see we got a decent amount of submissions (enough to possibly do something like this again), and even though Halloween is over, we can all enjoy the winning submissions to the Fan Flash contest. So without wasting your time with too many words, here are winning stories. I will be contacting the winners about their prizes in the next few days. Congratulations!!

In The Service Of Gaia

“ONE MOMENT, I’M COMING!” I called out as the insistant buzz of the doorbell shook me out of my
anima-induced trance. Groggily, I made my way to the door: no urgent summons or message on my
phone, who on Gaia could it be?
The floor’s lights died the moment I opened the door, the sudden gloom barely revealing indistinct
shapes gathered in a half-circle facing the entrance. What the… I shivered as I realized what was
gathered in front of me:
“Trick or treat?” a cherubic voice called out to play from the darkness, malevolently glowing eyes and
a far-too-wide grin of glee splitting a far-too-pale visage on a far-too-small body in the gloom as a
sinister lullaby resounded in an abandoned parking lot…
A pumpkin head upon a grotesque body barely discernible in the shadows… Hysterical laughter and
grasping vines, being ripped apart or disappearing into the abyss…
A visage weeping tears of blood brandishing sinister blades… One of the many Filth-corrupted
madmen serving a long undead king, mumbling incoherent praises to an Sun God as false as uncaring
and ready to maim and burn any standing in their way…
Lupine maws atop crouching bodies, opening to howl and rend… The hunter becomes the hunted,
the boom of a shotgun against the background noise of a windmill’s sail flapping as a vicious battle
for survival unfolds…
Black eyes, lifeless eyes in the face of what looks like a bipedal carnivorous fish with webbed, clawed
hands… Abyssopelagic dwellers from the deep, called to the surface by the madness unleashed…
I took a step back and spread my arms, gathering anima. If the Dreamers wanted payback and had
sent their servants after me even here, let them come!
“Mister…?” The tiny voice and the returning light shook me out of it and called me back to the
present to what was nothing more sinister than a gaggle of children in front of my door, the oldest of
them looking a bit sheepish next to the floor’s main fuse. All Hallow’s Eve… It’s Halloween night
tonight… Just children playing a prank…
“…Well done! Great costumes!” I forced a smile on my visage as I stood down; or tried to. “You really
had me going there!”
Quickly retreating to my kitchen, I grabbed whatever I had lying around and moments later I was
back handing out handfuls of sweets to a chorus of eager giggles and smiles. Now that I could take a
good look at them, they were barely even looking like the genuine monsters, serial killers and other
werewolves I’d faced recently. And yet…
‘Gaia…’ I shivered with dread as I slouched against the wall when alone once more, the ‘little
monsters’ gone toward their next prank; wings of pristine light still on the cusp of manifesting at my
back. ‘What have I become? What have I become…?’

Such a man it was, Mr Spruuge: he was a man of jolly disposition and always ready with a warm smile.
But even such a man, when the windy September was replaced by a darker October, couldn't avoid
feeling a sense of unease, as if a mouse was squirreling within the depths of his soul. And none of the
jokes and laughter helped him dislodge the awful disquiet of his worried spirit. << It is all about All
Hallows Eve >> he said angrily. << Such a cruel, useless and obsolete holiday. >>
That was an unfortunate truth: Mr Spruuge despised Halloween. << Ostara… that is a most proper
holiday. As it’s Yule. >> he said as a comparison. And just like that, he chased away all the shadows
creeping on him.
One night, however, a strange dream swallowed him like a whale to a wooden boat. Poor Mr Spruuge
saw himself barely a kid, running down dark streets, chased by shadows and ghosts. In the dream he
remembered. The fear he once felt rose into him as water when walking into a bog. He cried and
shivered until a door suddenly opened, flooding the road with light and silver laughter. A little brown
pumpkin was shoved into his little hands and all the fear melted away in chocolate bliss.
The second night, Mr Spruuge dreamt again. This time, he was the one behind the door, and looked at
the kids running and playing in droves. Whenever they appeared scared or confused, he opened the
door and bestowed candy to the lost.
The day after, he woke up with a smile. << So, this is Halloween, then? It is not that bad. >> and he
mused on how to change his opinion, thing he did rarely, if ever.
The third night, the dream swallowed him again. This time he dreamt of the fog coming from the sea. He
dreamt of rusted iron, a scorching sun and dark woods. And in the dream he saw - he saw very clearly -
the real monsters hiding silently behind spooky masks. His mind broke the veil, while what was beyond
the veil broke his mind.
<< So, this is the real Halloween. >> he said when he was finally awake. He still felt the dream inside.
Growing. Gnawing from within. << It longs to get out. To become real. >> he whispered slowly. Lastly he
smiled, but it was a very sad smile.

It is known that Mr Spruuge took his life that night. But people say that he can still be seen, in the nights
just before Samhain, dancing on the hills and laughing. After so many years, he is but a skeleton now,
forever grinning in a mockery of his previous self. As a dare, some would walk up to him and ask “What
is the secret of Halloween, pray tell?”, but even then he would stay silent, merely turning his bony head
to suddenly wink.

The Writing on the Wall (as seen by Sheriff H. Bannerman)

It’s Halloween 2004 and Bill Dexter is passed out in a cell. Trouble down at Susie’s Diner.
Allegedly it all went south when Joe Rogers mentioned some club they used to have back in
middle school. Bill went off on a drunken rant about “disrespecting the purpose of the
League”, Joe didn’t see the writing on the wall and down he went. My husband finished
stitching him up half an hour ago but Joe’s already clear about not pressing charges.
Four-year-old Kyra is wearing an adorable Incredibles costume. She’s gotten comfy on the
couch washing tonight’s candy haul down with the hot chocolate I got her. All caught up with
her crayon drawing of horses and warriors I had saved since her last visit. A trooper if I ever
saw one.
Ami is saying how great it is to have us around, assuring me that Bill’s no trouble at home,
never harmed her or Kyra. I tell her relapsing is common around major holidays, and in this
case the witnesses are not clear on who started the altercation. Then I give her numbers to
call. Places to go. I’ve often wished I’d had something better to tell her.
A few years later Ami finally up and left, more by way of her own spirit than anything else.
Even with all hell breaking loose this past year her and Kyra still seem happier than back
then, filled with purpose. When Bill went missing last October I thought “good riddance”, at
least for a couple of days until the fog rolled in on Halloween. Since then I find myself
wishing that I’d listened to his ramblings. I guess him and Ami had something in common
after all, something that no one else could really wrap their head around.
And now it’s Halloween ‘13. Us townsfolk, along with the Wabanaki and our new secretive
friends, have been busy putting up wards and driving back the different flavours of unquiet
dead. We’ve earned ourselves a respite, and while Andy is apparently grieving for his
childhood kittens I stick to worrying about the living.
A while ago that Annabel Usher character told me she’d seen lights on at night in that
ginormous treehouse. The Dufresne kid’s been receiving weird notes about “rekindling the
flame”. Reverend Hawthorne’s hard at work in the town archives after an anonymous tip
about the Illuminated Ones being behind some questionable psychiatrical procedures.
This morning there was graffiti all over the side of the Lobster Trap. At the top it said WHO’S
BEHIND THE FOG? WHO BENEFITS? followed by

And, curiously, an eye-and-pyramid symbol in the corner. Now, there are plenty of folks with
weird theories and grudges on this island but I’ve a hunch about this one. Looks like Bill’s
still out there, damned if I know how, and he’s after another brawl. Who’ll be there to set
things right this time?

congratulations for the winners <3

Congratulations to the winners, what lovely stories!

Thank you UC for running the contest!