I thought I would share my entry in the “Temple of the Gods” building contest. This is the best I could do with what little time I can spare these days. It was all built in single-player on PC, without any mods. 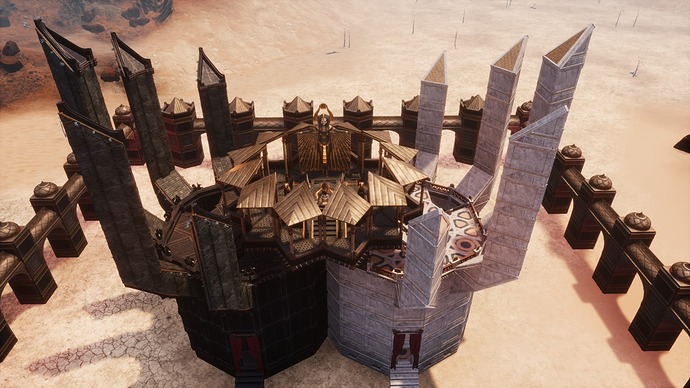 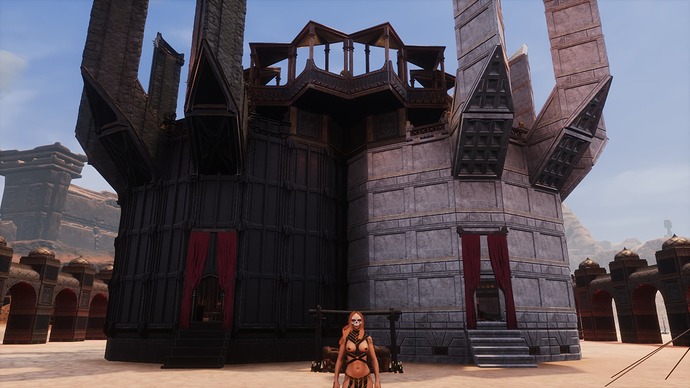 image1920×1080 155 KB
Upon approaching the Hands, the Guide will help you decide which path suits you the most on your quest to get closer to the Goddess. 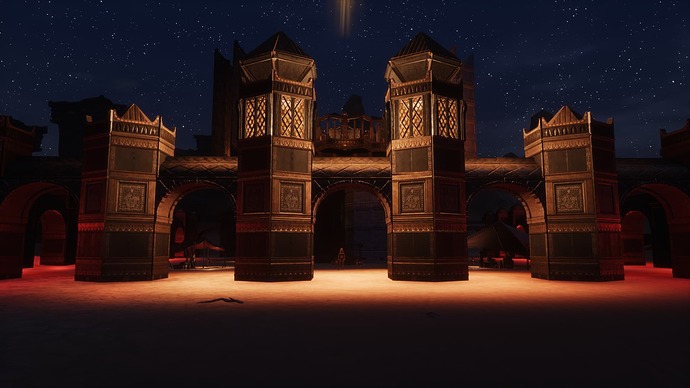 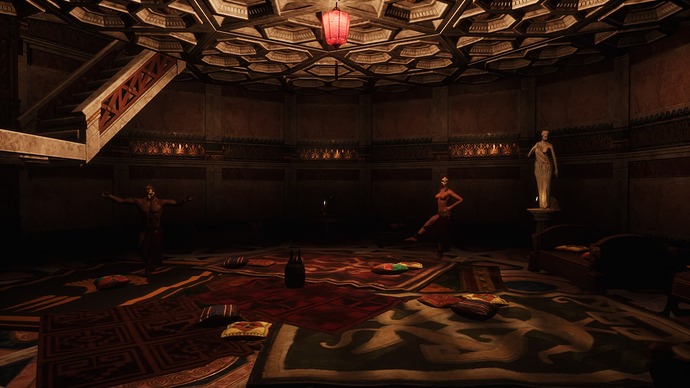 image1920×1080 144 KB
The first floor of the Right Hand is dedicated to the sensual pleasures the Goddess offers. There is plenty of space to … get busy. 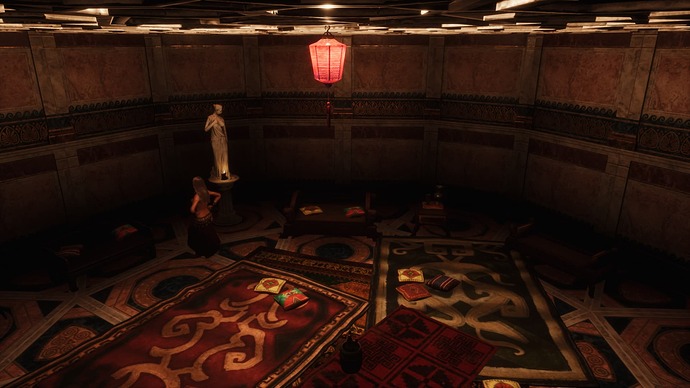 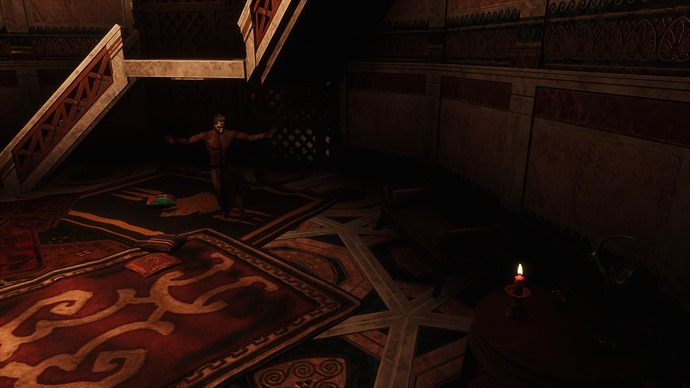 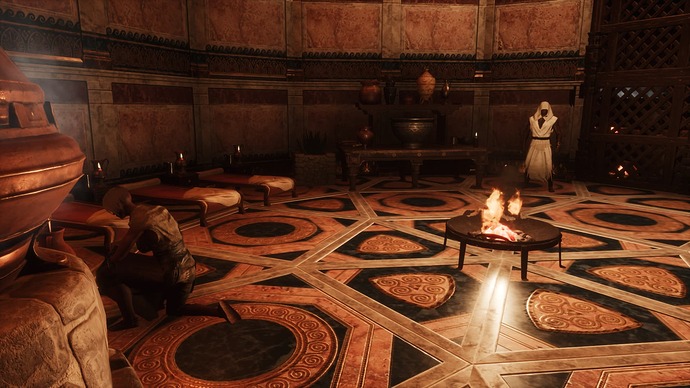 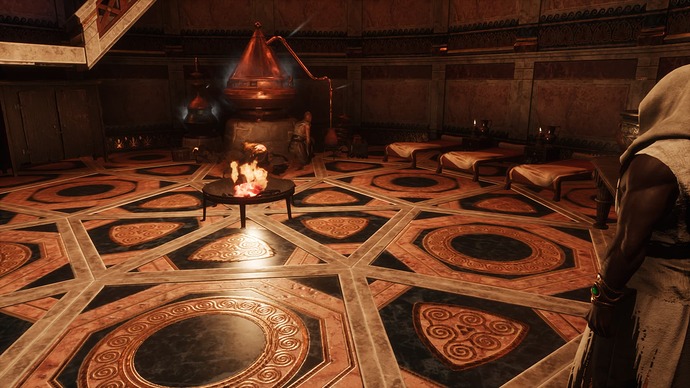 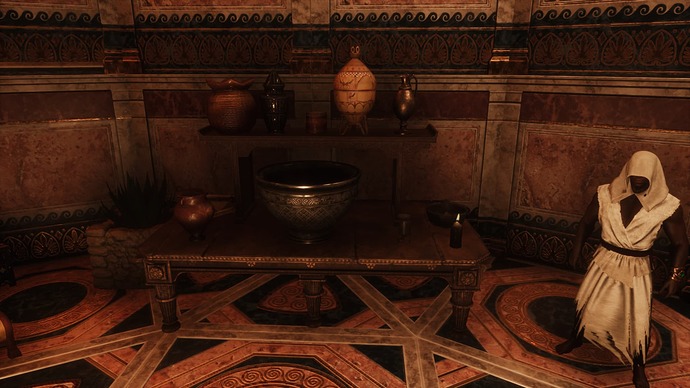 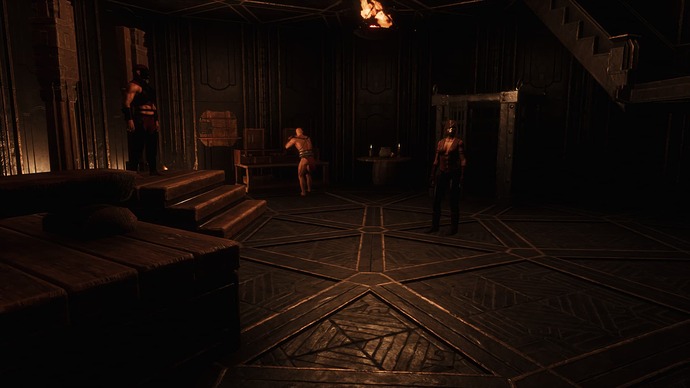 image1920×1080 100 KB
The first floor of the Left Hand is an ongoing celebration of lust and pain. Whether you like it rough or you like to get rough, the acolytes will help you offer up your darker urges as a sacrament to Derketo. 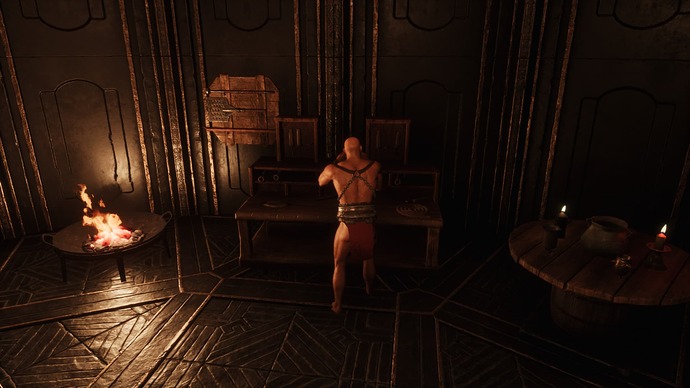 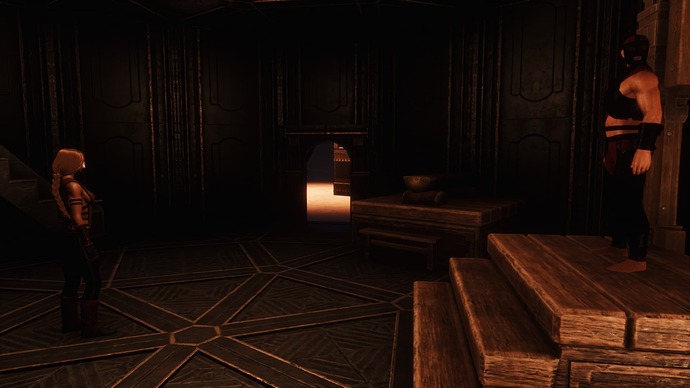 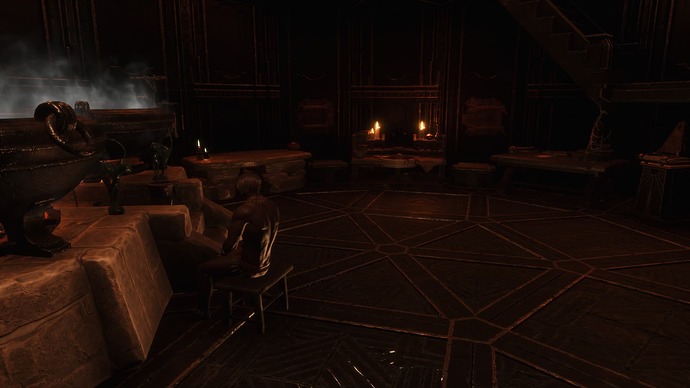 image1920×1080 85.5 KB
The second floor of the Left Hand is dedicated to the mysteries of death and the study of the inner workings of mortal flesh. 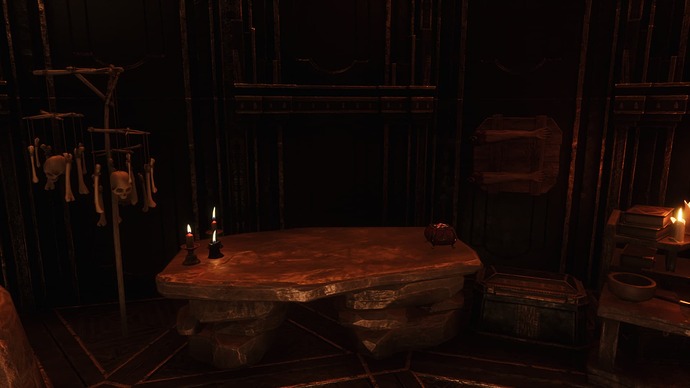 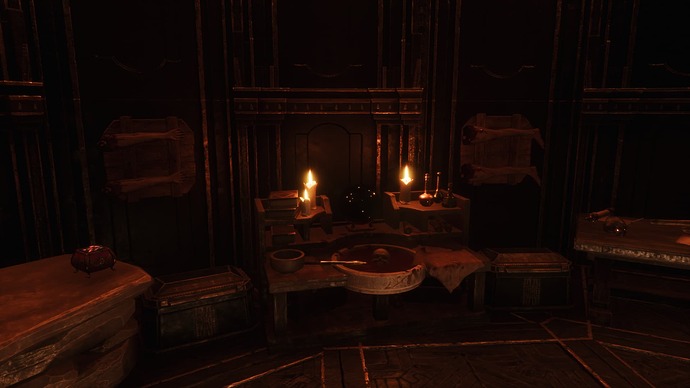 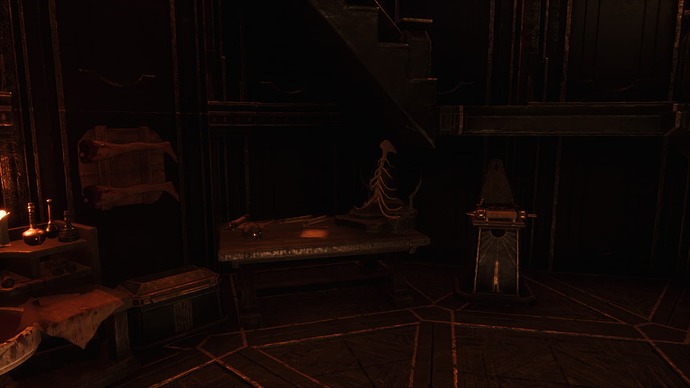 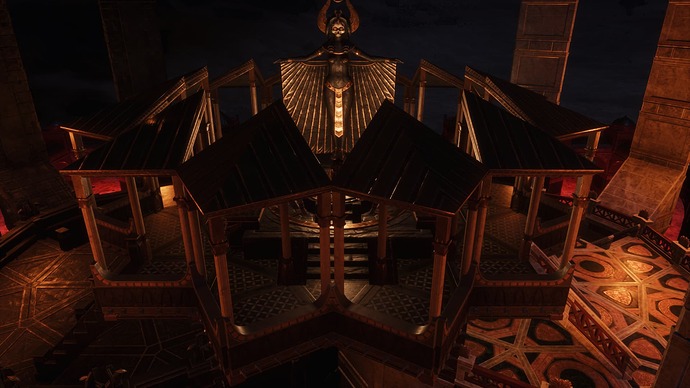 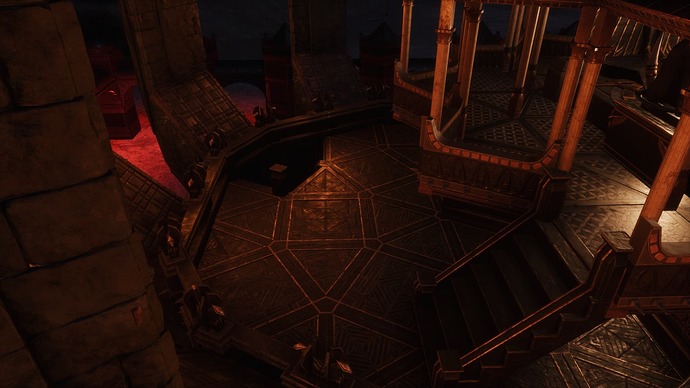 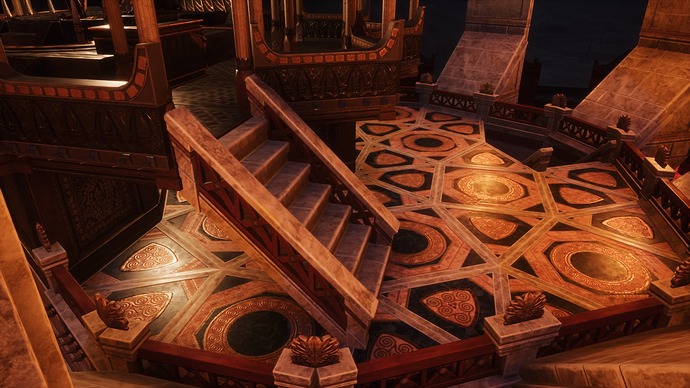 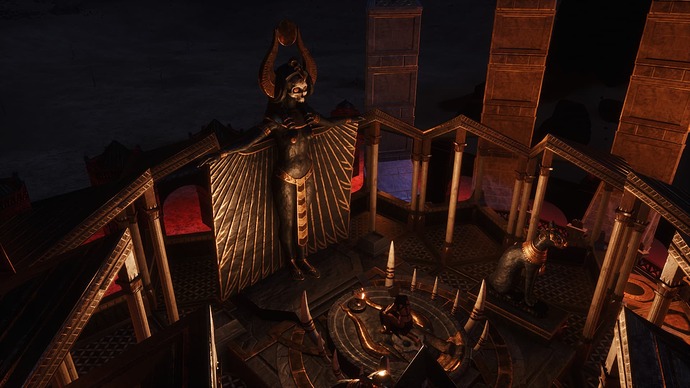 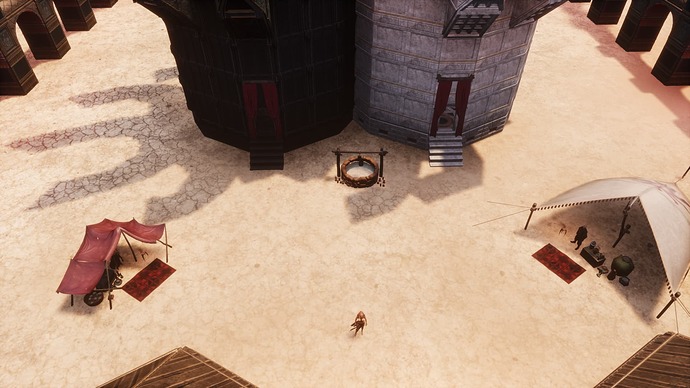 image1920×1080 160 KB
Before you approach the Goddess, you can stock up on odds, ends, and sundries you might need before, during, or after your worship. 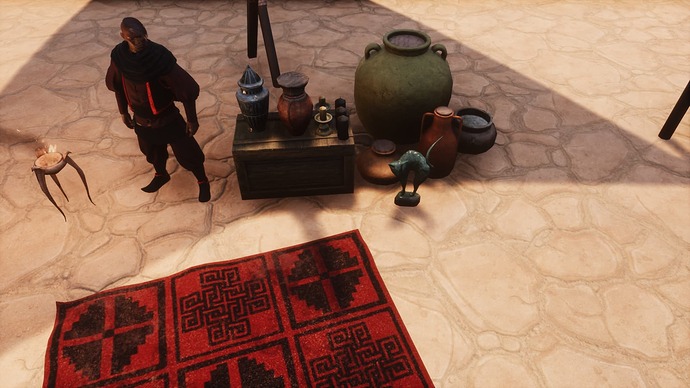 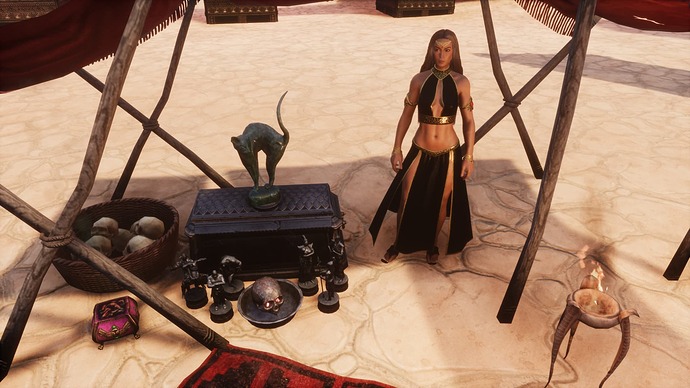 @CodeMage
MAGNIFICENT
We both know that we are going to see wonders to applause in this contest. Some will do a cinematic presentation that will give to their build another dimension, yet the greatest bet in these contests is creativity and inspiration.
I see both, so

Ps. Do I have permission to upload my original vision for this contest?

Good idea, rp, no mods, consistent. It lacks decoration and the two entries lack work. Some parts are too simplistic and do not create the immersion I would have liked to see. But it’s understandable with the deadline.
Nice realization. You’re in my top 3 with everything I’ve seen on youtube so far.

Really do like this. No wonder I didn’t consider giving it a try definitely have to show this to my wife. Good job @CodeMage .

It lacks decoration and the two entries lack work.

Yeah, I suck at decoration, especially the interior design. The one thing I can do decently is come up with fun architectural structure, and I can also add large-scale decorations like statues. As soon as we get to smaller details, like furniture, carpets, tapestries, and whatnots, I’m way out of my depth.

This is actually better than I used to make before, in terms of decoration

But yeah, I’d love to learn how to do it even better. This is already useful feedback as it is, but if you have any more concrete advice, I’d love to hear it.

Ps. Do I have permission to upload my original vision for this contest?

I’m not sure what you’re asking. If you want to submit an entry to the contest, it’s still open for another 4-5 hours. But you need to send your entry to Funcom via e-mail, as per their instructions.

I’m not sure what you’re asking.

I think he was just asking if you were okay with him posting his entry here to show you as well.

In Zembabwe she has kept her name Derketo but is married to the god Dagon, some orgiastic ceremonies re-enact the mating renewing the world of Dagon and Derketo.

The devolved drowned Insignia could be used.

The symbol of Derketo is the fish, representing its powers of fertility and life, and in Shem it is frequently associated with the river of life, the Styx.

But if you’re more into delirium with set. You could add some details reminding it.

Possibly place the building near a river. And fish traps.

My original idea was to build a temple on the frost side of volcano. This difference is so beautiful 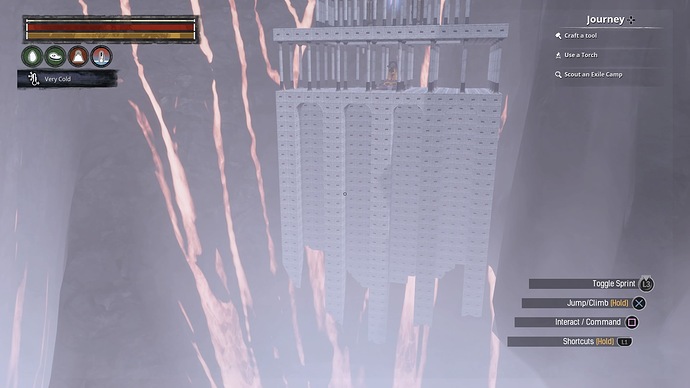 At the time I was building this white construction to make a great contrast with the black and the red of the environment, I wanted to use a creative lighting so I fix this lantern. 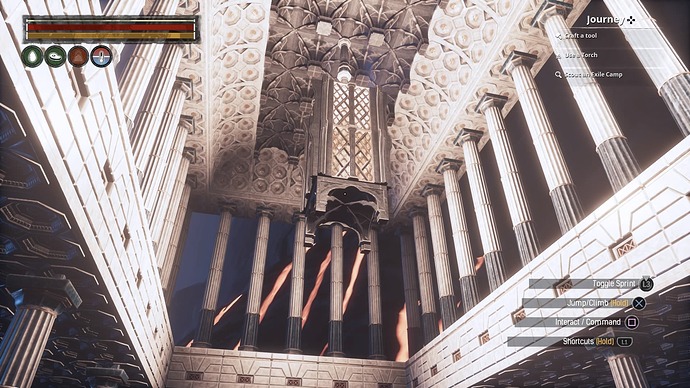 I liked it a lot and I use them for contrast lighting, to break the white but to match with the environment colors 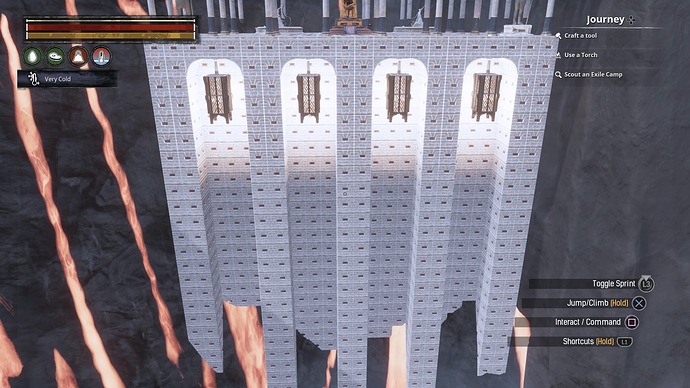 The temple needed some decor but first I had to create a colossal path so people can visit the temple. After all what is the point on a temple if people cannot visit? So I started building, in this photo you can see only the one third of the colossal path… Why? 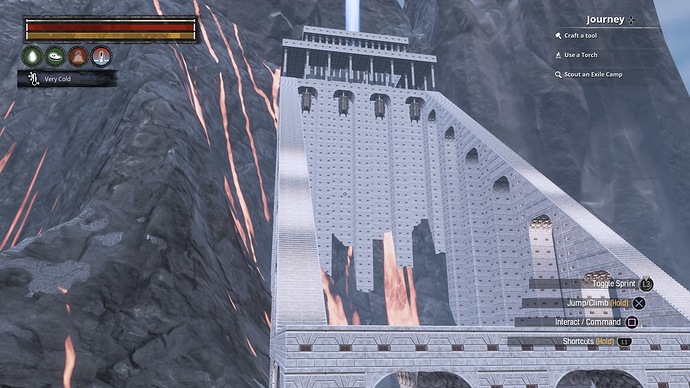 PlayStation had psn maintenance, I build this day a lot, over 30.000 foundations. It was a good chance for me to give all my gaming energy to this build. Yet…
The other day I log in to void…
Everything was gone, lost, everything…
For a moment, or a bit more I lost it, I said I quit…
Naaah, I didn’t I fixed another one, smaller thinking of @Ragnaguard wish to see my entry in this competition.

I am not a great builder, but if I have nice builds I give it to all of you that inspire me all this time trough forum and discord. Thank you all

Well found for the lantern!

It lacks decoration and the two entries lack work.

It is a temple not a whorehouse.

It almost looks like the temple of Thulsa Doom, very nice.

At the time I was building this white construction to make a great contrast with the black and the red of the environment, I wanted to use a creative lighting so I fix this lantern.

This stuff is great! I especially loved that interior shot with the white vaulted ceiling meeting the black vaulted ceiling, and that colossal lamp concept is awesome!

I have the exact same opinion about temples. They must be at least huge, low decorated, some greens and statues, huge paths and stairs, careful lighting, so the must of the temple is the God that you pray. After all a God cannot live in tiny house

Yet, this is a game, it should have no rules because it is just an objective fantasy of any individual. Like I said in the beginning these efforts must have creativity and inspiration. I really hope I get 50% of this goal.

The greatest gothic temples of the early and middle ages were pretty stark inside, but magnificent outside. The Basilica of Saint-Denis, Notre-Dame, Cologne, the Cathedral Church of Milan, all were mostly bare inside until the renaissance period.

The focus should always be on the worship of the god of the temple, so I agree, keep it simple inside.

Manhood potion and gray lotus go hand in hand. You could add gardens with gray lotus.

I totally forgot about the gray lotus! Man, that would’ve been great. I was trying to think of something to add in the empty area behind the temple, and I briefly contemplated a garden, but I skipped that because: 1) I was running out of time, and 2) I didn’t think gardens were Derketo’s thing. But gray lotus would’ve been just the thing!

Not sure but add wallpaper to the walls.

This is where mods would’ve been useful. Vanilla game, with all its DLCs, doesn’t have a lot of applicable decorations of that type. I don’t like the base game tapestries, because they’re pretty threadbare. I wanted the chamber to look classy. Khitan tapestries look classy, but they’re thematically inappropriate. Argossean tapestries are also thematically inappropriate, but even if they were, they look “cardboardy”, not very realistic at all.

The devolved drowned Insignia could be used.

The symbol of Derketo is the fish, representing its powers of fertility and life, and in Shem it is frequently associated with the river of life, the Styx.

Ouch. I forgot about fish, too. That’s an excellent suggestion.

That was literally added on the very last day of working on it. I submitted this entry past midnight in my time zone, with less than 24 hours left before the contest deadline, and I couldn’t stay up too late because I had some important stuff to deal with the next morning.

I wish I could’ve done it fancier, though. Maybe if I hadn’t spent so much time at the beginning of the contest, playing with different concepts for Set and Ymir.

Anyway, thanks a lot for the detailed feedback. Like I said, decoration is not my forte, and I appreciate advice on how to do it better.

The focus should always be on the worship of the god of the temple, so I agree, keep it simple inside.

I agree, but in my case, the worship was supposed to be very, um, tangible.

i would really love to! and it seems promising!!!

i also started a build just to get the spirit of the contest, but when i seen that mods were allowed i stopped it!! i am really curious about what each one of u will come up with , and which religion each will choose!!!
so lets hope to see all entries

I just wanted to mention that @Rollotomozi created a topic for everyone who wants to share their contest entry:

I am creating this post for folks to share their submitted creations if they wish to do so. My Creation dedicated to Crom: [image] [image] Video link - Google Drive: Sign-in