Lands of Chaos is an 18+ PVE/RP server with a chill atmosphere and a friendly admin ready to help any new players get started out. Most important rule changes are as follows:

Server Premise:
There is no set rp lore or restrictions to your character, so the story is driven entirely by your actions. Start out as an exiled and forge your path to become anything you can imagine, even rising to the ranks of your own nation leader with your own city.

The server includes a total of 26 mods, with the most notable features as follows: 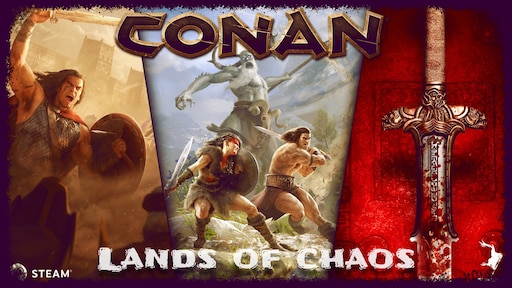 Steam Workshop: Conan Exiles. The specific mods used for my server Lands of Chaos, an experimental 18+ RP/PVE server. This is also the load order for the server, so add them in the same order to avoid mod mismatch issues.

The server is still fresh and has plenty of room for people to build. Any clans or individuals looking for a new server should check it out. I’d be delighted to see you there!

Its currently a WIP but i’ll soon be adding a series of custom quests to get the siptah delving bench, siptah gear and repair resources through repeatable quest chains.

Lots of QoL changes made. Added EEWA items to shops, increased number of available things for sale, turned off building abandonment, made map rooms at all the obelisks, tweaked thrall conversion rate and crafting rates to make things a bit faster, increased t4 spawn rate, finished the arena master quests so its possible to get delving benches, eldarium and eewa gems off him.

Come check it out! I’ve had over 1500 hours on conan and this server is the perfect blend of PVP and RP, with some of the best mods!

Added a few extra things. WIP castle has been built in the city for roleplay purposes. Beyond Theatrics mod added too. Few extra details added to the initial post as well.

So the server has been changed from a PVP server to a PVE server with battle standards for PVP. An arena specifically for PvPing will be built soon.

A warp hub, solo boss arena and 2 new outposts that have most of the custom thralls from Thrall wars mod have been added.

A co-op raid dungeon has been added which contains a total of 3 raid bosses and has a unique loot table for the normal mobs that drop a lot of the custom materials from DungeonMasterTools and Thrall Wars such as chromium, beryllium, atlantean powder, eldritch powder etc.

The server is really starting to take off now. If you are looking for a server that has a decent player base and is actively populated but still has space to build then come join us!