The graphic for when you are in shelter is covering up half of the HUD icons, water, food, weight and temp. It tends to stay on as well, really had to move about to get to disappear and when it did come up again it still covered half of the icons. Not sure if it makes a difference but the game was exited / saved within a building.

Was not to sure if it was because of the new update changing the game so much so I started a new game, it is not just the shelter status that blocks the HUD, all the status effect icon displays are the same, some of them are half off the screen now, soothing is half behind the four main icons, water, food, weight and temperature (see image below) 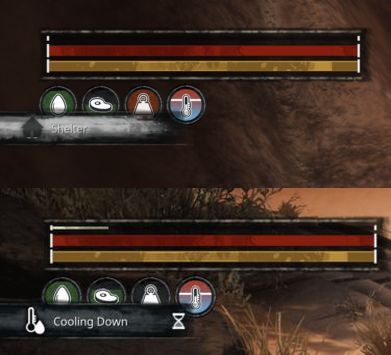 Hi @Darkspire, we’ve sent note to the team regarding this issue, thank you for the detailed report!