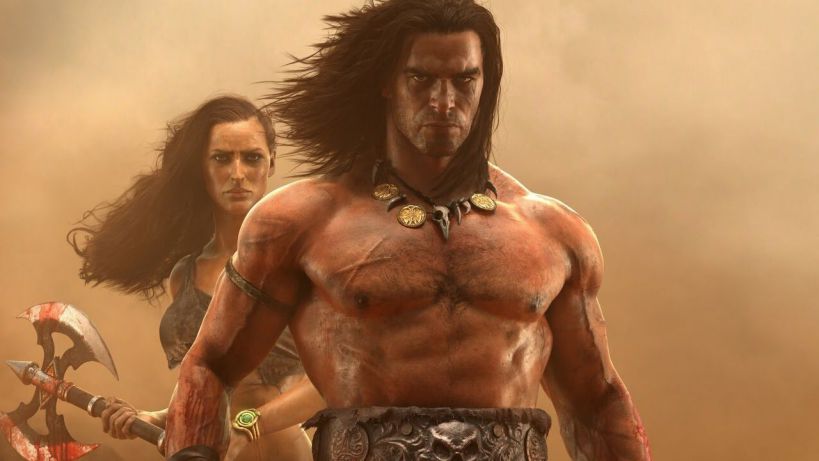 I just wish these patches would come with punitive fixes, like a db audit that scans for players with all max attributes and deletes their characters or something. Or maybe even scripts/logic on the server that picked up on duping and deleted inventory on restart

thx so those 3GB are just for that DLC right? xD

I suppose so, but I’d like to have some fix too: panel sliders (PS4) still not working, music died and glitches are running wild brother, hope sumthang maybe will be fixed (I’m still dowloading it so can’t say anything 'bout it)

I would hope that they will soon fix the bug with the human thralls… how long will it stand that they work only half of the time?

It’s the Riddle of Steel DLC, which was released on PC at the beginning of the month. Since it contains no other fixes or additions, we posted no patch notes. But you can read about the launch of this DLC in our announcement:

Flesh grows weak. Steel becomes brittle. But the will is indomitable. The Conan the Barbarian movie holds a special place in our hearts, as well as the hearts of our players, who often ask us what is best in life. On our anniversary we’re releasing a special Riddle of Steel DLC pack, our tribute to the movie. [1920x1080-(sans-logo)] Place statues of Arnold Schwarzenegger as Conan the Barbarian in your castle and sit upon the magnificent Lion Throne from the movie! Equip yourself with Conan…

The upcoming patch with PS4Pro performance optimizations and a few other fixes is still undergoing certification and will be released as soon as it passes that process.
Apologies for the confusion and thanks for your patience.

Wish i could like this 100 times. When it comes to cheaters and exploiters, if it is a cut and dry “you had to do this x times” to accomplish the exploit then ban for decay time plus 1 day on all officials those accounts, and any clan members. this would set a precedent, and start to weed out the toxic players before any new exploit gets out of hand. If the exploit could be accidental, ala dismantle bench, underwater stam glitch, etc…, then it would be hard to punish that severely, as some (or even many) may not have realized they were even exploiting. But if you have to go thru certain rituals multiple times, then you knowingly exploited for an advantage.

Sadly, I’m already hearing from exploiters that today’s patch did not take away their maxed out stats.
Perhaps NA servers need to be restarted first or there’s a specific server patch coming? Either way this is ridiculous that such blatant and easily detectable cheating could go on for so long.

I think this patch is more tied to the Riddle of Steel DLC for consoles.

Sadly, as much as I want it, i may not get it until i know that Funcom has serious plans for exploiters who blatantly use them (as in my post above). this from a guy who owns a private server, and has bought all DLC’s day one when they hit. I am going to start hitting them in the pocket book. No more DLC’s for me until i feel there is a true effort to weed out toxic exploiters. Anthem has banned many accounts, and from what i hear, even FO76 hits the major exploiters hard with bans. I just don’t like those games

I’m going to buy it anyways, I appreciate the artwork and DLCs. but yeh there’s a serious problem with exploiters who ruin competitive pvp gameplay. I wish private servers were the answer but unfortunately they just aren’t for most. My clans and I would even pay a monthly subscription for moderated official servers if that were an option. I also know it’s hard for one person to manually police thousands of servers let alone a small team doing other things, but fortunately there’s such things as DevOPs, custom monitoring and automation.
Practically anything the server logs or stores in a db could be monitored for certain anomalies and monitoring could trigger automation to resolve issues. Toxic players are always going to be there though, its just a matter of automating around their BS so less manual intervention is needed.

am i the only who have troubles to knock thralls ?

I am having building issues that where not happening earlier things not wanting to place. Wedge foundations disappearing as I work around the outer layer of second story
. This is new starting tonight. Ps4 private gportal server pve stability 100 no decay. Sandstone

Indeed. What is with that site? Why are they posting patch details that, at least so far as I can tell were not posted by Funcom? What’s up with that?

This update was for the Arnie movie stuff only, nay? (but where is that dlc lol)

Are you not able to find the Riddle of Steel DLC?

Well I didn’t go look in he store, I was too lazy lol, but it wasn’t on the game’s main page. I thought it would have been there.