On 19 February 2019, according to https://conan-exiles.com/ all official Asia servers were relocated from Singapore to Taiwan. I noticed a slightly higher ping both PVE&PVP my connection was fine, I did ask players on the session and they all saying the same thing that they are experiencing an unusual lag due to the higher ping (most of us are from SEA, so SG is good all-round)

The ping was like 60-80 in before, now it’s never goes below 120, we were frustrated and some players even quitted the game. I’m perfectly understand about the budget issue, we all know that SG is definitely more expensive than TW, so I guess I am going to have to deal with it.

But !!! until today (28 Feb) at midnight (GMT+8) all Asia servers were down for 4-5 hours. I logged in the game this morning and the ping is now at 200+ on every official Asia servers that I’m seeing on the list. 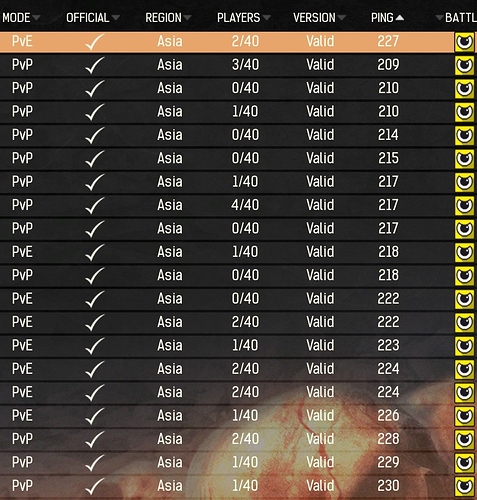 Again my connection is fine. Me, my friends and players are all seeing the same results.
Right now it is totally unplayable, at 200+ ping we are experiencing a massive rubber-banding, stutter gameplay and unable to properly climb.

I respect your call for relocation, but I doubt if there is something going on in the other end from the service provider, specifically ‘today’ when the ping spiked up after the servers restarted.
This is not just a slightly higher lag anymore, now it’s unplayable for SEA players. As you can see the populations among these servers in the past week are drastically decreased.

Please have a look into this
Thank you