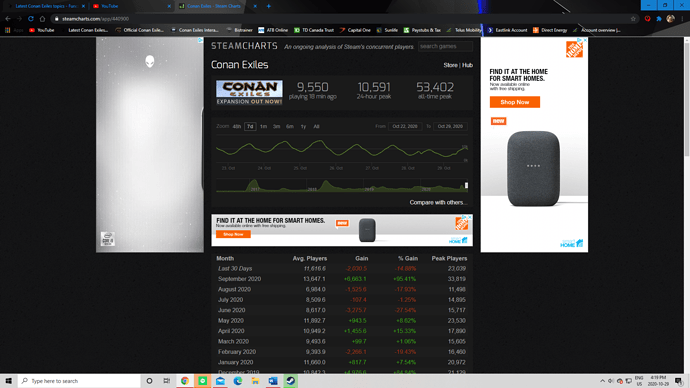 You guys really need to listen to your player base. Benches although a really good addition, have made getting thralls not a priority so to speak. Although might to be early to say much on this, we’ll see how things go over the next month it might be for the better.

Survival Perks changes are extremely hated, I personally think you guys need to go back and make Survival a lot more economic based, I really honestly don’t know a whole lot of people spending the points to max out survival, make it worth it and make players struggle to choose on survival perks and encumbrance when doing gathering builds.

You guys have such a diverse player base: PVP, PVE-C, PVE, role-players, causal players and the list goes on. First, every 6 months do a balance month with huge amounts of changes come fixes that honestly don’t always work their way in till later or have never been fixed.

PVE, economic issues, take this month to ask PVE, and role-players what’s missing what they’re upset about, and what they want and actually do it. Most of these are usually gonna be small adjustments like recipe changes, perk changes, being able to change thrall appearances etc.

PVP, combat changes, figure out what’s meta and balance it every year, listen to the ways that players are taking advantages of things and balance them.

These things should be done on the go but things slip, and I feel like if you did a player appreciation month every 6 months there would be a huge love for that and honestly get a good sense of how things are going before moving forward with further updates and changes. Also, let us in on some of the decision making host multiple polls throughout the months deciding on new features being added and things being changed.

I know what your going to say that’s what private servers are for but if you did 3 different rate servers you’d see a lot more people playing official servers.

Could be wrong on a lot of this, but I feel like this is how most of players posting on forum feel.

Cheers, and hope you listen to this and the other players reaching out you.