Game mode: Online private
Type of issue: Bug | Performance | Other not sure where i should place this…
Server type:PvE
Region: NA
Mods?: [ Are mods installed: Yes
Edition: Steam

I’m posting this in bugs as i saw another post about it in another area… but the issue is that the age of the server in the launcher is showing age 0 even though the server has been live for a little while now. a few months at least… i send a report to streamline servers asking about it and they don’t seem to know the issue as well… i’m including an image of the issue my server is at the top showing age 0 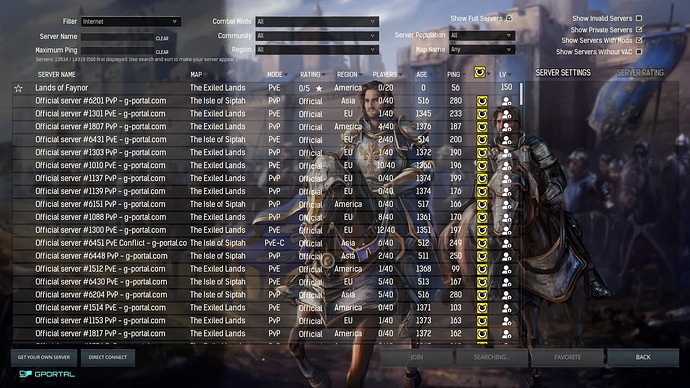 I just got this fixed on my Gportal hosted server. The rep didn’t see anything that would cause the specific issue, but “refreshing the connection with the server” fixed it.

UPDATE Sadly, the fix didn’t hold and we’re back to 0. Subsequent attempt with G portal to address it resulted in being told it’s a FC problem…

I am having the same issue with my GTX-hosted server. In fact, the engineer working my ticket pointed me to this thread and we’re keeping an eye on it to see if there’s any official response. He’s even set up a separate test server and it’s also showing an age of 0 despite being up for seven days now.

I have a slotted server from ServerBlend which is also stuck at 0 days after the latest wipe which was 2.5 months ago. I haven’t had any issues before that or maybe I haven’t noticed that it was stuck since I had it running for an year or so:

my server is from streamline servers, and from what i’m reading with everyone having it on different server clients and modded/unmodded i was right in thinking this is def a bug somewhere…

GTXGaming host here, same issue. I have been watching this thread and looking for info about this bug with no luck.

Had the bug unmodded and modded.

That is my concern, yeah. I figure players would be leery of joining a server that appears like it’s brand new even though it’s been up for months.

same problem! dilapidation of buildings and slaves does not work for me yet!

Game mode: Online private Type of issue: Bug Server type: PvE Region: EU Mods?: No Edition: Steam Bug Description: 1. The wipe on our server was 01.01.22, but the age of the server still shows 0, but it should be 70! 2. With such settings as in the screenshot, if the player was absent from the server, his building will break after 360 hours - but the buildings of the players are updated themselves during restarts, without the presence of the player, which is why the buildings of the pla…

sounds to me there are a few issues people have been having after the 2.8 patch and all could be related somehow… and it’s spread between dedicated and servers hosted from various sources as well as some issues that are showing up even on official servers. hope we can get some sort of answer on this…