1.0 is around the corner and the agressive walking animation needs to be changed ASAP

The combat update made the game SO much better.
The old combat animations were HIDEOUS. H-I-D-E-O-U-S!!!
Now if you guys could fix climbing or at least add a “grabbing ledge” animation so we don’t look silly floating on those platforms too high to jump but too low to climb… all would be perfect…
Oh? Whats this?
…
…
NOOOO PLEASE NOOOOO!!! GET RID OF IT!!!
I mean of course the walking animation used when you just attack. It’s hideous, and AT BEST looks like the character crapped himself or have a very bad case of hemorrhoids. 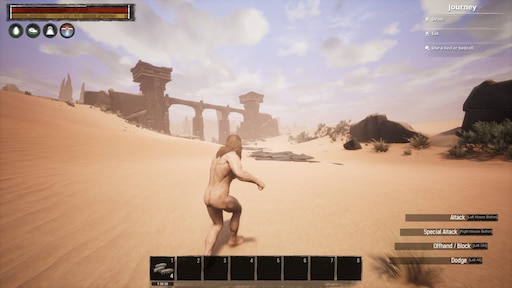 Edit: Just remove the spaces. The forum won’t let me upload the screenshot or link to it.

Did u asked if other people like them? you see the game is not made only for you people might start to change the animations once the game is out personally i find nothing wrong on any of the animations maybe the climbing to ledge one might be the only one again this is my thoughts…

Animations in conan are perfect comparred to other games in this genre.
They are actual motion captured animations, and not some random animator playing around in unreal.

They won’t change this at this point.

You know? This isn’t a cinematic game, it benefits from hand crafted animations. That being said… I absolutely think you are lying.
The animations of this game are unnatural and hell will freeze over before I believe they were motion captured.
Also, being better than other games of a genre PLAGED by mediocrity and ugly stuff is nothing to be proud of. The animations are still bad.
They got A LOT better after the combat update however, and that’s why this precise animation looks sooooo ugly. It makes a contrast with the rest of the animations.

Some things can be objectively bad.
Did you like the chopping animations from the beginning of early access? If you say yes… Let’s not talk anymore. You would be either lying, or a fanboy or a troll.

Edit: or have TERRIBLE taste.

Hey, please cool it on the name calling and aggressiveness, alright? Keep the discussions civil.

Since we’re so close to launch we won’t be able to redo the walk animations. If you hit X when you’re in combat stance you’ll return to the neutral stance again, returning you to “regular” walking

Fighting stance is fine IMO, but I would definitely like some form of vaulting or ledge grapple animation, not just because it would look good but also because a lot of the times I’m climbing and reach a ledge it doesn’t jump high enough for me to get on the platform and I fall back down the wall. That happens about 60% of the time unless I’m holding down space bar to jump again as soon as I catch the wall, but even then depending on the angle it might not work.

Increasing the boost height upon reaching a ledge would work too but it would look awkward.

I’d like to see an improvement in the climbing when reaching ledges. Right now I tend to “air climb” with the upper body for a bit, which looks silly. Even if a ledge grab was added, there would still be cases where rocks bend in angle, rather than end, so a bending climb animation would be nice and add polish to the overall process.

Yup…
And that’s bad.
Really… Poor guy. Just imagine the cramps T-T
However, he said they tweaked them.
Would like clarification if it was for “style” (ew) or to fix some motion capture glitch.

@Jens_Erik is a human representative of Funcom. He reads these words and either carries them back to other humans, or he holds onto them. That’s what makes him great at what he does. He feels for his Dev Team. There are humans who worked really hard to make all those animations, and for you to blithely dismiss a group of craftspeople that clearly is working magic here, well that’s a bit insulting. The art of this game has come an incredible distance simply in its suspension of disbelief, but on a visceral level you must admit the evolution thus far has been extreme and satisfying. To you it looks like cramps, to me it looks like seething with energy, and ready to crack some skulls.

There’s no need to fight over this, guys

We’ll definitely look into improving and tweaking animations (and lots of other things in the game) once we’re done with Early Access.

It’s always good to bring us feedback, even if it’s negative, as long as it’s constructive. If you have specific points I can bring back to the dev team, that’s great! For now what I’ve noted down is the following:

Okay, that’s feedback we can work with. If you have any other points I wouldn’t mind hearing them.

Though I always prefer a more refined character progression over some animations.
Like you said yourself… x and it’s okay.
I think it’s wrong to be totally focused on a single animation, if there is stuff which affects the fun of a game more than that.

This is why rather than getting a new infight-walking-animation, I would prefer the current perk system to envolve into some choice based one which then encourages quite a few of different playstyles. I think having perks is a good beginning and could lead to some awesome system, where players will have to choose how they want to fight.

Also I think the combat stance is generally fine, but as I didnt pay too much attention to that, I cant say if it needs changes on different weapons.
But when thinking of natural or unnatural stances… at least in martial arts (some?) people explain a good stance is archieved by “forming a half orb” with your lower body/with your legs (lower half being thought as being right below feet in ground, which is the counterpart to give balance), like guiding all the energy you receive into the ground. I guess it looks “weird” and “unnatural”, but it does have a point, as that results in a more steady stance which wont allow the toon to be knocked over that easily… And when I think about toons being set against elephants, rhinos and dragons…

And as I said above: I am way more worried about character progression. It could become so much more, to a point where a “meta” wont exist. (Or rather where a few best builds wont exist. As any statcombo could become viable.)

(Oh, I just saw one cant change to whom one replied to. Damn, I wanted to change it to a plain answer on topic. Sorry for spamming.)

Combat stance when walking is actually pretty close to how one would move while preparing to either strike or block an enemy.

If you have ever participated in a dual with rattan swords you will notice that the characters stance and walk while in combat is very close to reality, check out how combat in the more serious Kingdoms in the SCA (The Society for Creative Anachronism) is practiced.

I encourage you to try it out it is very fun and very authentic but be warned you can get injured and bruised, the Rattan Weapons are of the same weight of real medieval weapons and you can end up with broken bones.

Anyone who does not center their point of gravity by bending the knees slightly and also turning their side to face their opponent to make themselves a smaller target and to make it easier to block an attack and instead walk normal facing squarely at their opponent will surely be struck down easily.

If you have any other points I wouldn’t mind hearing them.

I think the animations look fine. I do have a few issues with performance…like when I reach a ledge and my character climbs horizontally along the ledge rather than standing up on it. (This is better than falling off though.)

I also find it awkward when the swimming at water surface becomes swimming in the air over the surface. This usually happens when I get close to shallow water or swim over rocks that are barely under the surface.

I am pleased to report that certain parts of my anatomy no longer hangs several inches more below the body than what appears natural when crouched.

My only gripe is with animations is that when you jog you cannot hold weapons like you do during sprint. If possible in future, can we have weapons in hands when we do normal running? That would be sweet.

As for “ready for combat” walking animation, perhaps add timer that if you are not in combat for 5 sec or so, your animation returns to relaxed? Combine that and my suggestion with weapons in hands during jog would be quite sexy to look at.

I think combat stance is two different states when you are in combat weapons drawn is were all combat animation and dodging and mechanics happen when u go normal stance it tells the game to end the combat so weapons draw its tied to the stance might be difficult to pull off and another thing would be if you have a weapon in hand you must be ready to do something with it hence the combat or ready stance when you don’t use a weapon chances are is sheathed or stowed away.