My GPU is between 95% and 100%, I do direct in Tiwch until today without problems, the rest of the games do not give me problems, the Conan is put with the GPU at maximum and it crashes, it does not allow me to do direct by Tiwch.
I have tested from a private server and from 2 official servers and the result is the same, the GPU at maximum. Checked the pc with antivirus and there is no program that consumes GPU resources apart from the game and Twich Studio.
Servers tested: 1035 and 1024 Europe. 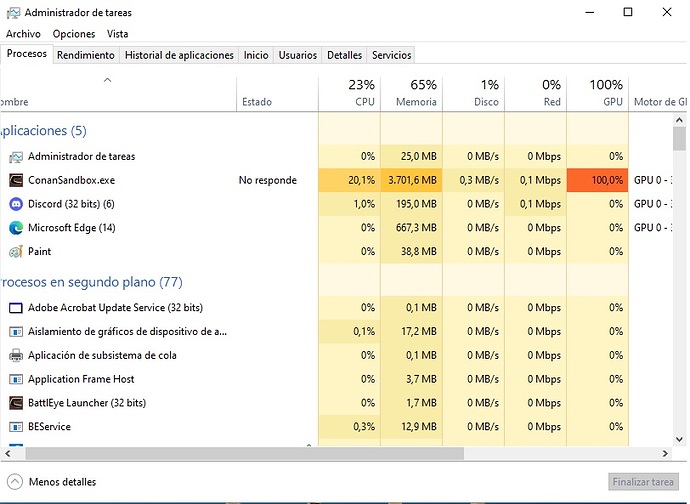 I’d check to see if your RAM is showing 16 GB before logging in. My game crashes when one of my sticks of memory just goes missing during gaming session.

Might be time to re-paste the card… how old is it? The TIM these companies use is pretty much engineered to fail after about 2 or 3 years - and sometimes sooner. It’s a simple operation. Order new thermal pads for the make and model you have and grab some Thermal Grizzly or like, from the shop, man your screwdriver and in about 30min you’re back up and ready for another 2 or 3 years.

Most video cards will run at 100% all the time; you dont want it taking a break because thats just less frames when its capable of more. Video cards manage themselves rather well and I’d be more concerned if its NOT at 100%. My 3090 pegs itself at 100% and I’m glad it does. I dont want it slacking off.

Mostly true… often dependent on the CPU… But if it’s also crashing it might be peaking up over the TDP throttle point. That can happed when the paste or the thermal pads dry out. And may only happen in games and apps where the CPU/GPU balance is such that it allows for that condition.

Another possibility is the PSU. The ability of a PSU to supply steady power at it’s rated output diminishes over time. This usually results in a system that just suddenly powers off though and not in crashes.

Of course there could be 20 other explanations… but we gave @DesperadoFfA enough I think they will find a solution along the way.