Yes I know all about fish traps, efficiency for sure but for the good vibes and relaxation techniques I want to fish in game, also to this note add a Banana Hammock, Bikinis and actual hammocks as I love them. Please and thank you. Fun times ahead hopefully.

I support the Idea of better fishing.

Fishing is terrible in it’s current state, so bad in fact I don’t even bother.
It was at least tolerable before the need for bait and instant spoilage was added, now it’s just not worth the effort.

Especially because it was closer to real life fish traps before,

Even so, fishing with a pole is a much better method, and would add to the game.

Spoilage would no longer be an issue as only one fish would be caught at a time.

I want fishing but not with fishing rod, not that I would had a problem with it, but I want spear fishing more. The sunken city and Siptah is full of special fishes in the waters. I would love to be able to use a riptide for spear fishing, I wouldn’t ever use fish traps again. One of the things I loved the most in stranded deep was this, to go underwater and do my daily fishing.

I would like fishing to be just about food and oil be done using something different (ignoring the alchemist option). Like, traps poles and nets for food that work similar to the old way but maybe tick less and since you dont need a ton for oil, people dont have to spam them. Like, put whales or something in the deeper areas that can be killed and harvested for blubber and then make oil.

You don’t need a ton of oil, but you still need quite the load of the stuff.
High end armors need a lot of hardened leather which in turn needs oil. I wouldn’t say you need a ton, but you still need plenty of it…
But not using an alchemist to make it is really lame.
And let’s not forget that oil is a very good fuel.

I use almost everything not to have chests full of things I ain’t gonna use. Let’s say I killed some bearers in the way and I gain 1.500 sticks, what should I do with them, they are fuel, simple as that, I gained 1.000 bery seeds I put them in the fluid press to gain some oil. I am not fishing for oil, this is long gone, my oil farming depends on alchemists, which I can gain really easy and fast. I want fishing for buff fishes and fun. Since I know where to go and dive to fish them I would love to be able to do so

. Another good that dive fishing would bring is the use of breathing potions, now I just not loot them anymore and ofcurce would made the riptide “must”, having unlimited breath underwater. Trust me, it would be awesome to be able to be fishing this way, you would love it

My sticks are now shaped wood supplements. Used to just litter the EL with them.

Just put a compost in a compost box and let the grubs build up and then just use the fish when you need them and put excess in the compost box for easy spoiled meat unless you harvest a special type of enemy for 1000 rotten flesh every time lol.

Thank you, but I am aware of that method
It is still too convoluted for miner buffs.

As it was pre-nerf you produced oil and food for thralls and pets and many other benefits, as well as the nearly useless buffs.

Now a tier 4 alchemist is very easy to get to produce oil much more efficiently and thralls and pets can be easily be fed just by carrying a skinning knife or cleaver.

Basically, yes. I just use fish traps for RP purposes, as decoration. They look nice when you build near water. Other than that, meh… they don’t do much.

Red Dead Online isn’t bad ether, I hate forced RolePlay element of watching you pull rod in and out, put each bait on…everytime.
Its great concept, with realism. (just rip up RP animations, put them in trash can)

Spear fishing is fine if you can you know… see the fish. Why not have net fishing. Cast out a net and pull it and see what you pull up. Who knows, maybe you’ll get a nice shiny new pair of boots.

That would be really cool!

Not a fan of removing content so just have ALL types of fishing.

The problem I have with the alchemist version is one of style. Oil is a resource and its odd that it is crafted instead of harvested. You can do the fishing way sure, but it sucks. Oil should be like getting ichor, wood, coal, stone, etc because its a base level resource upon which other things depend for crafting in quantity. Its just odd that in a world where people light lamps and rub it all over their glorious bodies that an alchemist crafting it from bark and ichor is the best way to achieve it… very strange.

Oil should come from the press, for cooking as in olives.
From rendered fat like from Mammoths, or whales.
Or from the ground like a side drop from mining coal or even a node/pool of oil itself.

But I was referring to efficiency in game, and Alchemist’s are the highest yield per effort expended.

Yeah they are. Which is so vexing…

Fishing is done with bombs: 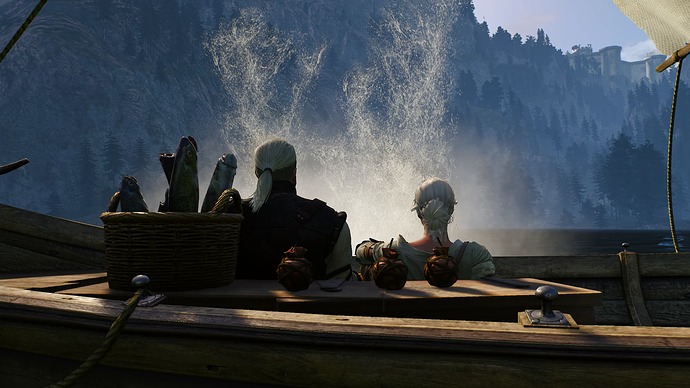 @prologue1337
Yes and no. No matter how funny it would be and how effective is in real life too, no. We will be attacked from people that see things in gaming as reality. I still can’t forget the slavery post

, I do feel compassion for these persons, but I would prefer not listen again this kind of complains. But it would be cool if we could fish this way too, yes I agree