The main issue in fact isn’t Sunder itself, but rather the amounts of armor various creatures have. The gap is just too ridiculous.

Does it start with this armor amount when you place it as pet? I need to test…

Look at what armor pen can do to it…

You forgot to put oil of agony on it.

I actually think it’s more useful in PvE than PvP

Yep true, I always use the 1h Axe of the outer dark for PvE on Siptah.

It’s the second one, Arp reduces the reduction itself by simply subtracting from the damage reduction percentage

Ahaaa! So it is still the same. Because I heard the formular changed.

Make stagger better instead. Cripple is already buffed with new perksystem. And remove perks that allows you to not get staggered :))) or take no damage :))

Does it start with this armor amount when you place it as pet? I need to test…

Yea, if I remember correctly then pets indeed take that value as their starting armor

(I have an unfinished cat companion mod where I tried this

Ahaaa! So it is still the same. Because I heard the formular changed.

The part that changed though is the formula of how much protection armor gives you, not the reduction of sunder or the way armor penetration works, just the constant in the formula from 250 to 500.
It does have quite a significant effect though, if you look… Blue is the old damage reduction curve from armor, orange is the new one: 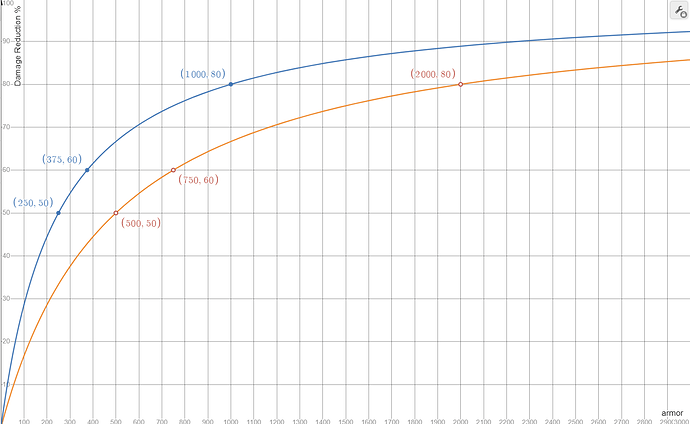 Haha yeah in that case its useful but the majority of creatures doesn’t have this many armour
What if you just stack damage? How much of a difference does that make?

Btw the mod showing the numbers can’t be 100% trusted, or has it been fixed in this test?

They had to change the formula. Because armor values inflated upwards (bulked plating and introduction of silent legion light/medium + dragonhide + dragon medium). It is so much better now, light armor does not have 60-70% damage reduction anymore.

Thing is people still gonna use the other one since it makes you able to get away easier. And removes the whole point of stagger perk

What if you just stack damage? How much of a difference does that make?

Well, for these type of high armored creatures it makes very very little difference without armor penetration. They just have crazy amounts of armor, Imo Funcom should go through monster armor and adjust them to where they’re more meaningful, like having more enemies in that middle-zone where Sunder is effective and not just this “all or nothing” that we have now.

Btw the mod showing the numbers can’t be 100% trusted, or has it been fixed in this test?

If you mean the damage numbers visible on Hosav’s UI in that specific Rockslide fight, I think the values for damage are correct there, though it would not matter much since you obviously saw that it died very fast.
However it’s actually true that certain things might not be 100% accurate atm when it comes to damage meters (so far what I found affects concussive damage).
The reason for it is that some of the new perks / attributes might only be applied after the only “clean” source of damage numbers we can intercept with mods. Ofc you can always go in and jerry-rig things directly in the combat blueprint, but most modders avoid that like wildfire and for good reason so I doubt Hosav did that

It is so much better now, light armor does not have 60-70% damage reduction anymore.

Yes! that was a bit silly imo, it was way too easy to reach those levels of protection

I see, saw some errors before when someone tested it, so that why I asked

So… Sunder is a bit of a… “meh” atm. It’s useful on the very few targets that have mediocre armor amounts.

Well unlike others i like my game harder not easier. And since the devs dont want to increase the difficulty- i handicap myself. Makes it more interesting to me.