Hello. I wanted to suggest a few things that I think would fit nicely into the game. First, personally I think that waters are too safe in this game. I mean its very strange when you can escape from a crocodile just by going into the water-this is too unrealistic even for a fantasy game

Next, I think some dangerous water creatures could be added into the game-like pirahnas in the junge biome, sharks and moray eels at the sea and maybe some sort of sea or river monsters, like sea serpents or something similar to plessiosaurus or mossasaurus? And, with waters dangerous, we could get a new aspect of the game-boats. But i think boats could be alerady suggested by the players, so there’s no need to write more about what it could do. What do you guys think?

If I had an euro for each time this or similar was asked already…
I totally support it!

+10000 for water creatures (unique) like WoW.
Yep we got some threads about boats (even working ones) in mods (tests).
But there is the issue…
Exiles lands (still the main map of the game) are designed without thinking about actual water routes across the landmass.
There is only 1 route you can use boat correctly - from the Dregs to the jungle + sea coastline.
Since the jungle are not so popular (pls turn off 24\7 rain!) and content plenty (after completing dungeons + journey steps literally nothing to do there) i dont think this is rational to invent entire new mechanics for such limited area.
Other rivers are too shallow and blocked by waterfalls and some elevated landscape, so there is no way to make them traversable (even if devs are gonna raise water lvl there).
I checked each river turn by my own…

But…
If in some future we gonna get new biome (N-E part of the map yes yes dungeons there…)
And the only way to get there will be by seashore (from the jungle below) - boats will BE CRUCIAL.

Yes please, whatwith the Survival stat gone and how some gear pieces work now i oddly never seem to have issues when dipping into rivers anymore. Even in the north. Kind of odd to see a apparition swim up Riversend and freeze/drown when it doesn’t even put me in the Cold temperature range with basic 1 bar insulation armor.

Though it does drive home the point that they’re visions of past occurences.

One serious problem is the bridges people have built across the river on most of the server’s Official are cluttered with them its going to require no building areas that people will not stand for having their bases removed.

As you can see on map:
Blue zone -100% boatable
Yellow zone - shallow waters (theoretically can be traversable if you raise a water lvl a bit, but no too much to interfere with current ingame content (caves for ex) and possible player bases (well some water aint gonna destroy them anyways) )
Red arch - blocked passway (waterfalls, elevated landmass).
Isolated water body like ponds, puddles, lakes, reservoirs are not actual transport arteries so they are not painted. 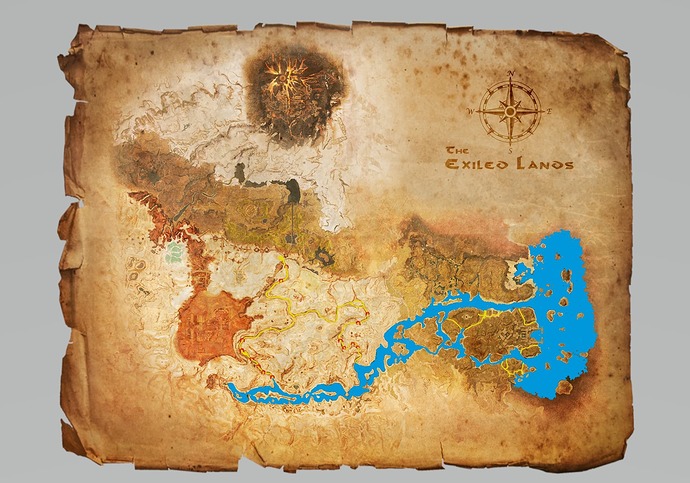 Ok, so those who say that there wouldn’t be much use from the boats are probably right, i didn’t realize that’s there’s almost no waterways in the game. But still, i think that some water creatures would be nice adddition

Of corse there’s use for boats! You can navigate the entire noob river and a lot of the jungle. It would be very cool. Useful? No. But definitely very cool.
Danger in the water should be a must, @bigsolder . Fully agree.

We can vote for that… need some unique underwater creatures and loot, so diving and boats will get their purpose. And once again, maybe new biome will make water route from Skulker’s End to Buccaneer Bay crucial. 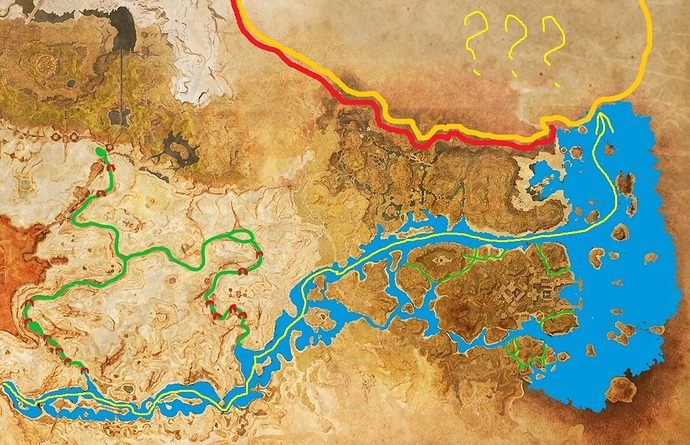 Not unless you have a boat that can pass through thousands of foundations crossing the rivers currently that on foot requires going up to hills or jungle I talking solid foundations you can’t get under. @Denversetti