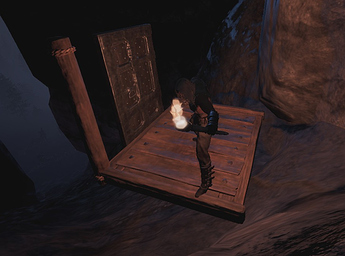 When an archer thrall is targeting an entity that is out of reach for some reason, it may happen that parts of the associated building or the entire structure start to be invisible. I think that it only occurs when the viewer is returning into rendering distance. The whole structure will immediately be visible again if the target or the archer is killed.

It happens in different areas. The target can be wildlife, boss creatures or a player. The building mesh seems to be in position, but appears to be a bit laggy. I have not spotted this phenomenon during raid times yet.

There was a bug where single building pieces were consistantly invisible but without mesh, but this one is different. It is also not the same problem like the delayed display while approaching a building.

I found two threads that are probably pointing out the same bug:

“cannot see anything other than 1 archer that was on roof shooting everything else was invisible.”

I teleported to Mounds picked up couple thralls then teleported back to shattered springs oblisk ran to my base at sepemeru and everything was invisible was colliding with wall spikes and getting damage but cannot see anything other than 1 archer that was on roof shooting everything else was invisible.

"I shot the croc, the pets “woke up” and started attacking the croc.
And THEN the base loaded completely."

Hello @Kruttmusa, thank you for taking the time to share a video of the issue. Does it only occur during the initial loading of the area? Is the console connected to the router through wired or wireless? Which XBox model do you have? Is the external drive an SSD or HDD?

Indeed, this might sound as one part of the dreaded invisible building/server desync issue.
We’ll send this information to our team to see if it helps tracking down the root of the issue.
Thanks for your feedback.