Conan Exiles low use of the GPU and CPU

I have been looking around for a while for information about this specific subject. But obviously without much success.

Main question is really, why does Conan Exiles use only an average of 40-50% of the GPU and similar of the CPU?

This draw is resulting in 30-40fps inside a decently build base on a PVE Private server. Nothing insane like you see on official servers from streamers etc.

Never is either the GPU or CPU maxed out to bottleneck one or the other.

Ran tests in other games like Breakpoint, Control ro Alien Isolation and they all draw the max possible from the chips.

So ya, i understand the low fps can be caused by shadows, amount of things placed etc etc. But thats only 1 part of the puzzle. If the GPU / CPU run utilize more fhten 30-40% the fps goes up naturally.

So why does this happen? Is it coded to be limited to handle crossplay with lower tier consoles? Or is there something else going on?

Thats a fair statement Multigun, i have seen these aswell. Thats why i came here for answers. And to be clear, i am not talking about the framerate. I dont really care that it is that or higher or lower.

What i am puzzled by is why the gpu and cpu are only used for 30-40% on average. Yes there are spikes where it is going up to 60% for the cpu. But if i have to compare this to a few other games, Control, Breakpoint or Alien isolation. Then the GPU actually hits up to 95%.

Multigun, I have a query for you I can’t seem to find an answer anywhere - need some help:
The post I made elsewhere:

Folks, I have a question and in need of help. I don’t know if this is from this update or not, however, i have noticed, that the detail quality of buildings and placeables changes and turns into lower quality one as i walk away from it a certain distance, then when i walk back towards it - level of detail improves to where it looks good again. Now, I understand that is normal, but, it is happening way too close to my character to a point where its visually unpleasant to see interior and exterior objects go low quality 10 feet away from the character spoiling the whole graphical appeal of the game - What setting and wich .INI file can I tweak to increase that distance of higher level of detail render? The settings in graphics don’t change a thing in that regard. Thanks in advance for any advice on this.
Best regards!

That’s the behaviour you want to get. The game is GPU bound.

What i am puzzled by is why the gpu and cpu are only used for 30-40% on average.

I have the same. The game could utilize the hardware more but for some Funcom reason it does not want to…

I don’t think the issue is with Funcom though. I will retest when I get home later today but last I checked my GPU was used on 82%. I will come back later with a screenshot of the usage.

Before the 2.6 update the animation was smooth and now it’s often jerking and freezing. The hardware is absolutely the same as it was before

. So I doubt that CPU/GPU usage is a bottleneck. Code optimization (or to be more precise, the absence of it) and server connection play the main role (IMHO).
Provided that the hardware meets the requirements, of course. Or exceeds. With 8GB RAM (recommended) the overall game performance (with no other Windows tasks) was much worse than with 16GB, though the actual usage was up to 4-4.2GB, not more.
…and UE4 itself is a great mystery…

And what did your tests reveal ? 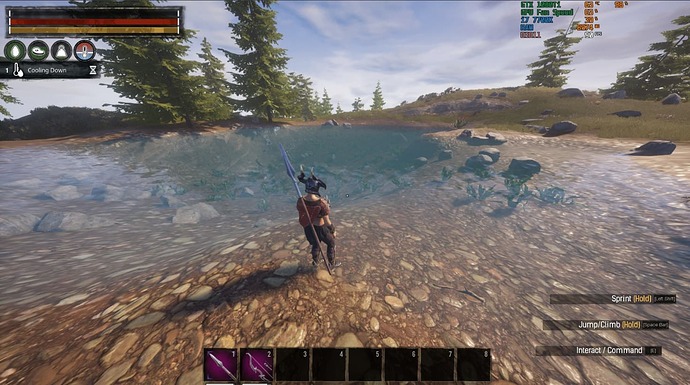 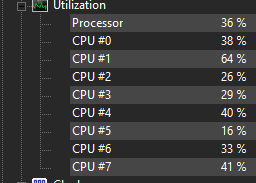 P.S. There was a base in rendering distance but not a lot of AI + I was mostly standing still.

Okay, good and what where your video settings?