Did I read the news correctly? A simgle player campaign wll be released nex year where you play as Conan himself??!!

I saw similar news. However, the news implied it was a seperate game, not something connected to Conan Exiles. Unfortunately the details were very sparse. We will have to keep an eye out and see what happens.

During our financial report stream we touched a bit on it. You can get more information here

I’ve timestamped it so it begins when they start talking about future games.

I am curious how Long the Conan liscence (?) contract with funcom lasts, but be sure more Conan based games will come, otherwise funcom would waste the license. I just hope they take CE as a what-can-be future games, take all experience in survival and sandbox aspects of it, and develop a yet better game in the future. The Conan license potential is just… huge, though it may be a bit too much for a small company as Funcom, lets hope CE revenues get well invested (more personel please) and not only in stockholders pockets.

Well get ready to take my money, cause i thought conan exiles was great and i love Conan in general. I would say just make sure there is a sprint attack in the game, and a jump attack. Those are a couple of basic must haves in action adventure games lol

Funcom#In the pipeline on the Official Conan Exiles Wiki as of November 7.

But I don’t wanna play as Conan…

I think there’s a problem somewhere in the single player aspect of conan exiles! I think if you build to much or have over 10 thralls I don’t think the game engine can handle it! I say this because I am experiencing hard crashes! Yes granted if played on a server this might not even be an issue but on offline sp I think it is! Can one of the devs please look into this? I hope there’s another reason for the game to be crashing. Maybe a build limit and a thrall limit need to be implemented for the offline sp portion! I hope not but something is making this amazing game crash constantly in single player offline on Xbox one.

Same for me, while i can imagine some players would enjoy play as Conan, it’s not really my case.

I like making my own characters, it’s part of the fun for me, and love when the character-creation is good, and allows lot of details. Not really fan of imposed chars mostly anyway.
Maybe i’m to used to the freedom of open-world, and especially sandbox-games.

But of course i would enjoy more story/lore for the singleplayer-game. There lot mysterious places, and features making think at some hidden mysteries, implementing more lore would really be pleasant.

I went through 5 hard crashes today! I put up with it because this game is awesome, the character models are amazing! I can go on and on and give this game praise till I’m blue in the face but it’ll freeze then hardcrash! At first it’s nothing but after you build a fortress \ castle\ pyramid the size of a Mountain and add a army of thralls (you know role play) the game start acting up! I think the engine can’t handle it on offline single player! I pray that there’s another cause for the crashing because building up a small army is awesome.

you give few details about your machine/pc, so hard to say.

Also maybe some pics from base could help. This said, it’s a fact that there is a limite to what you can and should built on one place. The bigger the base, the more foundations, structures, and of course thralls you put in a area, the more lag you may experience.
This may change depending your hardware, but the game-engine itself has some limitations to.

Problem is not so much how much structures in the whole game, but on a given place. The smaller the area, and more items/structures, decor-items and so you put together, the more problems you may experience.

Sure building bases is great. Having thralls and and now pets is to, but it has a price.
I like build a lot, and do it often in singleplayer, but also on my server, but especially on my server i care lot about performance to.
Decor-items are lovely, but they add lot more to load in a small area.

I had more thralls in the past, especially in EA, but now i raise bit difficulty, what make it harder to get them, then put more care in stuffing them well, this does the trick mostly.

Maybe i’m also very lucky, i experienced maybe 2 hardcrashes since EA, and i have over 1500h gameplay.

I play lot in singleplayer, and built lot and big bases, with up to 30-40 mostly and more in each. The outposts bit less. And i had very few crash to desktop in this game, and i play since EA.

Maybe it’s your pc, did you check the gamefiles, if all your drivers are up-to-date. And of course mods. While i’m a big mod-lover, i’m also aware that there can be comflicts. So up-to-date mods are a must, loadorder is also very important for a smooth game without problems.

But believe me, my singleplayer is more stable and solide than many online server ! And i run mostly very heavy modlist, especially in singleplayer where i go up over 20 mods often.

To show, i loaded here my server DB to my singleplayer, and on this picture you see one of my southern base. 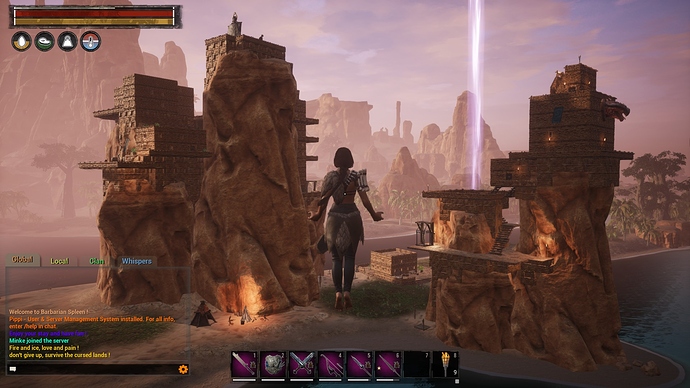 Thank you so much Vattende, unfortunately I’m playing this great game on Xbox one (base system) and yes! It’s kind of in one place, not necessarily close together but in the same area, I had a feeling that was the problem but I was hoping not😢. I do play single player but not on a private server I play offline, and it’s great that funcom added offline play. I may have to start a new game and try not to build so much (it’s gonna be difficult) and yes! I like to build a LOT! My good friend I built a pyramid the size of a mountain I have five elevators in it! a throne room, 5 shrines, and about 25 thralls give or take one or two😊

That’s awesome but my base is 8 times the size of that and I play on console. I don’t know how to post a pic up here! I took 79 screen shots! On Xbox one dashboard

I may have to get a pc but at the moment money is tight. I would get an Xbox one X but I don’t know… But believe me my game crash like you wouldn’t believe!.

I have to get a pc! I’m starting to realize that consoles kind of suck. Do you know how I can post a base pic up here? So I can show you my mountain size base, from console of course

Maybe in some years, game-engin will be able to handle bigger buildings, more more more.

But yes, at the moment, we have some restriction. I know the feeling, here an add, and here a little village. But all this has a price.

Don’t know console-play, but seems just worse than pc. I’m a pc-geek, and love the freedom my machine gives me, so no clue what could help you more on console.

Like said, i don’t play on console, so no real clue how they share and store the screenshots and captures you may take. But try see where your picture-folder is located.

For my part on pc it’s easy, and i make lot pics, so i have simply made a shortcut on my desk, so it make it easy and quick to share pictures.

But select add picture in the text-editor here, then chose the pic you want inside your folder (one time you tracked where it is), and go, upload.
I know you need be member for a while to post pictures to, how long can’t say, but should be ok for you i hope.