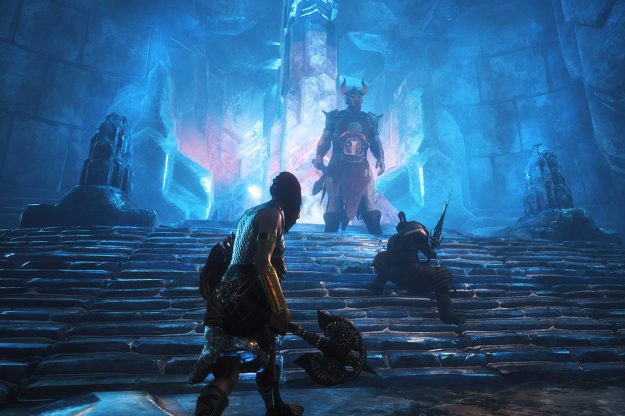 Funcom have recently published their financial report for Q3 2018 and one of the more interesting things were their plans to release a single player campaign for Conan Exiles. It is only in pre-production so there is no exact release date.

Can I now equip my Shemite Carpenter with a steel hatchet?

semi excited… maybe? depends what they do… How I picture it, and what they do likely vary. XD

I checked into this. It is discussed in the Funcom Quarterly Financial stream.

@Spynosaur_Nicole was kind enough to time stamp this for us. https://youtu.be/H_ZYj42yLFk?t=984

It is a Single Player game where we can play as Conan and this is really all that they said.

You should ref this instead:

It will be updated when something new is known.

So the Petroglyph Conan Exiles “game” due to release Q2 2019 only on PC – is that a separate game that stands apart from any previous Conan Exile progress/world development or is that a DLC incorporated into what we have now?

@Alex02 and anyone other talented modders: http://www.gamasutra.com/view/news/331419/Get_a_job_Petroglyph_Games_is_hiring_a_Senior_Technical_Artist.php

They shoul integrate it for Conan Exiles… many people would pay top dollar for a SP campaign DLC inside the game, plus they don’t have to do a new engine. But well, I guess a new game is also exiting

Thanks for the info! At least is the same team that made Conan Exiles so I supouse that the engine would be similar?

I’m excited about this since I’m always in single player. WOOT!

Hmmm…I really like the approach that Conan Exiles took with making a survival game with rpg elements attached. I wander what this game will be. I think Funcom makes good games so I will be keeping my eyes on this. Could we see a Rpg style game like Assassins creed Odyssey but in the Conan universe…oh wow

If Funcom delivers a Witcher-like Action/adventure RPG, I will be a fan of the commpany forever. Even if they never fixed the game breaking bugs of Conan Exiles, did anything about cheaters and erased the official server I was playing in without warning making me and my friends lost a livetime of construction and leveling up.

Make it right Funcom! No one want an strateguy conan game or another lazy Multiplayer. Single player is the way.

Say for yourself, I would play just to see the story, but an online game is what keep me playing, I hope Conan Exiles still lives for long years.

If I want to play Witcher I play Witcher. This and Skyrim are the best SP games I have ever played. I like the Conan setting, Conan Exiles is a really cool sandbox multiplayer game. The setting is unique and this game has so much potential. But to raise this potential they have to finish the development of the basegame (addition of the missing systems/bugfixing/performance update/AI improvements) and they have to add more content, especially for the endgame. This will cost more manpower, more money, more development time and the absolut will of Funcom to do so. Do they have this will?

I would like to know more about Conan’s presence in the Exiled Lands. Why is Conan here? Did he come of his own free will and search for something? Or did he get a bracelet and got to remove it? Maybe we will get those answers in this game.

Why is Conan here?

To justify the title of the game, of course! Ah, just joking obviously.

I know this is weird as hell, but I only play games with a female protagonist. I just enjoy eye candy in my games. It’s why I play CE. Boob physics!

If it’s a game that features Conan as the only playable hero, then what’s the difference between that game and all other games out there? I might as well just play Witcher or Just Cause 4 or whatever. p.s. shame Darksiders 3 sucks apparantly D:

Oh I have no problem with Exile. Even with the inherent artistic mediocrity and lazyness tide to the online games, Exiles is great. I also hope it last for years.