"Death of a game: The Secret World" by nerdSlayer

The “Death of a game”-Series by nerdSlayer is really worth watching! In that series of Videos nerdSlayer investigates the reasons why certain games failed and it is always interesting to watch. He already made a lot of videos about some well known games and every episode is worth watching. How he describes the series himself:

“Death of a Game is a series dedicated to uncovering the mysteries surrounding the death of a game or company. nerdSlayer defines the term “death” in the context of the show as either… 1. Literally dead. 2. Had a mass exodus of players and never recovered (expectations etc). 3. The company ceased to exist. We follow a timeline of events, to uncover clues concerning why a game or company doesn’t do well, and attempt to put it all together at the end for a deduction explaining how or why the game failed based on the evidence gathered.”

Grab some popcorn and enjoy!

Rare to hear someoone give Secret world a fair judgement.
Shame we probably never will see a new engine…that would be fun.

Yeah, nerdSlayer always makes fair judgements. He doesn´t like to rant, he likes to analyze.

I agree with Leogrim, it’s rare to see a fair judgement about Secret World.
It was a pleasant surprise and a very good video, instantly subbed to the guy.
The only tiny bit which I didn’t like was the steam charts. It has never been a secret that the player base is/was small but the standalone client was very popular. Back in TSW I didn’t meet anyone who actually played through steam (myself included) and even here in SWL I started out with the FC’s client.
It was just recently I linked it to steam only for the steam charts.

I agree, great video. I wish it were wrong, but not really much to fault it on.

The only tiny bit which I didn’t like was the steam charts.

I think that he was using the steam charts to demonstrate the trends. I agree that they don’t represent the whole population as the FC client was popular, but those numbers aren’t available anywhere publicly.

There were a couple decent polls conducted in these forums as well as on Reddit about a year ago that showed ~ a 50% split between standalone and steam client. This may have changed over the past year but one can still take trends from the steam charts whether it represents the entire playerbase or not. And it is reasonably safe to say the same trends can be mirrored in the standalone client unless standalone client players are some significantly different type of players all together.

It took me a little while to put my finger on what bothers me about this video. The NerdSlayer makes a lot of good points, but ultimately this is clearly the perspective of an outsider, using numbers and other available “facts” to make his case. As someone who has been actively playing, I don’t think TSW was as doomed from the start as this video makes it out to be.

To be honest i totally agree with him, even if he didn´t play the game.

The thing is that TSW was/is a pure “Themepark”-MMORPG. These games only survive with a steady flow of content because there are almost no Sandbox-Elements and you need a big team and lots of money behind that kind of Story-focussed games for them to have a future, because nearly EVERYTHING you can do in the game as a player has to to be created by the developers!
Story, Quests, Dungeons, PVP, Scenarios, Endgame etc. … you name it.

Funcom is not Blizzard, Bioware or whoever. EA also was only the publisher.
So looking backwards I have to agree that nerdslayer is right.
(And yes … i didn´t realized that when i was playing the game myself in the past)

So yes, it was indeed doomed.

I think it’s difficult to make an unbiased review if your perspective is not that of an outsider really.

I think that the troubles Funcom were in financially after the start of TSW made the concept of regular content releases far harder than they would have been. Coupled with lower than expected sales of the game that compounded the problem, and a mixed bunch of reviews meant that it was unlikely to really take off - which is probably why they risked rebooting to SWL.

One problem is that he looks at TSW almost as if it were in a vacuum when in reality, looking at the bigger picture, many of the game’s problems weren’t of its own making. The video completely glosses over the years that TSW ran, if not thriving, but at least moderately successfully as a niche game. But any money made went into failed project after failed project. TSW was run into the ground until Funcom finally struck gold with Conan Exiles.

In all honesty it is surprising that SWL/TSW had even moderate success.
-No giant develoer or funding behind it
-Aging engine, with a lot of stitchwork
-Niche Theme
-Themepark MMO

It just looks like a recipe for disaster but somehow it worked and I am happy that funcom sticked with it. Not always in the capacity we would have liked or in the direction one wishes for…but it still gets something in form of small updates that I for the most part enjoy.
I think the video talks a little about how refreshing it is in the end to see a leap of faith that is SW.

@AWOL and @Drenneth, I should have elaborated. I fully agree that the steam charts show trends and is very useful when glancing on the amount of players, no questions about that. The little minor (and I mean minor) thing I didn’t like was he forgot/didn’t know about the standalone client. Maybe he said it and I missed it, my bad if he did! I have seen steam charts being used to determine how dead the game is so many times by people not knowing about the other client and it is a little tiresome. Overall a very good review imo.

I think he did mention it, though I’m not positive

which is probably why they risked rebooting to SWL.

And yet, despite a full-on reboot they once again decided not to give it the support it needed. That support went to Conan Exiles.

SWL had a relatively good first year because Funcom was sitting on a pile of ready-made content from TSW, giving new players a steady stream of high-quality content. After that supply had mostly dried up, the reality of a high-maintenance MMO being run by a resource-starved team set in.

And yet, despite a full-on reboot they once again decided not to give it the support it needed. That support went to Conan Exiles.

Yup. I can understand that for Funcom it was pretty vital to have a hit with Exiles, but I definitely think they dropped the ball on getting SWL rolling past the remains of TSW.

Good video,
I have nothing to add
except
HELLO!? 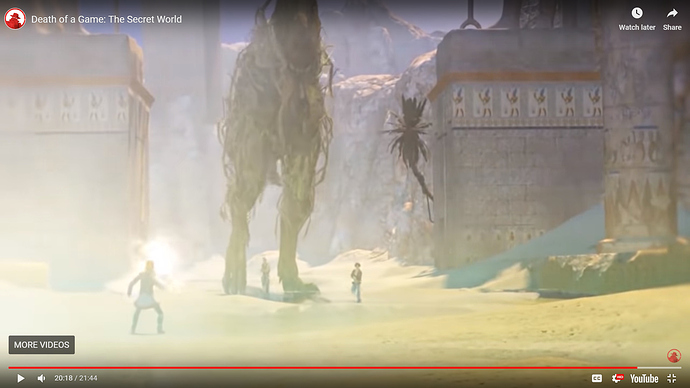 I had the same reaction, haven’t seen that clip before. I’m guessing that’s the skeleton in CotSG? Before it became a skeleton… Not sure though, don’t remember the exact form the skeleton and once there was a rumor (I think) about something flying creature or a enormous fish.

There was a filthy T-Rex model in the game since launch for future content, the devs would bust it out for events sometimes.

That video is dire by the way. Twenty minutes of no new insights delivered in a tedious monotone.