I’m confused. What is coming now? Mysteries of Acheron or Debaucheries of Derketo?! 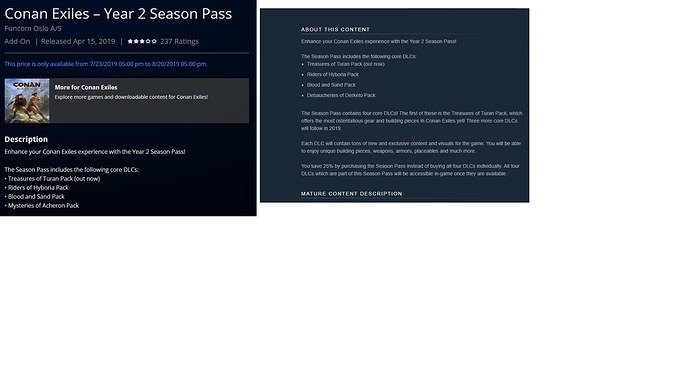 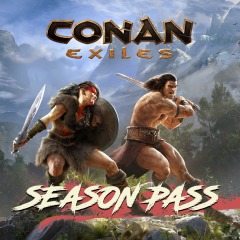 Enhance your Conan Exiles experience with the Year 2 Season Pass! The Season Pass includes the following core DLCs: • Treasures of Turan Pack (out now) • Riders of Hyboria Pack • Blood and Sand Pack • Mysteries of Acheron Pack Each DLC will...

Thanks for pointing this out. We will update our documentation on the wiki to reflect this.
I can’t find the exact change to the store page which caused this, but the title was likely changed on purpose and this should make sense once it is released. Changing a product’s name is not an uncommon practice. That it is changed on Steam first is also logical.

I would agree that it is confusing. I’m not a hardcore Conan fan, so I don’t see an immediate connection between Acheron and Derketo from looking it up. It might be that they came up with a better match with the bundle and moved the Acheron pack to Year 3, but I’m not sure of it.

tldr; Debaucheries of Derketo is the new name for or theme of the 4th DLC.

@AndyB I’m not sure why I got a notification for this post - even though I’m glad I got one.

Also noticed it says DLC for 2019 4. So now is it a fiscal, calendar, or release date year.
Fiscal–doubt that, as we the consumer don’t really keep up with Funcoms business cycle
Calendar–if so, then only 4 months to get in 3 DLCs
Release–makes more sense,because there is 9 months until may 6th 2020.

I like the change. Mysteries of Acheron always sounded pretty “meh” to me. Not that we have much to go on since all we know about it is the title, but still. Debaucheries of Derketo sounds much more interesting.

Awww after working with Acheronian stuff for the past month on a new mod I’m working on, that makes me sad. Oh well, all the more reason to keep on modding I guess!

We’ve renamed one of the upcoming DLCs to better reflect its content and avoid possible confusion. We’ll share more info about its content in the upcoming months.
Also, all this content is coming during this year. Fasten your belts as we’re in for a wild ride

4 Likes
DLC update today?
Why did Mysteries of Acheron turn into Debaucheries of Derketo?
Kapoteeni August 8, 2019, 8:44am #7

The rather unique duality of death and fertility does have lots of potential. Maybe Funcom decided that they wanted to tie Acheron to a type of content that wouldn’t fit into a cosmetic DLC.

We can’t say much about this new DLC, other than it’s going to be… interesting.

The rather unique duality of death and fertility does have lots of potential.

It’s going to be new types of compost, right? It’s the only thing I can come up with that combines both aspects of Derketo.

Well, one of the DLCs is called “Riders of Hyboria”…

yea @Antzzo. it will include pictures of mounts to hang on your walls

To clarify the above absurdity

be sure to read about mounts here:
https://conanexiles.gamepedia.com/Upcoming_features#Cancelled_features

I should note that I have liked your post for reasons which are not animal cruelty.

things could always change. From “no were not doing mounts” till “we cant comment on any possible new feature” when mounts is asked about in 3 occassions in different streams.

My kingdom for a horse!

I have eight fully-equipped bases with solid anti-Purge defenses, and one of them includes a throne, so it counts as a kingdom, right?

Or, because my player character is basically a teenage girl, I’d be satisfied if I got a pony.

Oh, wait. Now I know what it’s about. It’s a new reskin for Wheels of pain: 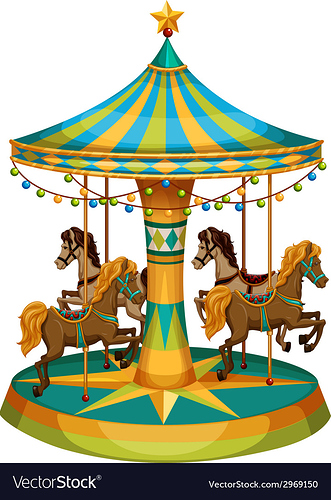 Breaking your thralls with kindless, aka. the Wheeee of pain.

Nice, but the risk of being unpopular, I prefer this version myself.

I laughed pretty hard when I read the first comment. But as I have said many a time before, I am kind of warped.

So, does that mean the rest of the season 2 DLCs will come out in 2019? Or does the year start when the 1st DLC for season 2 was released in April?