Disappearing bodies is REALLY getting annoying

As in the title, I’m getting frustrated.

Today I went farming for Bandit Leaders in Sepermeru and as I was killing the T2/3s, my thrall knocked out the BL. He was nowhere to be found and I scoured the area for a preview of an underground NPC after eliminating all the bodies. I left line of sight, then left the area, returning to no body.

‘Sort of’ giving up, I returned to my base, offloaded the loot, topped off health, etc, and returned.

There was the unconscious NPC in the midst of a full respawn. My thrall and I cleared the lot, then dragged the BL back to the wheel. Successful, but tedious.

So next, I went to Trello to see where the bug stood in terms of prioritization. Perhaps I used the wrong search terms, and certainly did not read every issue in every column, but could not find it at all.

So, is it on Trello or did I just miss it?

Either way, am I the only one this affects?

Regards, and thanks for game 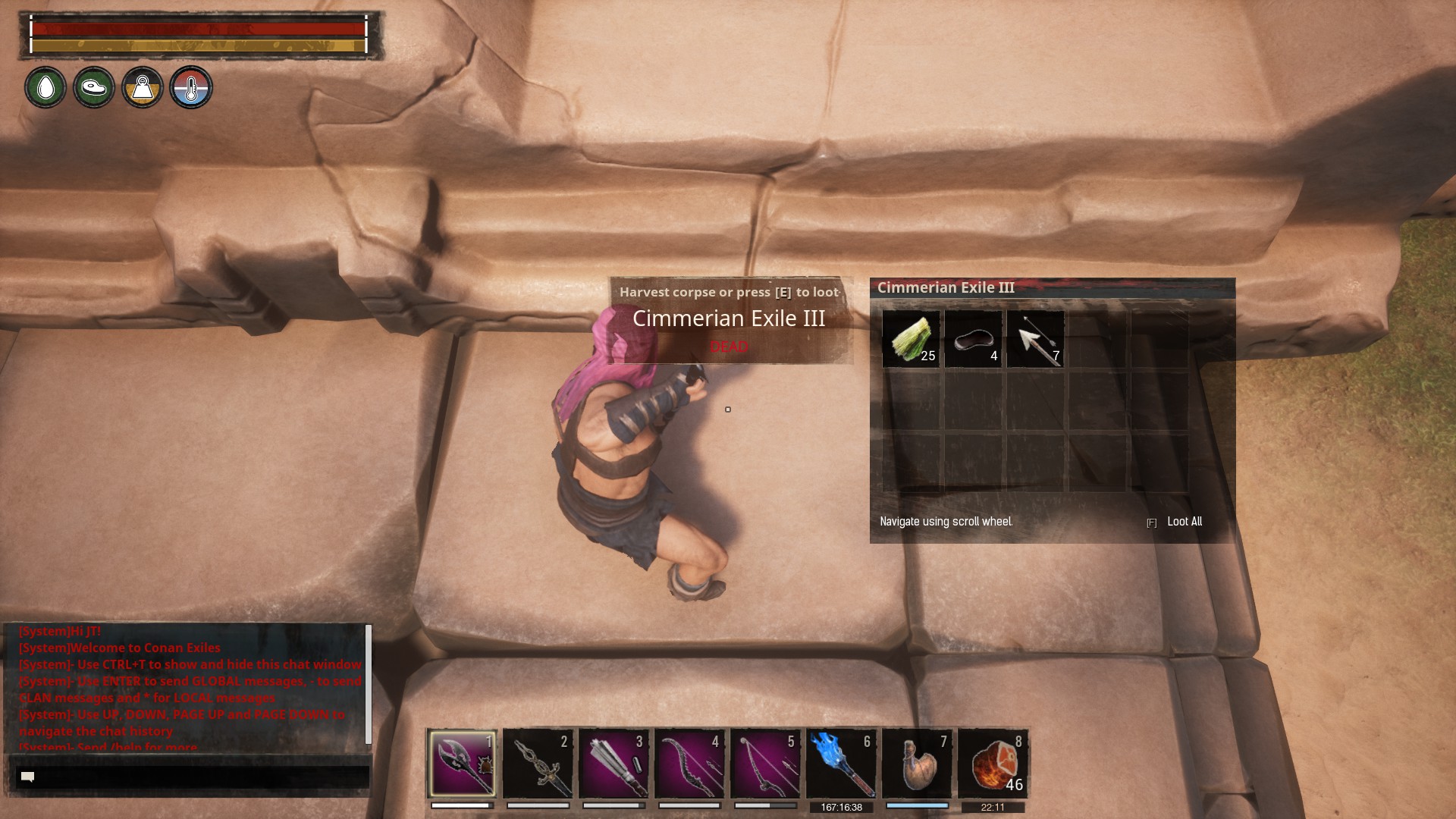 It happens all the time on our private server. Usually, it is enough to turn your back to some thrall that just dropped on the ground to loose dead or unconscious body. There are few tricks to make them re-appear: quick re-login (our preferred way right now) or force zone to re-render by moving away great distance and coming back. A clan member if he/she was not with you at the time will most probably see missing bodies as well. Funny thing, when coming together on a mission with a clan buddy, we end up missing/loosing different set of dead corpses and are able to recover almost all of them. Well … most of the time.

Well put, Ladybug. The only thing not done was a re-log. I did not have a clanmate with me.

Still, what you and I described are workarounds for a bug, eh?

This bug has been around for long time, they have tryed to fix it but its worse now than before

Thanks for the heads-up.
We’ll send a reminder to our team about this issue and see if they can look into it.

@Ignasi or anyone else …

Did I search incorrectly or is it on Trello?

this bug has been around for over a year now. relog helps and some times re-rendering does exactly what they said above. as for the devs fixing it… yeah good luck

It’s not on Trello, but we’re keeping track of it in our internal bug-tracking tool

Thanks, Ignaisis. On other matters I use a Trello link to help assure people who are frustrated that Funcom is aware, and working on, their particular problem. It seems to help their frustration when it comes from an official, maintained source. Since I tend to monitor these forums while you and the team get some well deserved sleep, it seems to help smooth out the forums and let people stay on track.

Trello appears to be designed to allow people to collaborate on a single goal with focus from the top down. In this case, simply put, maintain Conan Exiles in a manner where all users have fun. It also allows a limited ability to collaborate from anywhere in the world unless there are other functions behind the scenes, very limited.

Your secondary goal with Trello is communication to and from the player base about specific issues that are bound to arise in a game of this complexity, thus getting some form of feedback about what is most important and assuring them it is on the dev’s radar.

I do not want to lose faith in the tool, nor do others, and that’s what I experienced.

While I appreciate and understand the need for your internal tool, I see no reason this is not listed.

That is awesome! I hate this bug at the top of most. Thank you guys for taking a look at it.

In my experience, if this is the same bug and not just one that has the same visual (dis?)appearance, is that the knocked out/dead thrall doesn’t vanish per se, he/she sinks into the ground mesh. He/she can still be interacted with if you can find the exact location of his/her body, so you can loot the body if dead, or drag him/her home if alive.

It’s still a bug, of course, but the more accurate information we can provide, the more we help the people who fix bugs. And since you seem to be an awesome fellow with your precise and informative bug reports and your patience with finding and investigating them, maybe you could do some more science with this phenomenon and check if it’s the same bug for you, ie. if the thralls are just sinking into the ground. (I can understand they get this sinking feeling when someone hits them on the head with a steel baseball bat and plans to enslave them.)

I just step away from the area, and then come back. When the area is re-loaded visually, then the undermesh body returns to the surface.

Yes, this works as a workaround, but it’d be great if Funcom could fix the bug.

@Kapoteeni, I originally posted regarding the, as you term it and Sylen described it, visual bug. There are instances where a simple line of sight alteration makes the corpse/unconscious thrall reappear, but not often. More than likely, respawning the cell is necessary. Just as often, a relog works (again, a form of cell respawn) and the thrall appears in a default position, vertical with outstretched arms. Sometimes, nothing works and I can find no way to locate.

It is possible in the last case that the thrall has disappeared undermesh, but unless in solo mode I would have no way of determining that (not admin for my online server). I could see if the same thing happens in solo, but the time involved and the somewhat rare occurrence of a completely invisible thrall makes that unlikely.

Did that clear up the OP?

If so, do you have any suggestions for further testing that can aid the devs?

We do have @Ignasi’s assurance they are working on it and I would like to present them with enough information to allow them to quickly isolate the offending code.

I use the workarounds in the following order to minimize time …

BTW, I have taken a bat to the head, but it was aluminum, does that count?