Abysmal remnant has spitting animation but no spit. Does not attack.

I know this was reported in May for the PS4, and I know the team was looking into it. I logged back in yesterday on PC, and the issue persisted.

I have observed this both in single player and in PvE on a private server.

RESULT: Remnant may or may not turn to face player. Remnant occasionally has spit animation, but there is no poison effect on character or visual effect. Remnant never tries to physically attack player. Because remnant’s healing speed is faster than a character can inflict ranged damage, remnant cannot be defeated.

Neo is correct. On live, the Abysmal remnant is bugged. The devs are aware of the issue and are working on it. I have not personally checked him on teslive to see if it’s fixed there for future release; perhaps someone else has?

If all you are after is the recipes and cheevo, no thrall required and if you know where to stand, it takes 4 poison arrows. In general, since the bug is present, you can stand just about anywhere.

On testlive servers, he is functioning as expected. For testlive singleplayer, there was a report that he was still bugged, but I have not yet verified.

But for bug - that what he has , that allso affects warrior/archer thralls… by the way. but not all times, its like they dont see enemy at all and on commands does not attack ( same actually style as remnant ) u guys should do something with this… urgently… Remnant is just most times bugged, but thralls do this also…

I just mange to kill him this morning on an Official PvE server. I had a thrall with set venom arrows and myself with poison cloud arrows. He was bugged of course but the poison effects still kill him. Try it and see what happens.

Anyone else notice the lizards in the first room behaving strangely too? you can’t target them until they start attacking you, well after you push them across the room eating away at their HP, so by the time they start to work right they’re dead…

Anyone notice this too? Is this too fixed on TestLive?

Maybe there can be a way for the devs to test these things by putting perspective cameras on the mobs so they get a little view of what the mob see’s, maybe there’s a texture obstructing their targeting view, idk how it all works exactly.

I just know that the boss only ever started attacking me when i swam to its left side and started slashing it in the sewage, then it spun and flung out onto the platform, and trapped me inside of it… it was not a very pleasant experience…

I just checked the dregs boss in testlive singleplayer mode. I enabled god mode and spawned in a good bow & arrows, went in without a thrall to minimize variables. He performed all 3 attacks: the poison spitball at far range, the poison splash at medium range, and the belly flop triggered by getting close. He was hostile the entire time. Seems to be also functioning as expected in testlive singleplayer mode, as far as I can tell. So the fix is coming.

Made him last week with a clan-mate, as he started new.

He didnt attack us with his ranged spew attack. But he jumped out normaly without any problem. PvE @ official server @ ps4.

Same issue here on the PS4, both online and offline.

There’s also the issue of going in there and the boss just isn’t there despite the boss music playing and some sound effects. I only discovered this because I had enough of the boss having the health reset, so I just went out of there and went to do other things, only to return later without a Thrall (to see if it was them making the aggro be lost) and find the stupid thing bugged in a very different way!

I’m an admin on a PC Private Server, and this has been an issue foir months. I’ve posted in other threads about this, and keep hoping there will be a hotfix soon, but by now the fix would be anything but hot. >.>

Anyway, yesterday I had to run dregs for our custom daily quest, and the boss still would not engage me. Thank fully I had a good bow and was able to kill it no problem. Then, an hour later someone! else made it to the boss room and there was an acid pool and no boss. By the Power of Admins, I ghosted under the mesh and there he was… 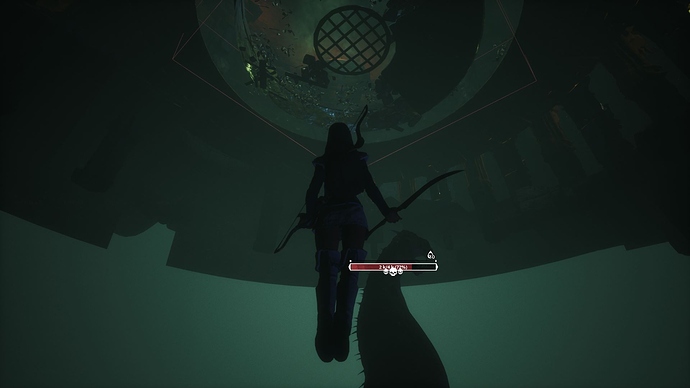 I was able to hack him down, skin him and give the people running it the drops, but this happens more often than not. People are just skipping doing this dungeon for the most part, along with other dungeons as well due to the issues with bosses, and thralls following along. (Or NOT following along, as the case may be.)

Other dungeons have issues as well, like the witch Queen fight against the statues when you enter: 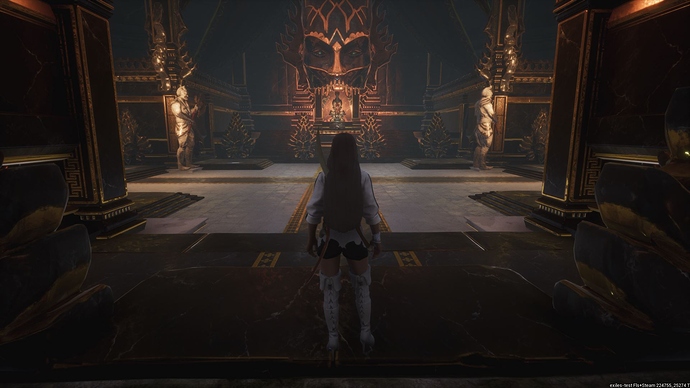 Notice the right statue is facing out? You can’t target him when he’s like this. Usually I’d pull both and keep their health even so I get less green Laser dodging on the last one, but now this guy won’t pull until about 30 seconds after the first one dies.

Other dungeons have similar issues and bosses that fall through floors. (Red Mother does this now… Annoying AF!)

All we can do right now is try to be patient with getting these things fixed.

there was an acid pool and no boss

I haven’t encountered that variation yet.

We also have this problem. Most of the time the Abyssal Remnant gets stuck and doesn’t attack nor die. PC - Private - PvP