[Extremely Hot, Extremely Cold deals damage and Frostbite/Heatstroke Deals A huge amount of DoT compare to it was. Vitality Perk 3 Normaly over heal Frostbite and Heatstroke, its not the case anymore.]

Please provide a step-by-step process of how the bug can be reproduced. The more details you provide us with the easier it will be for us to find and fix the bug:
1.go to a cold or hot area/place

I was literally running around 5 minutes ago with Frostbite, and 30 Vitality regen alone was enough to basically completely negate it.

the difference between players managing to negate the DOT with the health regen perk lies in the armor rating.
The more armor rating the more you can negate, and if you have enough cold/heat protection it can make a huge difference from one player to an other.

that makes sense. but i ddnt see anythin about that on the patch list

Is it armor rating? Or you mean +heat/cold rating?

I’ve been running around the far/coldest north spots in Epic Khitan armor and been fine.

But I also often teleport to the ice bridge in heat gear (medium armor with heat resistance) before running down to New Asgarth and I get frostbite there but it doesn’t hurt too bad.

Maybe it is just light armors that really suffer a ton?

The patch notes contains this line:

Maybe they made more changes than that line would imply.

but this is insane, just by standin inside house the temperature changes a lot. and a normal status like "Extremely Hot or Extremely Cold that normaly dont do damage it have like a lv5 poison.
and Frostbite/Heatstroke have Massive DOT damage. its not normal. I have perk vit lv3.! 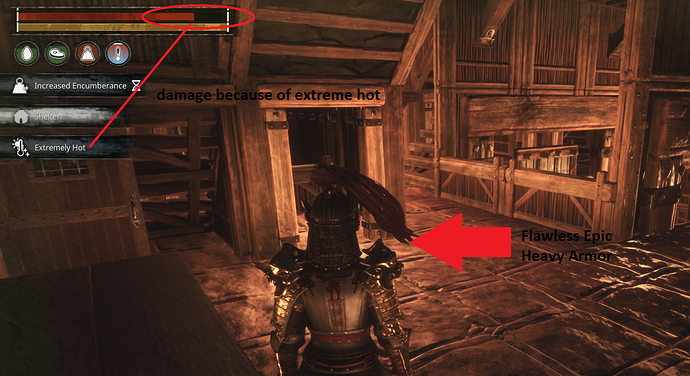 I’ve also been seeing comments that thirst and hunger seem to be more extreme now. Maybe Funcom made the environmental hazards more dangerous as a cheap way to make the end-game more interesting.

Do we take more damage from falling too?

i check it up. fall dmg is normal. im not againts spicin up the higher maps but this is goin overboard. im in the freakin Highlands near New Asagarth. Temp should be normal. i know my armor have 4 res but still its too much

If it is consistent, I would chalk this up to a feature. The environment was alot more harder to deal with before live. This might be a return to that.

Dress, buff, and prepare appropriately for the weather at hand.

same, and bring Always 2 or 3 set of armor for each env havin multiple base all around the globe is harsh and take all your inventory and make it already full cuz its heavy

I was fine till i respecced ( yellow lotus ). I only wanted to add the new religion in to my feats i kept my attributes exactly the same( as before ) as follows:

Now im taking negative damage in heatsroke/frostbite areas where i wasnt before.

Prior to respec i was able to wear silent legion ( or aquilonian equivalent ) heat protection armor ( or cold protection Khitan versions ) and not take damage.

Seems when you respec since the new update you will take damage in high heat/cold areas. Be warned.