I’ve not been able to get in to check (well, I got in when I removed all mods, but I’ve put them back and would rather wait for the updates), but KiahOnFire definitely managed to spawn them all in for a video - she may well have been doing it on a server with admin commands, but there shouldn’t be any reason it would be absent from singleplayer if it works on a server.

Great! Thanks very much Dan.

Yes, it all can be spawned in singleplayer.

Knocking him out will not drop a chest

Put the thrall in a wheel without teleporting and the chest will appear. We have placed wheels near the Mounds and Buccaneer’s Bay for this purpose. The Summoning Place thrall does not want to go to sleep.

We are seeing events spawn about every 15 minutes, which keeps us from doing much else for the next few days as we collect what we need.

The event worked this morning. I really enjoyed it. And though I understand that some people are disappointed that you can’t get any recipes, not everything has to be about recipes. I like the size of the event and I think the rewards fit the effort it takes. That being said, I do wonder if the event is working as intended, with sometimes only a glowing symbol where the event should be …

We are currently looking into the event taskmasters and markers issues. We will update this thread as soon as we know more.

Thank you for your patience and understanding while we look into these reports.

i got this thing today, but it just appeared with delay - so far its looks like map marker spawn first and actual event- onlly if someone is near, and the guy may fall tru terrain, but not die…
5 times did event 3 times ok , 1 time guy just turned invisible , and respawned, 2 time i did not found chest and event marker just stayed on map until next one spawned (siptah)

I’m having a lot of fun with the event and still trying to gather all the items.
Especially the placeables are great, I wish we had walls etc. to match the abandoned look. (How about some ‘spiderweb spray’ please

)
But is it intended, that those items are somewhat under scale?
Don’t know about the others placeables (yet), but the tables especially the round table look like pieces of furniture I would expect to see in a Hobbit dwelling.

Concerning the Master Cultist Set:
Is it only my typical luck, or is the drop rate on hood and skirt a little lower than the other parts?

I will tell about examples from other things, for now sea of thieves is only i can make as example…also league of legends

About event drops
They are time limited but may return in future but is not obtainable in game unless paying real money or u got them during that time gap of event
(example of league skins : like x-mass skins are time limited but always stays to acc of those who get them, but also reeturn later on other x-mass. Another may be sot events of damned, u protect something and u get limited item, that later u can get by 5 Euro or wait till next free event or maybe twitch drop)
what i say is that - like twitch event of conan, there was spider gear that if u spend time on twitch u got them… so now to what i am aagreeing
Yes to : if those items return in same way time limited way like new conan event about zath religion, or for some dlc to buy with money
No to : if those drops turn ‘‘regular’’ because then watching twitch was damn time waste…

so this is what i am up to now also, if these items are buyable later/stays bounded to accounts that got them now, and are obtainable tru next twitch drop or another event. But is not part of regular game… I think thats how works ‘‘event’’ drops and ‘‘drops’’ at all,u was online at that time or next event or whenever it drops , thanks for playing ourr game, here u have reward… not like ‘‘yes u wasted 5 days in row to get spider armor and now its obtainable to everyone’’ i mean - u played game u got items and thy are yours, u missed it dont worry will be another event, someday but not part of regular game…

this is what i try to say

Been having some spare time today, finished about 10 events.
Didn’t get a single placable item today. Got 3 yesterday.
So I think this mornings update changed the way/amount placables occur.
Can anyone else confirm?

So the summoning place finally popped the event, but others on the server were there first. I got the shoes from the chest at least.

Did a few more events, still no placables (after about 15 events)
And catching the Overseer still works, managed to get one in wheel of pain

Alright, so the summoner is an overseer?

I’m curious as to what type of thrall they actually are. No fighters then?

The Mounds and Flotsam summoners are overseers.
The Summoning Place summoner is a priest, but cannot be knocked out.

There are some furniture pieces, like a bookcase, table, cauldron, scroll, and of course the armor set. The cauldron has floating eyeballs in it!!

Is it only my typical luck, or is the drop rate on hood and skirt a little lower than the other parts? 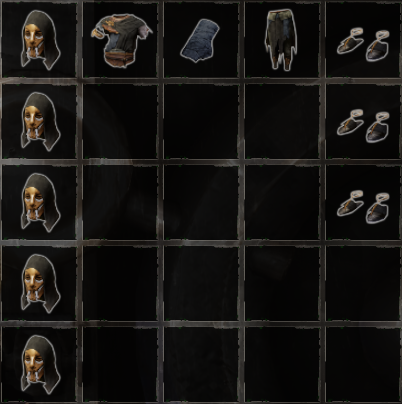 What is wrong with this update? Minus some hiccups that some people were having, this is very good update.

For the modding community - more work updating the mods and modded servers - sure, we are all out of commission for the time being. I have 3 servers that be offline until next week most likely, so I know the pain. This is due to the fact I run 49 mods on the 3 servers. This is usually expected when big patches are released. A bit more messy this time around since it effected more mods than normal.