Io the Mad doesn’t make legendary armor patch kits like she is suppose to.

Put her on a tinkers bench.

I tested all durability armorers, including purge thralls. I tested every armorer w/the hammer symbol. It’s totally broken. Has been since testing prior to release of 3.0. Many hoped it would have been fixed by now, but not even sure FC aknowledges it yet. Gonna have to farm them until they fix it. There’s new Bazaar items for purchase though, so… 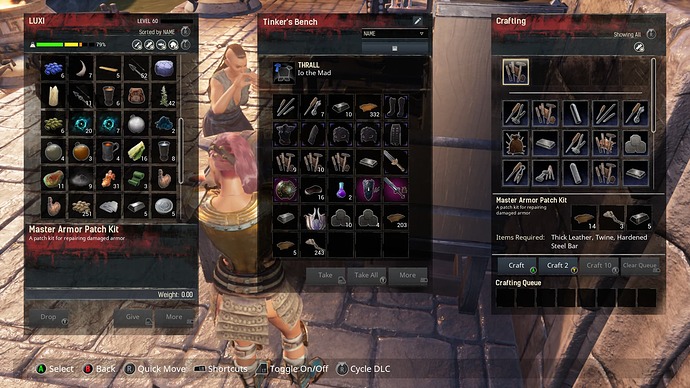 i have the same problem lets hope they fix this soon as not only Io the mad, i just put deyn of kush in and also have that problem

Yeah, that’s what they all do. There you go, Funcom. That’s well enough to get crackin’. We should expect a fix before, if not, at the very least with the next Bazaar update then, yes?

What do the prices in the Bazzar need to be in order for you to fix the list of bugs released with 3.0? Because you’re charging quite a lot for items to play with in a broken world.

It’s been over a month. Some kind of official word would be good. Actually, it’s expected at this point. You broke my product in many, many ways. What are you doing to fix it & what time frame are we looking at here?

That may be your machine, unfortunately. With each new update, Conan Exiles grows further and further away from the original Xbox’s ability to run smoothly. I run Series X & have virtually no issues. I’ve had a random crash here & there, but nothing more than my other Xbox games. Which box are you running Conan on?

Xbox one im disabled and cant offord next gen

This is across all platforms. It’s every temperwright in the game. I’m on PlayStation and have the same issue. There’s also been topics about this issue on PC. It’ll likely get patched (no pun intended), but no ETA on it currently.

FYI, if you guys don’t already use the ”Conan Exiles” discussion on the forum, I strongly recommend it. Don’t just focus to the Xbox topics. You’ll see all topics posted under “Conan Exiles” and likewise be able to keep up on how widespread the bugs are, like this one. The only catch is that you’ll have to click on the appropriate categories before posting a topic since it wants you to select one first. However, hopefully you’ll get the information you’re looking for before that’s necessary. It’s helped me quite a bit.

Just want this visible until there is a solution

PVE 2131 is the only one im having issuses with

Yeah, I noticed no fix yet.

Yeah me too lol

Just keeping this alive til they answer. Am I wrong for wanting my product working the way it did before they broke it on Sept 1st with their known, busted update? Any other product bought that was defective like this would garner a refund. Why game companies are allowed to skirt this repeatedly baffles me.

Not sure but would be nice. One game I played alot just decided shut it down one day any i spent over $100 on the game it self

Seems the same questions that were repeated during the live stream were ignored. I don’t remember if this was one. I think it was, but can’t be bothered to watch again to find out. I really don’t remeber them talking about it. I remember getting a bit heated when they said server transfers were “on the radar”. What the F does that even mean? I have a feeling that I’m ultimately gonna have to reset my character/server to fix the majority of the F ups from the last 6 months of “fixes & updates”. I will lose all my Siptah knowledge i have in the Exiled Lands when I do this.