Hey gang, i know the recipe drops (super rare). But i was told some beasts drop the potion? Wondering if anyone is able to tell me what ones???

I got a bunch of a white eye crocodile

Normally all the one skull bosses may drop it (farm with pick), however it could be for feat points too or nothing. If you don’t have the midnight alchemist use yellow lotus but you have to reset all the feat points as well, which is annoying. Surge center, any tier may drop the midnight alchemist, or kill one skull bosses, yet they last 1.5 min, so you ain’t going to be able to salvage them until you reach on your base. Summon center surges is the best option I can give.
Main beasts with drops I find east (some yeti form beasts) and in the south, that’s all the help I can give, I still didn’t unlock Siptah for good, sorry

The bestial memory and natural learning potions have a really short timmer until they vanish!!!
So unless u wanna do it on the spot its useless

@Ragnaguard
Exactly!!! Do you remember exactly the surge he has to summon to gain the midnight alchemist, it was the center isn’t it?

Den people and werewolf people hold some. I would farm like crazy the pools though. Lvl thralls And get a ton of materials…

True! Yet imagine that 8012, 6 months of pool farming and the midnight alchemist either the deep fishing dropped! When I finally started to deal with surges my luck changed

Hey gang, i know the recipe drops (super rare). But i was told some beasts drop the potion? Wondering if anyone is able to tell me what ones??? 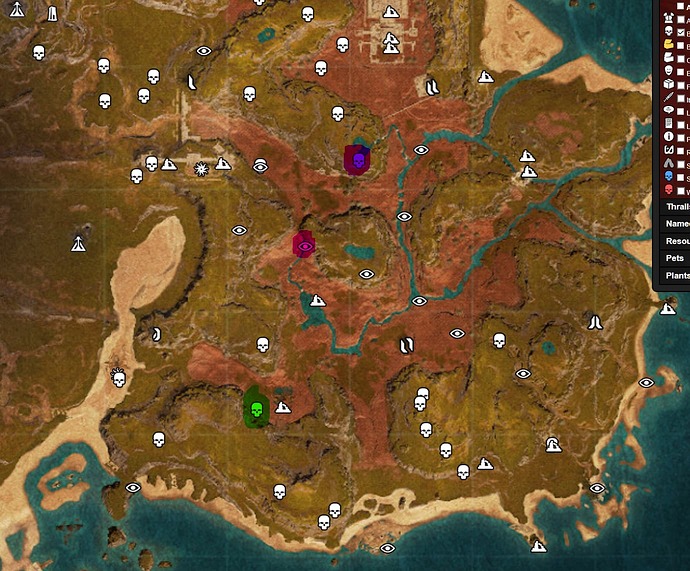 The Yeti boss I used is near the purple circle and the bear is near the green circle. The potions last 3 minutes IIRC before they expire so time your ride there. If it takes longer than three minutes then build a little platform and place an Ice Box there. Add a marker to the map so you can find it again and make sure the outpost has enough T4 blocks so that the decay isn’t too short.

My base is where the pinkish-red circle is and I was able to make it from the Bear and put them in the ice box at my base with 20 seconds to spare. And from the Yeti with about a minute left on them.

Alternatively, you can just use this same map and visit all the bosses in your area: Conan Exiles Interactive Map - Isle of Siptah

Thanks mate!!! What do you normally use to harvest??

Ummm… I think I would probably use a skinning knife on those two - but only cuz I wanted their pelts too. The cleaver too maybe for the yummy meats. When in doubt as to tool yield though it’s usually the pick-axe that makes no mistakes. Others will know more!