I would love to see a list of “game breaking” known issues displayed upon login into the game !

a clear example is the yellow lotus feat bug , that we can see new topics created on a daily basis on the forum from people that transfered servers …
it’s a known issue for some time now ( over a month !!! ) and still a lot of players may be unaware of it
and other than coming on the forum to keep updated on the latest “bug trends” there isn’t a clear space where you can see this information without digging through the forum .

So my suggestion is to have a dedicated ( red for visibility ) space upon login into the game that would display a short list of the very naughty “game-breaking” bugs . It could prevent a lot of frustration !

@Kanza1 , How would this work exactly? I agree very much with the idea but I can’t understand how this would work. Other than that I can still see complaints of," you warn us for your bugs but you do nothing to fix them". In any case I like the idea very much. If I can suggest something more here, it would be nice to have a pinned page here updated with the current bugs of the game. This way several persons wouldn’t have to report 20 times the same issue. For example on Playstation bugs maybe 10 or more different persons report the admin panel issue in different topics

. @AndyB did a wonderful job rearrange the pages of the forum, I like it more and more each day. But I don’t know what permissions are needed to create a pinned page for current bugs. I don’t think it is so simple as I assume.

I also don’t know how hard it would be to program, but it certainly sounds good (and perhaps then a link from the game login page to that pinned list, which might save needing to keep updating a visible list on the game itself, if that’s more difficult…). Even if it couldn’t list every bug as it comes in, maybe it could be linked to the new ‘Report received’ system - so that as well as marking the post, it automatically adds it to the primary list. That way Community would still have control of what gets added to the list, rather than just adding every (sometimes crazy) bug report, but the list would automatically grow with each bug that Funcom has acknowledged. (Again, I don’t know how hard that would be to do, but it seems like something that could be good).

To be honest I am not speaking of an exhaustive bug list , rather a very consize one , with the very few “game-breaking” bugs , like the yellow lotus potion one that makes you “loose” hours of exploration ( I put loose into quotes because there was already another bug where you would loose them upon death ( e.g the vaults feats ) and when the fix came in , you didn’t had to go back exploring they re-apeared ) , with indeed as you suggest a link towards a “broader list of know issues on the forum” .

To summerize exactly the idea that lead me to post this topic is : " Hey , wouldn’t it be great if when a game-breaking bug appears , gets reported , aknowledged and is hard to fix quickly , to have at least some type of easy to see for the “Dummies” ( I’m not calling anyone dummies here , just saying that even if they were dumb it would be visible to them too ) Warning of existence of said bug .

Focusing in on the key ones makes sense (and I guess could probably be identified pretty quickly once the reports start coming in). Certainly we’re still seeing people who’ve lost feats to yellow lotus, and at least the later ones could have been saved.

Approaching from another direction - this would also be the kind of communication that the player base might appreciate, and often calls for. (Though, of course, the complaints would inevitably follow - but then that seems to be the way with everything - there are always complaints, so maybe it’s better just to do what seems best and accept that there will be complaints no matter what…)

Of course it’s better to be warned no matter the complains. People that want, like, to complain will always find a reason

. I just mentioned the other option for relief the bug section from the same and same reports. Once @Multigun said that he had to dig for hours to find bugs reported from all the confusion we cause to the topics in the bug section. I say we, because I did this mistake my self a lot of times in the bug section. I was starting the chit chat in the bug topics. @Croms_Faithful once had to ask me not to do it in his bug report post (love u Croms). It took me some time to understand some things, I am no better than anyone here

. I just humbly apologize for that. Now I try to post less in the bug section unless necessary.

Perhaps where you put server message of the day on private server before you animate your character?

A nice idea, but unfortunately single-players won’t see that screen. I was thinking maybe it could go on the main login menu page - at least on PC there is a ‘news’ box on that page already, I don’t know how it is for consoles? Or maybe it could go somewhere on the initial screen of the Funcom Launcher (if that’s something that consoles also use? Actually, thinking about it, it probably isn’t, so I guess that’s no use…)
It needs to be somewhere that all game modes and all platforms would see, so I guess it depends what screens we all have in common.

Will have to check the loading screen this weekend for ps4 it lists dlcs and a few other things might be room there
.

was thinking maybe it could go on the main login menu page - at least on PC there is a ‘news’ box on that page already, I don’t know how it is for consoles?

We have that on console, at least on Xbox. I think that would be a great place for it!

Sounds like maybe we all have a version of this screen: 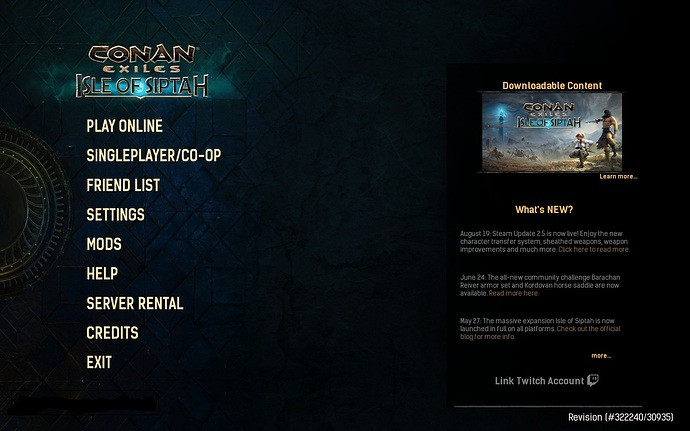 This says alot. The patches for CE create so many bugs, that there is a suggestion to make a warning page or menu…

How about FC just fix the testing parameters? Then every patch wouldnt blow up the bug reports section. Then the fixes written would work as intended. And require less back tasking to fix the inevitable bugs that occur from these patches that are tested but srill create so many unexpected bugs. How can a patch pass testing AND prevent log in for 3 days due to unexpected bugs? I decayed because i couldnt log in for 3 days. Almost half of a full decay timer.

Its like a cigarette company says they got the lowest tar cigs ever. They tested em. But you find out the tested cigs weren’t lit. The test is nothing like the real use. And thats what we got here. Patches that pass testing, and surprise the dev team with reports that need to be passed on to them because they were unaware of how the tested patch would behave…testing is useless if you cant predict the outcome based on those tests.

The time wasted leads to more thralls lost. Not less thralls lost. Gotta wait till they get the reports before they know how a patch behaved. Then back task to fix it. Weeks go by and plaayers get to just deal with it or quit. And the fix that takes weeks to months to deliver does the exact opposite of what it was intended to do. A total waste.