I enter the city and immediately I’m attacked by the various bandits and prowlers.

If I stand my ground, I’m overrun.

But if I run its worse, because they trigger aggro on ALL npc’s. So when I try to fight one or two prowlers and I want to withdraw and regroup: suddenly eight npc’s are trying to murder me.

I’ve used a thrall to help, it only prolongs the inevitable.
I’ve tried sticking to the rooftops and lobbing bombs but they don’t do nearly enough damage and have accuracy comparable to a drunken monkey flinging its own poo.

Because I’m on the PlayStation, switching weapons or activating healing items in combat is borderline suicidal, never mind if you actually need to access your inventory. Which means that if you try to capture a thrall, you usually wind up trying (and failing) to bludgeon the entire lot.

I’m running flawless Dark templar heavy armor and either an atlantean two handed sword modded for damage or a khopesh with same.

If anyone could either please tell me what I’m doing wrong or offer their own strategies that would be great.

Because I’m this close to writing off that entire damned city and thrall hunting elsewhere for tier 4.

I know the location you’re talking about. Died there a few times. You’re absolutely right about the water escape I’ve used it. What’s been happening is that I can’t kill them fast enough. I wind up needing to run and they get all their hp back.

I hadn’t thought of using sunder though. I plan on making my t4 warrior a warhammer and either augment to be lighter for more speed or heavier for more damage.

By the way, can you change a lethal weapon to non lethal with that blunt enhancement? Or put two enhancements on the same item?

btw can u share some more details about what ur build and what armour and weapons u use?
maybe i could help by pointing out what u need to have on u and how to react… i kill those alone with no thrall in a fighter build , but must adapt to picking one at a time on hmy harvester build…

some more info (like ur level , ur attributes and ur weapons and armour would help to point some stuff that could try to make things easier to u

I’ve access to all dlc except the riddle of steel. I’ve got 4 named fighters at my disposal.

So I’m happy to try any combination of arms & armour, I have no preference.

even though what @chaoruk said is true and will help u i spent some time making a video and analyzing the way i am doing it… keep in mind that i am on my harvester build (as i wanted to show u that can be done despite the levels seperating our characters… ).

the herbal tea along with derketo feast will give u a massive bonus at the state consoles r now , but upon new patch this will change , so do not overinvest in herbal tea or aloe soup… 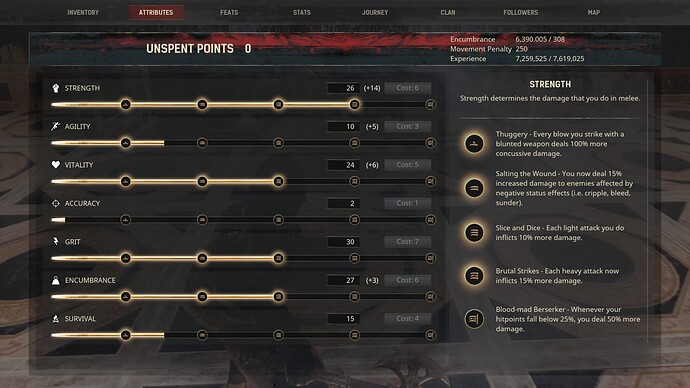 and my gear is thisQ 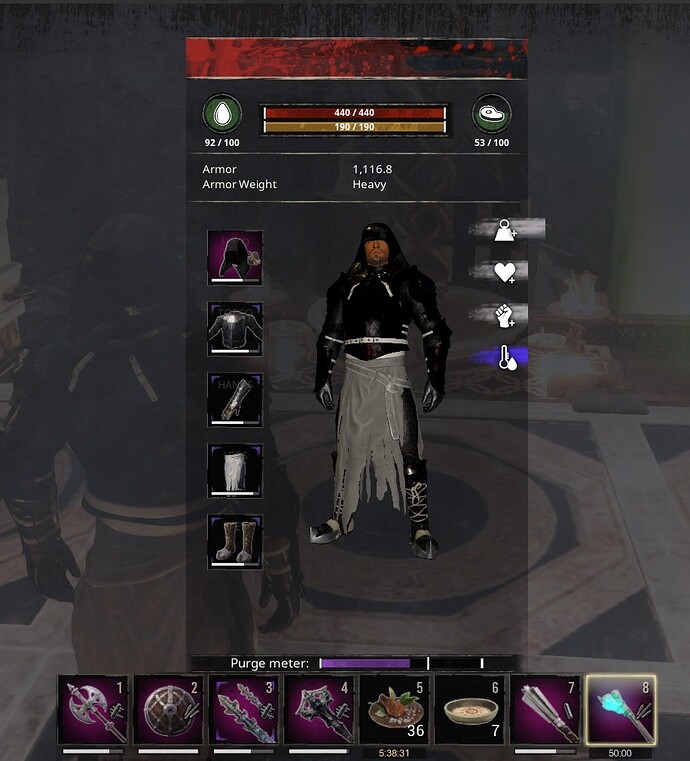 the gear is old yog touch (or axe of the lion) both with spiked fitting on it, black bruarghs shield , dagon daggers , and croms hammer , i use derketo feast (the one u see is lasting feast used for causal raids -like clearing new asgaard) and ambrosia… i always carry my truncheon and rope with me and lastly my torch…

i also use alcohol to get drunk (u can also achieve the same effect by using directly 10 crimson lotus dust) and immediattelly set potion so i remove all debuffs . this adds +3 to strenght and +3 to vitality which i find way better than tattoos as it way less costly… and for encumbrance i use a simple elixir of numbing (+3 encumbrance)

if u r intersted te harvester build i use for the video is this : 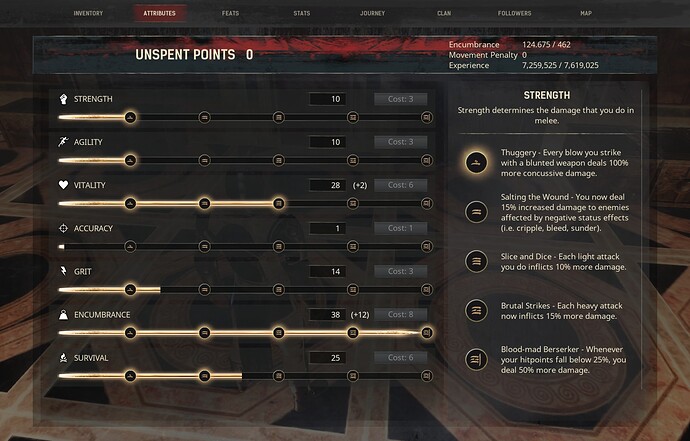 and the gear i wear is this 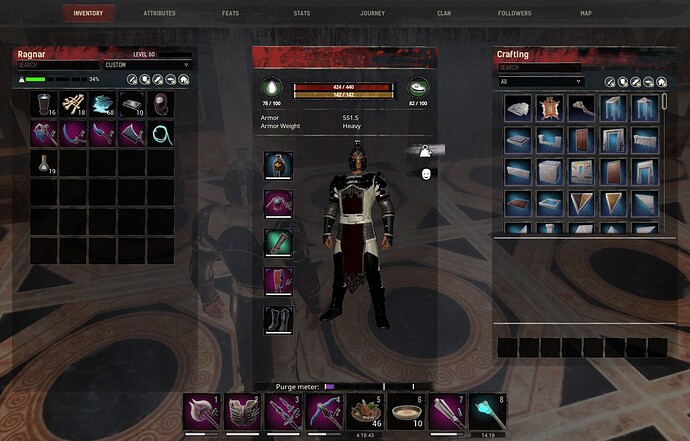 the aquilonian medium helmet , the poitain chest and pants the yamatai demon hands and the redeemed silent legion boots

as gear i have only dragon bone axe and dragon bone shield (for my harvester i carry the shield of zawbeth as with the +5 survival i hit the hard worker perk, but for the video i chosen a craftable shield. and the snakebite daggers …

once again feel free to ask anything u like

EDIT : had to bring video down due to poor quality and sound! i am sorry for this! will try to edit it with captions…

“I also use alcohol to get drunk (u can also achieve the same effect by using directly 10 crimson lotus dust) and immediately set potion so i remove all debuffs . this adds +3 to strength and +3 to vitality which i find way better than tattoos as it way less costly”

This was the only thing I didn’t understand.

What is the purpose of getting drunk? The endurance buff? Doesn’t it make combat more difficult?
What potion do you use to remove all debuffs? Bleeding damage is my Bane and wraps don’t always work fast enough.
I haven’t experimented with tattoos yet but it sounds useful.

Thank you for all the help!

In game, I mean. I’ve grasped the point of getting drunk out in the real world.

this is a great advice… given the changes that will follow

keep in mind that buffs from rare fish , potions/elixirs and tattoos do not stack…

Good news is that I’ve got myself a t4/named armour already, so I’ve been crafting flawless armour (at least until 2.3 drops and they do away with that on console).

But I tend to craft all my gear, I don’t go hunting for a specific piece usually. Sounds like I may need to revise this strategy.

I’ve spent time at Muriela’s Hope and learnt the emote from the priestess there, but I’ve not constructed any altars to anyone but Ymir.

and stay away from rottenbranches…

“also keep in mind that when u die both buffs from drunkenness and tattoo fade away…”
I was assuming that the drunk effects would cease upon death, but the tattoo buffs as well? I assumed that the boost was permanent given that it’s a tattoo.

when 2.3 drops the falwless armour will be not repairable… so do not craft a lot… better focus on the harvester build to get some items that u will struggle a lot more to get after the patch…

A friendly reminder to all console players... (Upon oncoming patch) Players Helping Players

i could give my personall opinion , but keep in mind that i have a special playstyle and i use no thralls , so tips will be based upon how i like to work with those aspects i will comment…also i speak as a pve player… 1st the healing system … Ambrosia is ur friend… all food is now meh upon healing (only god food is kinda usefull) for they fill hp over time (the effect is named sated and heals up to 17hp per second for two mins) … i personally prefer something easy (like lasting meal ) for ove…