i started play Conan exiles with my friends and we were messing around with the 2 types siege weapons and were thinking of different types for example they could add a ballista. what types of siege weapons you think they should be added into the game

I agree, Bailista is something we need

Assets created for the Conan Exile mod "Conan's Cannon Fodder". The ballista has a normal and a fire texture for the two versions in the game. Gameplay footage is at the bottom where you can see the mod as well as some of the assets in the engine... 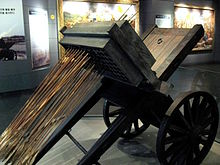 A hwacha or hwach'a (화차; 火車) (fire cart) was a multiple rocket launcher developed by Korea, first deployed in the defence of the Korean peninsula against Japanese invasions in the 1590s. It had the ability to fire up to 200 singijeon, a type of fire arrow rocket, at one time. The hwacha consisted of a two-wheeled cart carrying a board filled with holes into which the singijeon were inserted. Some East Asian historians believe this technological breakthrough, alongside the turtle ship in the mid-...

A Siege tower could be so cool !

Today i wanted to share an idea based on what i’ve seen on this forum and what funcom was saying before the game release in early access. It’s about siege tower. i think such a feature could find his place in the raid/siege possibility while adding another depth to large skale conflict. but first, here’s the visual i had in mind (mostly because i know my english isn’t flawless so a picture could explain better than words in this case) [tawah] It would be a 2 or 3 man operative tower. The ide…

Yeah. Siege towers and battering rams would be a fun addition.
It would also be fun if there were mangonels or onagers to add variety to the siege weaponry.