The game has some nice dungeons, e. g. the Wine Cellar and the Well of Skelos.

More would be nice. But more costs development time, which in turn costs money. That’s especially true if a contractor is hired to do that, e. g. Snowhunter (of Wine Cellar fame and author of several nice mods, to include some blatant advertisement).

That leads us to the question: Fellow players, would you be willing to spend money on a new Dungeon DLC?

For most, that will depend on what is offered for what price. But let’s keep it simple and just see if people would be willing to spend some extra money on new dungeon content.

I would most likely PAY for any NEW content that comes to CE.

I would really hate to see development stop for this game…with its bad and goods true Conan World fans would probably always fund this game.

The Lore and the world i am playing in are the 2 single reasons i am still here.
Bought 3 copies of Barbarian Edition PC, from which 2 i gifted. 2 Accounts in Xbox. Own all DLC’s both PC/Xbox.

The SINGLE thing that Bothers me is that Funcom still goes Early Access way, instead of the old timer Alpha - Closed Beta - Open Beta - Release.

I Made a Couple topics about this situation, Expressed my own feelings concerning this, but i would still Support them with the hope that the game is being worked on and not dropped dead.

I voted yes, but on the condition that it’s added to exiled lands and not siptah.

I voted Yes…Because I am a Conan fan since I was a young man. Also I had a blast working with Fun com too bring you all those great two Dungeons you all keep telling me.

Thank you and Thank you Funcom.

That’s a splendid idea. I would gladly pay for dungeon DLC:s if the dungeons are of Wine Cellar quality

The Snowhunter! waves Great to see you here!

Well, so far, our sample is small, but positive. Let’s keep it going - the more people vote, the more Funcom might take notice.

Let’s dream a little… there are so many items and creatures in the Conan Exiles lore to flesh out.

Oh, my dungeon master senses start tingling. There would be so many great stories left to tell. What are your ideas, folks?

DLC have habit of going for standard price 15$ price point, and rarely are worth there value anymore.

Funcom has done fairly well with skin ones… thou I wish they would really do some of the requested ones. And kinda ignore doing a race feature one.

As for Dungeons… if were talking 5$ for wine cellar… maybe? What are rewards? more armor that’ll be nerfed and broken? cosmetic wise? worth my time? 1% drop rates?

Also… there this whole crowd of peeps who will chime in “pay to win” if DLC gear is better then anything given free. -_-’

I’ll pay for new maps and new styles, (cough cough, All race Dancer pack cough cough) Not really interested in paying for dungeons.
Its not hard no, by any means… they could be like Souls Games DLC and just really well done. But From Software kinda has my trust in that department.

I abstained from voting. Funcom made a promise to make all game content (not reskins) available in the base game (or the associated map). This only encourages them to break that promise.

Interesting aspect. However, if they promised that, didn’t the Isle of Siptah DLC already break that promise? If so, that doesn’t mean one should encourage further violations of one’s word. But if they really offer substantial new content, at least I could understand charging money for that, no matter what was said before.

For context: I say this as a former player of Age of Conan. After that whole debacle, Funcom’s word doesn’t mean thaaat much to me anymore.

Doesn’t mean that they don’t make good games, though, and need money to operate.

I’ve purchased everything else so far and keep wanting more. However you really need to assess the definition of reasonably priced, or what comes with the dlc.

The strength of the game is the open world living. Repeatinf a dungeon for the sake of farming defeats that immersion. So dungeons need to have that natural persistent problem source that draws you there over and over. Just a thought.

No, it doesn’t break that promise. Siptah is a separate map. They never said that new maps would be free. Only that things (dungeons, world bosses, special locations, etc) that are added to a map are going to be free.

I would vote yes, with the condition that I could get my teammates with me. I don’t wanna be the only one to pay for it and have to do it alone…

I would pay for the dlc but not for the dungeon. Dungeons must stay in vanilla game. The thing I dislike most in eso is that you have to pay extra to play the best Dungeons and I hate that.

I would love to see some new dugeons (especially in the Exiled Lands), free or otherwise. I honestly feel that the game could benefit from another 2-3 dungeons.

I would like to see at least 1 more low level dungeon, as lower level players only really have The Dregs, all other dungeons are higher level. Gallamans Tomb could be a suitable candidate; it feels unfinished and is also located in the Newbie River biome. Then another 1-2 high level dungeons for us seasoned veterans would compluament the map nicely. We could always create a dungeon which has The Mummy of the Ring as its end boss.

There are so many areas, entrances and ruins that could be developed. Even if only relatively small dungeons would be added, it’d increase the game’s variety and lore a lot, I think. Gallamans Tomb, for example, just seems… odd. What happened here? What’s the story behind the giant crocodile? Why - and how! - did it eat the scourgestone piece? A little tomb area with some corpses, maybe undead and a NPC or inscription to explain the situation would be really cool.

Gallamans Tomb, for example, just seems… odd. What happened here? What’s the story behind the giant crocodile? Why - and how! - did it eat the scourgestone piece? A little tomb area with some corpses, maybe undead and a NPC or inscription to explain the situation

I agree with you Khalotep. While it is ‘good’ as is it feels (not meaning to sound derogatory towards Funcom) only half realised. I mean I killed the regular crocodiles, then bested the giant crocodile and claimed the Scourgestone piece. I then excitedly walked over to the door of the Tomb itself and pressed □ to interact waiting to enter the dungeon, but then when I realised I couldnt I (quite literally!) exclaimed “what…!?” out loud, then walked away scratching my head and a little disappointed. We should be able to enter the tomb itself, maybe fight some low level skeletons as you suggested, and perhaps even fight an undead Gallaman at the end. Maybe even loot some low level weapons or recipes (about on par with The Dregs ones).

There are so many areas, entrances and ruins that could be developed.

Once again I agree. Another one which I personally felt was only half realised was The Witch Queens Palace. It is literally only the 1 room, ie-her throne chamber. Kind of a small palace if you ask me. It would have been more exciting if it was more similar to The Black Keep where the Kinscourge lies. By that I mean have one or two floors of lower level enemies (maybe some Lemurian Remnants or enthralled Grey Apes) which we fight through making our way up to the throne room itself. Its a shame, as I felt that the actual battle with the Witch Queen herself was actually very well done, there just wasnt any build up to it.

The Witch Queen Palace or the Lemurians in general could profit a lot from a little expansion.

I’m not interested in dungeons, I want finally STYGIAN DLC .

I haven’t voted yet, because I’m truly undecided.

On the one hand, I’d love to see a new dungeon and I’d love to contribute to an incentive for Funcom to keep developing Conan Exiles.

On the other hand, I really don’t want to risk paying for a disappointment. I don’t want to give them $10 and find out that I get another slot machine for that money.

If they release a DLC like that, I might be willing to pay for it after seeing people’s reactions to it.

Yeah, I agree. Nobody would want to support poorly made content. And Funcom does have a history of doing that. Even when I’m old and gray, I won’t forget this little affair…: 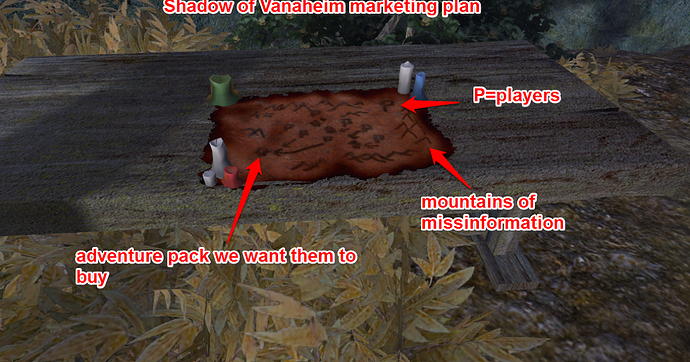 Sitting down to write this post I feel overwhelmed. Sadly not by positive experience I have had with the new adventure pack (can you lega...

Proof: I am old and gray now and still remember it.

That’s why I put the “well done and reasonably priced” condition on the “yes” option. Buyer beware, it’s Funcom. Probably mostly new crew by now, but well, who knows. But if they do put in the effort, if the developers do get the time they need, if marketing does not get greedy… might be good.