Player in France I am not very happy to discover the removal of the nudity of my character after the recent update 1.08!

What is the use of having the choice of nudity at the start of the game?

Hi.
If you are playing single player, you can just change the server settings back the way they were.
Just load the game, give yourself admin rights in the server menu and make the changes.

If you are on a rented server, the server admin would have to do it.
I hope that fixes your problem.

Maybe a bug? Its not affecting thralls

I found this when I first logged on after the patch, also. I fully dressed, then undressed, and found nudity was restored.

Like @peteboyr said, it’s just a bug and it resets after you exit the game and join back. Some of my fighter thralls weren’t nude though and had the default loincloth on, until restarting, of course.

Here’s what I logged in to this morning though 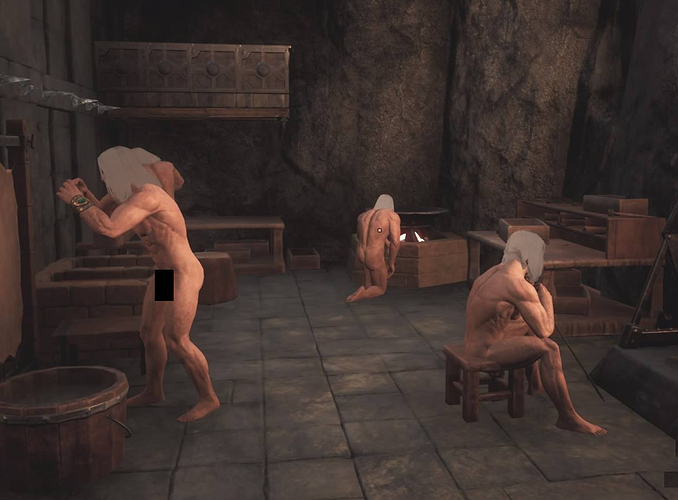 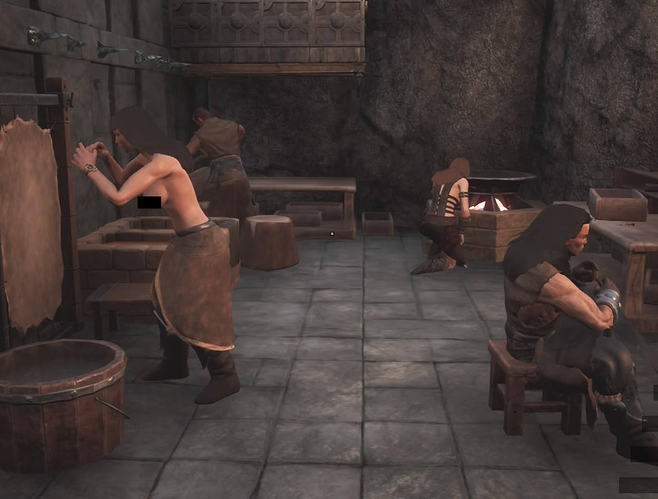 (I blocked out their bits just in case it’s against the forum rules or something. I dunno)

@Crows It looks like your issue was the reverse. I had logged out naked on my bed (I like to sleep nude! LOL) and when I logged in after the patch, I had a loin cloth on, but in inventory, I was completely naked. I figured I try dressing and undressing to see if it was a server setting issue, but found I was walking around in all my created glory!

Maybe a bug？I found this when I first logged on after the patch, also.

Hello and thank you for your help,
I am on the custom setting of the game and I am asked for the password of the server and the administrator.

I am playing traditional Chinese version. The solution doesn’s work in my game. No matter how to change setting, it always shows no nudity even create new game in single play mode.

Hi, if you are playing single player mode and customized the settings yourself, then you should know the server and admin password you set.
If you forgot those passwords then you have a problem I can’t help you with.

I do believe the Asian region doesn’t have full nudity, just like the USA.
It’s sad that not everyone gets to enjoy the full game.

From what what I’m seeing here there are at least two different nudity issues going on after the 1.08 patch.
My problem was that several of the customized server settings on single player mode were reset to their default settings, this included things like nudity, hunger, thirst, crafting times, day and night cycle times, stamina… and possibly more things that I forgot.

(sadly it doesn’t affect tools though).

Thank you all for your help but the nudity has returned after restarting the game ouf!

Same … equip clothes then unequipped…worked for me

The version number of Asian are the same with EU, and there is no problem to set full nudity before 1.08 or online mode that I think it should be not area version issue.

By version number, I assume you are talking about the patch number righ? If so, then that should not make any difference since we would not be discussing this problem in the first place if you had a different version number of the game.

Anyway, there has been talk on the forum about censorship in Asia, so I assumed it must happening in at least one Asian country if not more, but apparently not where you live.

If my solution to your nudity problem is not working for you, then I suspect that you have the other and more severe bug.
Unfortunately I can’t help you with that bug, it looks like you will just have to wait for the next patch and hope that patch will fix the issue.
I’m sorry that my solution did not work for you and some other people, it certainly worked for me and others.

I appreciate you help. It’s pity there are so many issues to play this game.
I just want to let you know that the version I mean is area version. When you download the game from PSN, you could find this version code in the game page.

Yeah I think it may be a bug. My Thralls that did not have tops on now do but when you open their inventory it shows no clothing equipped in their torso slot and the inventory window of them shows them bare chested.

Another reason I think it may be a bug is the fact that the Thralls equipped to craft stations still have no tops on and it shows them nude.

Quick update! I logged back in as some one mentioned earlier in the thread and it worked. I am on a Official Pve server.

I’ve gone back into settings, console version, and turned nudity off then back on again. 50% of the time it works 100% of the time.