"Player does not have permission for the Apperance item."

( Disabling Mods not possible, but most likely are not cause of the issue either )

reliably does not work for me with any claimed armor transmog 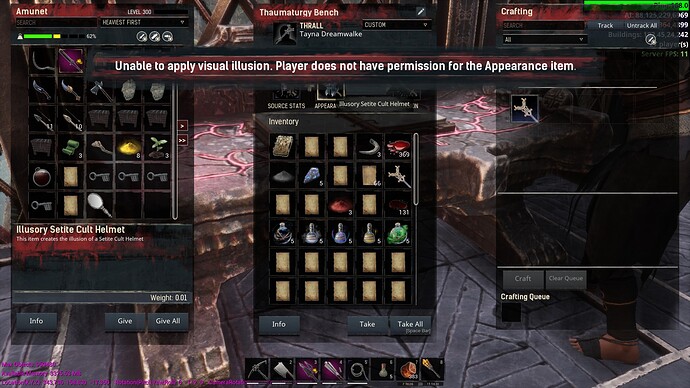 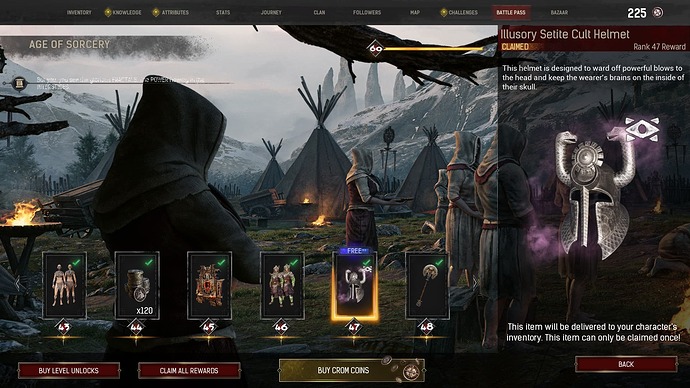 This is a bug that is known that at times the items you should have access to are not linking properly to your time playing…even with the BP showing up. If your knoweldge of esoteric is greyed out when you look at it, it’s not connecting properly and you gotta log off and reset the connections.

Several relogs did not solve the issue, sadly.

I’m getting this too. It does seem to be mod related. On at least one occasion, I loaded with mods on a server that did not support mods. I used the auto-unload mods option, it logged me back in (after restarting the program), but all of my ancestral knowledge that was store bought showed up with the brown (unlearned) background. Logging out, manually unloading all of my mods in the launcher, and reloading, solved the problem…the first time…
Second time, same initial procedure, but a second load in had all the ancestral knowledge bazaar entries with green backgrounds, but “dimmed out” for lack of a better term - the actual graphic for the item in question was much darker, as if some kind of gamma filter had been laid over it or some such - that was on a second load - also, at that time, the bazaar itself wouldn’t load at all, and I did have a curious moment where all of my currently unlocked challenge items went through the entire process of “claiming” all over again…it was super weird