Please, for the love of Gaia, tell us if Golems 4th Age lore #9 is bugged or not

No one has seen it. Dozens of us looking. Please help us. All I want to know is if it’s bugged or not.

It’s bit too early to devs show up so I’ll answer with what @Nirvelle posted yesterday on Discord:

They won’t tell. Particularly not if it IS bugged, because this way Funcom creates hours of “content”…

I’m desperate here.
I feel like Ive dragged my butt across every inch of SF

Well, actually no one said it’s in SF, didn’t they? We have more places to check, like ND or Tower, or hubs. Plus need to be creative, it seems.

true, but it would be weird as heck if EVERY zone had one except SF

As I said, I believe we need to be more creative with that last one lore. Like, think more hard. What do we know? All other lores were around golems, and we have just 2 golems in SF which are close to each other even. Then recall some weird lore locations in ND, like after waiting eggs hatch or in computer, and think more.

I’m finkin’, I’m finkin’…my brain is hurting cause I have been at this for hours
Good advice tho, ty

Is there a list of the rest of the locations anywhere? I’m going to go hunting tonight wherever I can remember seeing golems, but I wouldn’t mind a cheat sheet. 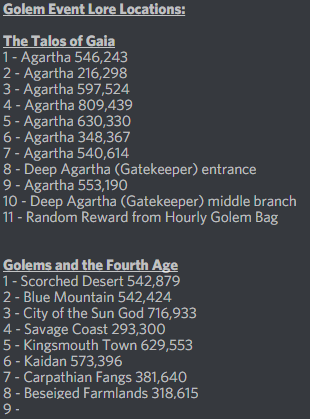 [General] [*Odonoptera|Community]: There’s no betting or over/under going on. We’re just getting a kick out of the controversy

[General] [*Odonoptera|Community]: #9 is the friends you made along the way

Edit: This lore/legend is related to ‘the swarm’?

Getting all the Shems? - not really a spoiler but a suggestion all the same

The devs are on record as saying that this lore will be available year-round. I think it’s unlikely to be dependent on having picked something up during the event as a consequence.

Thats a good point, although its not locked as such just because the event isn’t going, but yeah

I will say the placement of this piece of lore was not clever, not amusing and not fun.

Maybe we were stupid to assume it would be in Shadowy Forest as there was one per zone, why ‘assume’ that, right? Maybe we shouldn’t have thought it would have some connection to golems as the placement of the rest all did.

It just seemed a last minute thought at best.

Thanks to Pinkhair though for locating and sharing it with all of the people that were combing SF for clues and ideas. Hope it entertained the devs.

So what does this location have to do with golems? All other 8 are located near golems. This is in a vampire super soldier camp. It doesn’t make any sense even after reading the contents of the lore (which would be irrelevant anyway because there lore entries were all located elsewhere in TSW). Could someone explain?

Maybe we were stupid to assume it would be in Shadowy Forest as there was one per zone, why ‘assume’ that, right?

That’s the thing, a lot of us stopped assuming it was in SF after checking near the golems in SF. I just started checking every other zone with areas that contain golems. I went to South Africa to check the jumpscare water golem and Berihun’s automaton. I went to Orochi tower because there are a load of golems in there. I went to the damn London Excavation because there’s a custodian at the end of it.

Whenever they release global lore in the future, I’ll keep this in mind.

I suspect the vampire super soldiers are standins for soviet golems as there is a certain lack of them in the open world. Also because it was an unused spot that didn’T have much else in it. But don’t pinpoint me on that. Still haven’t developed mindreading to be a certain source of information.