Poitain Heavy should’ve been Vitality, or Strength IMO. I could’ve also accepted Agility, though it’d be a bit weird.

The medium armor being Encumbrance - an attribute that is literally 100% worthless for thralls - is also a weird choice, but at least I can sort of see it work from a lore PoV, even if it makes zero sense gameplay-wise.

Agree with Mikey, it makes no sense for Poitanian armour to add to accuracy… In lore isn’t Poitain known for it’s chivalry and knights? Not umm archery. If it was Bossonian armour, with their famed archers it would make sense. Str or Vit fits with knights/chivalry best I’d say, again in line with Mikey’s thought. If devs want a hot-weather heavy armour with archery, Poitainian is just the wrong choice, could have added “Bossonian capitain” or such, or a hot-weather variant of Hyrkanian, maybe even Turanian or Pict would at least make more conceptual sense than Poitanian for an archery bias. Actually in Conan lore I am not sure I can think of a worse fit for archery bias than Poitainian… Hope this gets changed actually. Hot-weather archery heavy armour, yes we need - but not in Poitainian skin of all things

The only way that this would make sense to me is if lances dealt some bonus damage which was derived from the wielder’s accuracy.

Bear with me, I’m not necessarily suggesting that they go making changes to the core game in order to make certain dlc items make sense. But would such a feature be a good one? It would certainly add a reason for folks to build accuracy who normally would just ignore it.

The only way that this would make sense to me is if lances dealt some bonus damage which was derived from the wielder’s accuracy.
(snip)
But would such a feature be a good one?

Eh, if the game featured a “chance to hit” parameter somewhere, then sure, maybe there’d be something there. But making the hit is all down to the timing/skill of the player, rather than stats of their character.

The simple fact of the matter is that it’s not lore, or balance, or any kind of thought-out attribute allocation however. It’s just randomly assigned, with some level of preference given to combinations that don’t exist in-game yet. What it looks like, or what makes sense, or what lore suggests is given exactly zero consideration*.

This is not a new issue, and I don’t really know what I’m hoping to achieve here - I can’t imagine Funcom is not aware, they just don’t think it’s a problem. I guess raising the issue once more can’t harm, right?

*for reference, see: entire DLC history of Conan Exiles, the

Yeah, their reasoning for these oddball dlc decisions has never sat well with me, and I know I’m not the only one.

Agree with Mikey, it makes no sense for Poitanian armour to add to accuracy… In lore isn’t Poitain known for it’s chivalry and knights? Not umm archery.

In past DLC, especially with the Turanian, I made a wafer-thin case that Funcom was clearly making a statement about advanced civilizations: desert-based people build temperature-compensating armor to combat their weaknesses.

Similarly, Poitain makes complete sense to me (and not just because I’m happy there’s no Hyrkanian gear at my castles) because this is a culture that would be lacking in Archery, and thus low in ACC. This is the same way I’m outfitting my new followers, to make up for their low points.

All of this bolsters my assertion that Funcom believes certain civs make the armor with the attributes they need, rather than ones that would work well in their regular environment/duty cycle.

In reality it’s moot, structurally of course, because I call them trashcans for a reason. Rigid puffy chest plate with no mail or silks beneath is just crying out for puncture.

I made a wafer-thin case

Man, nano fibres ain’t got nothin’ on this case, it’s so thin!

I have voiced my concerns about the silly assignments of armour stats, usually with regards to temperature. But, the attribute dispersion never made sense either. For a while I was looking for a strength armor to be my everyday wear. Medium armor has no srength armor for warm weather. Heavy armor, at the time, had no strength armor for cold (I think there is one now).

That said, I will echo the sentiment that they really need to take lore and aesthetics into account when making these armor sets.

If it looks like a fur overcoat… cold weather.

If it looks like it barely covers your naughty bits… warm weather.

This seems fairly simple. Of course, I run Fashionist, so this has all become a moot point for me. I wear what I want and look like I want regardless.

Ive field tested Slaver armor in the highlands- only cold or very cold and thats a heat set. Some spots you need to watch out for.

I also eat warming food too when necessary

I hear you about the stats for the Poitan set heavy- i assigned that to my current thrall who is a named archer.

She is kicking ■■■ currently level 11 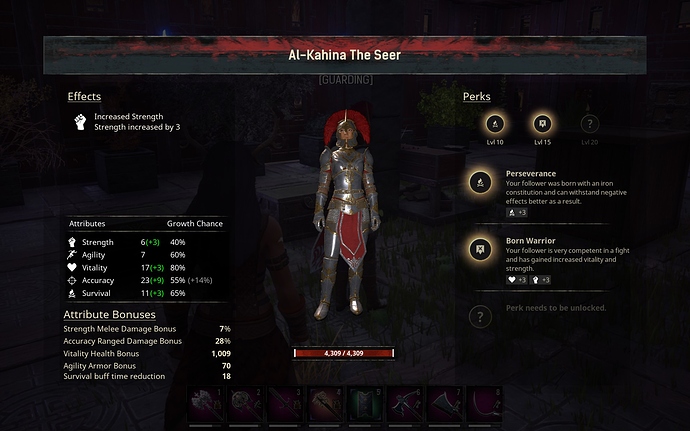 Looking forward to a fashion tab for this game.

I’m guessing because there was only one set of accuracy heavy armor before? I don’t mind it, since now my archer thralls look cool. The Hyrkanian heavy stuff looks weird, like some EOD or snow suit.