Rooby Roo, where are you? 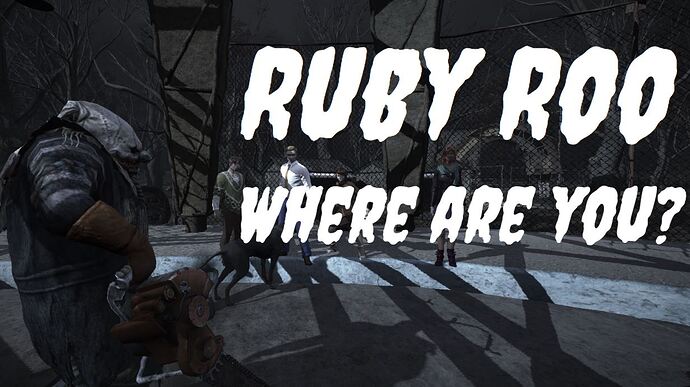 The van drives slowly through the fog and comes to a stop near to a sign, the beam of the headlights shining in the letters that form Atlantic Island Park.

Ruby, the half Great Dane/ half something else appears to share her owner’s concern. “Ruh-uh” 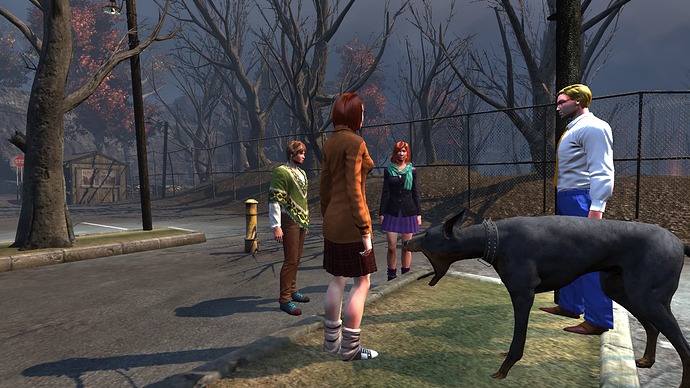 Sandra barely looks up from redoing her lipstick for what seems like the fourteenth time. “Don’t ask me, you’re supposed to be the one with the keen sense of direction.”

Maureen looks across at the others. “Who has the map, anyway?”

[Peter]: “Should’ve just stayed on the couch and watched some zombie flicks… if this thing breaks down, we´re stuck in the middle of nowhere…” Peter grabs a box of dog treats, shakes one out and offers it to the dog.

Ruby’s tongue lolls out and the tossed treat is gone before it completes its arc.

Maureen peers out of the side window. “I knew we should have taken that left turn at Albuquerque…”

Harry looks tense as he drives "We had enough fuel! If someone read the map right we would have been at the party half an hour ago…” Harry frowns at Peter.

[Maureen]: “May as well get out and have a look around, I guess. See if someone around here knows where the party is. Anyone call Jen and ask for directions?”

Harry sighs I’ll check the oil. She may be an old girl but she’s a classic beauty! Nothing beats a VW minivan…”

Maureen steps out of the van and slams the door behind her. She shivers. “Damnit, We were ‘so’ going to win that fancy dress prize this year. So close…So close!”

[Maureen]: “It’s all right for you, Sandra… You and ‘Daphne’ ‘always’ get the attention.”

Harry sighs "Fuel looks good. Oil’s ok… But we are still stuck in the middle of nowhere. Huh… Are you sure we took the right road? It’s been half an hour since we saw a living soul or car.”

[Peter]: “Heh… Oh the horror… Feels like right back in highschool. even the arguing and the getting lost part is on point.”

Maureen peers into the mist. “I think there’s another car over there, I can see headlights. Maybe they know where we are.” Maureen strides off but stops, turning to look at the others. ““Oh sure, Maureen, you got into the fog in a strange town and get killed, we’ll just wait here.””

Harry shrugs "Would be the first sign of life in ages.” 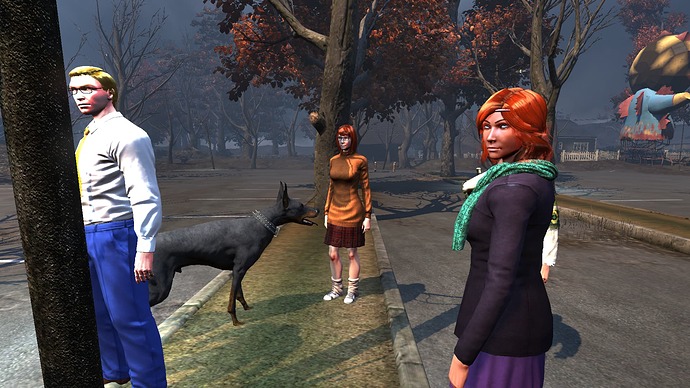 [Harry]: “And what did you use for the authentic looking scooby snacks? I’ve been smelling Bacon and Pacully all this time.”

[Peter]: “Feels like the beginning of a true crime doc…”

[Peter]: “I painted the box and added some bacon to some cookies my brother had left in the kitchen?”

Harry sighs "Are you sure your Bros Cookies are safe? Last time they had edibles inside… 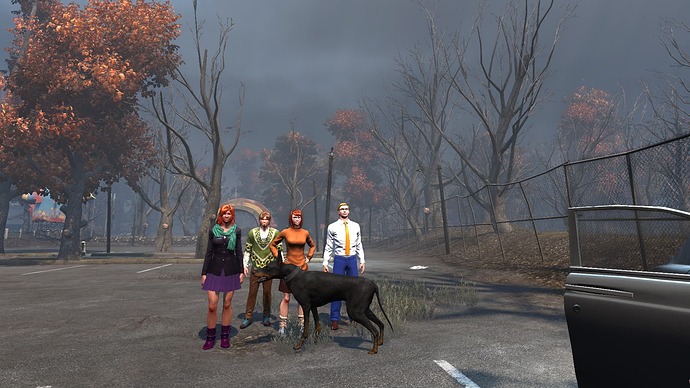 The man stands next to a car, the headlights on, the radio playing static. He goes to take a swig from a hip flask but pauses when he sees the youngsters. He then takes a swig anyway.

[Winter]: “You do realise that you are trespassing on private property?”

Harry looks at the others "We are? We’ve been following their directions.” He looks around. “Are you guys sure we took the right turn?”

[Winter]: “Yep. Didn’t you see the signs? Park’s closed. And will be for the foreseeable.”

[Sandra]: “No kidding? Then why are you standing around there like you’re waiting for somethin’?”

[Winter]: **“Ain’t no party here, I’ll tell you that for nothing. And none of your beeswax, Missy.”

Harry lights a cigarette "Ok… So how do we get to 25 Elm Cresent from here, sir? so we can leave your “private property?”

Maureen turns to the others. “Bit suspicious, don’t you think?”

[Peter]: “Where are we exactly? Can´t remember a park anywhere around our destination…”

[Winter]: “And it sounds like you weren’t raised to respect your elders, Missy.” He swigs again. “I am Nathaniel Winter, this is my land, the park is closed and you have about 5 minutes to clear off.”

From behind Nathaniel Winter, from somewhere in the park there comes a scream.

Winter doesn’t turn around. “I didn’t hear nothing.” He swigs again.

[Sandra]: “The elderly person probably just forgot to turn off the lights when he left.”

[Peter]: “How matching for damn halloween…”

[Maureen]: “No. There’s someone in there and they sound like they’re in trouble. I’m going to find out what.” Maureen storms towards the park’s fence and finds a gap in the chain link. She stops and turns around to the others. “Okay, Maureen, why don’t you go find out what’s wrong and get killed and we’ll just wait here.”"

Rushing into the park, the scream sounds like it is coming from the dodgems. 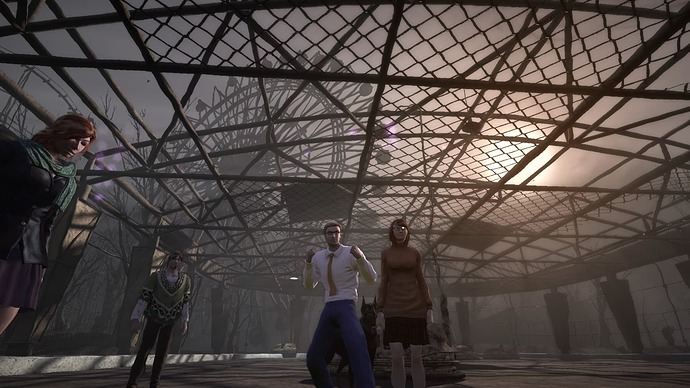 The dodgems are all stationary, but there are sounds that would make you think they were active. Metallic squeals and scuffs with bells ringing upon impact.

Funfair organ music plays and above that the sound of screams.

[Peter]: “The heck? There should not be power here?”

[Peter]: “At least noone dying or being murdered here… But those screams are hella scary…”

At the other end of the stage there is a large figure. It begins to stagger towards them.

Harry raises his hands "Hello? We heard screams. Are you in need of assistance?”

[Maureen]: "“Who’s that? I can’t see properly through these glasses. Is that Mr. Winter?”

The figure gets closer and appears to be dressed in a bulky, dirty clown outfit. 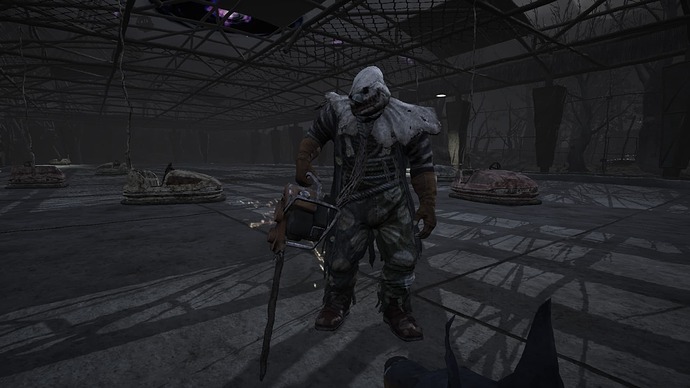 The clown raises a chainsaw and pulls the chain starting the engine.

[Sandra]: “Got to be anime… animatrix… ani… got to be one of those robots, right?”

[Peter]: “Or some psycho who is out of his mind? Do we really want to find out?”

They run. Out of the dodgems, followed by the chainsaw wielding clown. 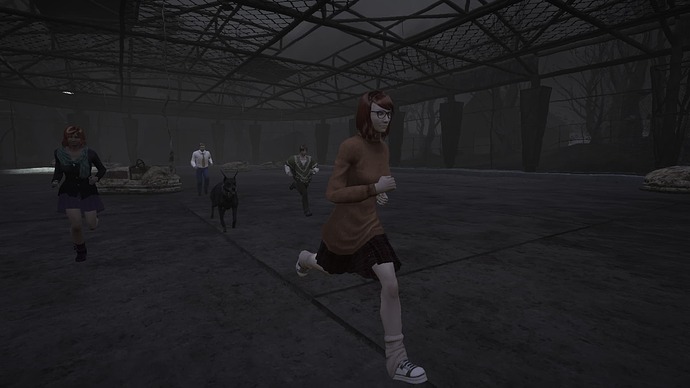 They run. Back into the dodgems, followed by the chainsaw wielding clown.

Harry huffs as he stays in the back barely controlling his fear. "’Abandoned’ my ass! This is a murder trap…!” He looks over his shoulder "That clown’s pretty fast…! F----… F----!

Maureen steps out from behind the shortest clown and looks to where the chainsaw wielding clown ran. “Hmmmm…"

Harry sighs "We should go back to the van get my old man’s gun and try to call the police again… And Gee-Tee-eff-Oh?”

[Maureen]: “Yes, yes we should…” Maureen peers into the shed they sheltered nearby. This looks like an office."

[Peter]: “Sure… It is the damn halloween night… like who would believe this…”

Maureen looks over the papers. “Guys, we have a chainsaw wielding clown running about. He’s going to get someone hurt.”

[Peter]: “Anyone got reception? Damn, that just scared the living shit out of me, I sooo need a drink…”

[Maureen]: “We’re going to need to trap it!” Maureen smiles.

[Peter]: “Have you lost your mind? How are we going to achieve that without ending up as mincemeat?”

[Sandra]: “Well. someone will just have to play bait.”

[Maureen]: “I’ve got a plan… And I am going to need a couple of volunteers…”

Ruby looks up at Peter.

Peter sighs and gives the dog a treat. “Was nice knowing you, partner…”

A little time later, the clown wanders around looking for something. It comes up short upon seeing Peter dressed in a pale blue dress holding a giant lollipop. Inexplicably, there is a large dog sitting next to him in pretty much the same costume.

The clown gives an audible “Huh?” before starting up the chainsaw and starting to run towards Peter. 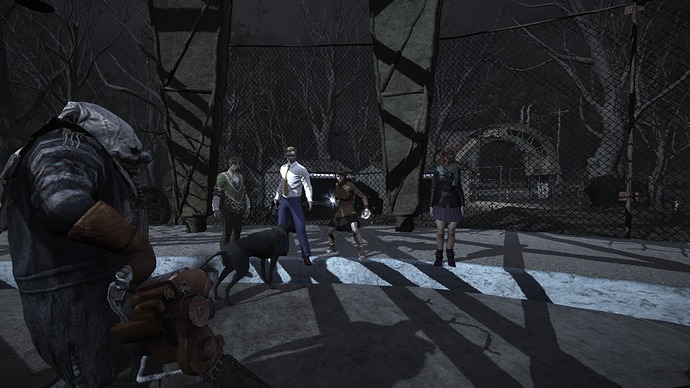 [Peter]: “ZOINKS! If this thing kills me, I´ll come back to haunt you as a damn ghost…” He starts running towards the duck pond. With the dog in the blue dress in slow pursuit. And a chainsaw wielding clown in fast pursuit.

Harry sighs "Never knew Peter can run so well in heels. Guess High School did teach him how to go places in life?”

Cursing, Peter runs through the pond. “I hate all of you!”

Maureen looks to the distance. “Here comes Petey! Get ready!”

The clown is close and follows into the pond.

Harry makes ready to let the rope go. "On your mark …”

The net falls to the ground from the nearby crane, landing over the clown, but also over Peter.

Harry sighs "Well it worked… Kind of… Your plan.”

[Peter]: “Oh ZOI- F—!” Peter tries to create distance between him and the clown.

The more they both struggle, the more they get entangled. The clown struggles and growls, particularly towards Peter.

Harry aims the handgun. "Good that I have a backup… Not sure this trap will stop him but… A 45 ACP might do it.”

The clown stops his struggles and despite the mask with a fixed grin, looks rather downbeat.

Harry sighs "Citizen’s arrest. I never thought we would be ever making one…”

[Peter]: “Yeah… this is soo funny…” Peter tries to calm his breathing.

Sandra grab’s the clown’s head and gives it a good pull.

The mask comes off to reveal Nathaniel Winter’s sweaty head.

Harry shrugs confused and raises an eyebrow. "Huh… It’s the Mister Winters we talked to!”

[Maureen]: “You see Nathaniel Winter has an insurance contract on the park, one that after 5 years of no visitors will trigger a premium that will give Mr WInter 10 million dollars and twice that in real estate. And today was going to be the last day, wan’t it, Mr Winter?”

[Winter]: “Sunuhrusuhfrasuh- - - I would have got away with it too, if it wasn’t for you meddling kids.”

[Harry]: “Wait… did you plan this?” He stares at Maureen.

Winter sneers up at them "You forgot one thing though, smartasses, "

Harry looks around with his gun trained. "I have a bad feeling about this…”

[Winter]: “Nathaniel Winter died 5 years ago.” He reaches to the top of his head and tugs, pulling a face mask off and revealing a bare skull with coals of red light in the eye sockets.

There is the sound of four screams and a dog’s howling. 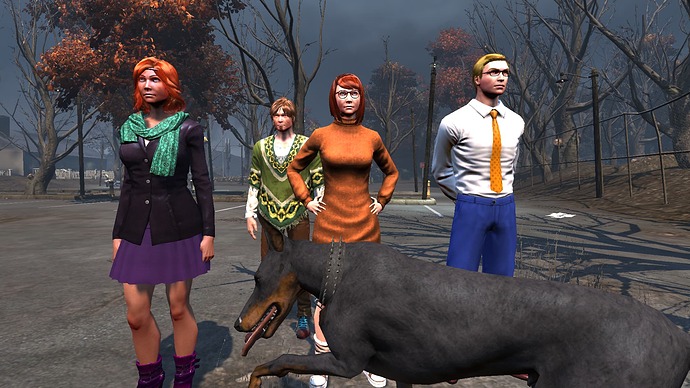 With a lot of thanks to everyone who participated in this!

Ruby Roo - Where are you? was a one-off RP and is part of the roleplaying group based around, but not exclusive to The Devil’s Due bunch. We RP Tuesdays, Fridays, Saturdays, and Sundays.

Saturday night is “Alternative Night” where we explore times and spaces not within the original game and go from Victorian times to Swinging sixties. From Moonbases to Deep Sea bases. From other realities to FutureShocks.

If you are interested in taking part, please contact me here or on Discord (Deodand
#8127). The plots can sometimes last a while but please don’ts let that put you off - we can always find a way to involve people and have had many come for one session and add a lot to it, as well as those who stay for the entirety