Spirits that are not Spirits

I thought while killing Familiars for the Kill acheevo, I could also kill the spirits that hang out with them.
Turns out that isn’t the case because they don’t count as Spirits for the acheevo, Despite the Agent Switcher saying they are “Spirits” 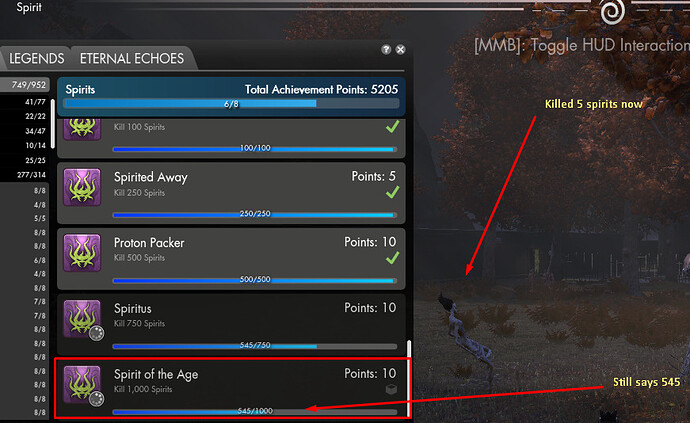 Is this some misattribution on the Agent Switcher? The Agent thinks they are Spirits, so is the Agent wrong or is the Species label wrong?

I thought those count as spectres in your bottom image. If you are still there hunting, maybe check that counter if you didn’t already max it out?

Spirits are like the flames-spirits in Egypt or the green coloured ones near Jacks Tree in KM, or by the scarecrows in SC.

I did not realise that the Class of '67 Eidolon counted as a spirit.

You’re confusing the combat categories that match the agents’ types, and the mob names required for the museum.

Try to use your example with “Wendigo” - there’s wendigos to kill for the museum, but is there a “Wendigo” category in the AgentSwitcher? No! These are different things. Wendigos match to “supernatural” afaik when it comes to combat mob categories.

As far as to why some mobs don’t count for kills while others do, i guess it’s either because that would be too easy, or it is to prevent some exploits, or just a bug.

Ok, So it turns out they are spectres. @Katelin
I checked on an alt that didn’t have the Spectre mob already maxed.
The Agent chosen is Spirit Agent.
The Scorched Desert Flame Spirits ARE spirits
The chosen Agent is Spirit Agent.
This is where I was confused since a Spirit agent leads you to believe they are spirits,

(my bad lol) which they are by species, but not by mob name as it suggests. Thank you @Szalord

I don’t have the Supernatural Agent so I assume these will be counted as such like the Wendigo etc.

Sometimes this game makes me have spaghetti for brains.

The Ghostlights by the scarecrows in SC are also not Spirits

Ah yeah, sorry my bad - those are wisps.

the rare wisp spawn there however is not a wisp