The unique Cimmerian deity is Crom and he is a “atheistic” option. Morrigan in other hands, is a Cimmerian deity who should be added. As she is little explored in most games.

The Morrígan ("phantom queen") is a figure from Celtic Mythology who appears to have been considered a goddess, although she is not explicitly referred to as such in the texts. The Morrígan is a goddess of battle, strife, and sovereignty. She...

Now about thaumaturgy, i hve suggested necromancy and demonology ( Demonology & Necromancy on Conan Exiles ) And have another suggestion of a type of magic more original. Thaumaturgy.

“(…) The wizards of Acheron practiced foul necromancy, thaumaturgy of the most evil kind, grisly magic taught them by devils.” – Robert E. Howard: “Hour of the Dragon”
https://hyboria.xoth.net/gazetteer/acheron.htm

So, the player shoud be able to use thaumaturgy to for example :

Note that there are already animated rocks on CE, example? Rocknose King ( https://conanexiles.gamepedia.com/Rocknose_King ) 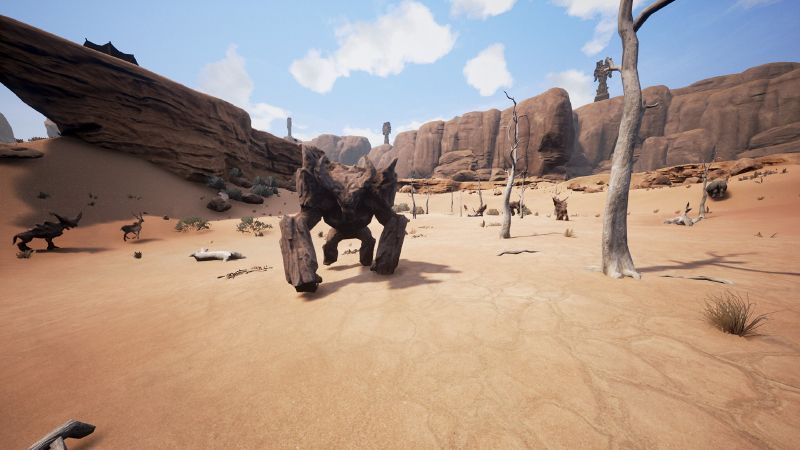 Some rules to Thaumaturgy that i wanna suggest :

id like to add here is that in order to create a golem they need the head of the beast as well as 200 brimstone and 1 steelfire. I was gonna say a core of a magic item but i do not know if such item exist.

I would think brimstone and several alchemical base with the head would do the trick.

Or perhaps corruption? Any better idea?

While there are more deities in the cimmerian pantheon than just Crom,none of them seem to be actively worshipped. Their names appear to be used only when swearing an oath or as curses, as cimmerians dread their gods’ attention and don’t seek it like most other people.
Crom is not really the atheist option, he, along with the other cimmerian deities, is merely indifferent (at best) towards mortals and doesn’t listen to prayers. The cimmerian way of “honoring/worshipping” their gods is to make use of what is granted to them at birth, i.e. the will to live, fight and to survive.

Therefore having a second option for cimmerians wouldn’t make sense.

Corrupted stones. already in game only used for one thing (maproom).

Requiring demon blood which can be closely associated with “magic/sorcery”

I would use that and the head maybe some alchemy base.

You are right, Honestly, i only suggested Morrigan since i don’t know any deity on conan universe who fits better a thaumaturgy.

Remember that magic is a “outsider” force in conan universe.

Remember that magic is a “outsider” force in conan universe.

Perhaps “Taming” the sandstorm to come when we call it would be another option… (Not that the sandstorm wouldn’t still hurt us and our allies if we aren’t in shelter or a sandstorm mask when it arrives, but it would still be kind of neat if we could at least rile it up good with an attempt to control it, causing the sandstorm to simply show up and do the usual sandstorm thing…)

Protect your base with a hailstorm sounds epic. I agree. But it fits better the WHITE HAND magic than a Thaumaturgy ( http://www.marvunapp.com/Appendix/louhihyb.htm )

If you ever watched the movies, remember the voodoo guy who put the paint on conan O_o, not so outside at that point.