Today we have 2-3 active PvP servers, so I thought, it was a good time to say goodbye, Conan Exiles, thank you for everything!

I really enjoyed a lot of you, maybe I even felt at home. I met new friends and strengthened my bond with others.
I had so many different and new experiences with you, I can’t even count them.

It is a shame, that you got infected by cheaters and by people of a destructive mindset. It hurts me, that they did what they did only to see you perish. And now, since your time has come, I feel sorry, that Funcom, your father, decided to let you go.

Rest in peace, Conan Exiles, you shall never be forgotten.

You wrote that very well. Unfortunately, I have to agree that there are players on our PvP server who want to destroy the conan exile. Too bad that nobody really cares, otherwise the game would be really good.

Wait are you saying goodbye to the game because you are leaving, or that you only see 2-3 active servers, so the game died? Because, even though low, i think there are more than enough people still playing on all platforms, that it is not dead.

Might not be dead, but it’s bleeding out and twitching on Steam. The average number of players according to Steam Charts in the last 30 days is 4,791 players and has been dropping for the last 4 months. I’m only seeing 4-5 players in each of a few servers on PC right now on PvP and PvE. A lot of those are password protected private servers. The rest are empty.
Maybe a better solution would be for Funcom to get the game squared away so perhaps some players would return before it does completely die.

Actually the game has been relatively holding at the 4500-5000 non spikes going back to release in May 2018. Is the population sparse , yes. The trend with this game is there are spikes around DLC and patches, then a return to “norm”. Which seems to be, on PC at least, around 4500-5000 base. I think most of the left over gamers are non combative by nature, and we are seeing a lot of smaller communities just playing for the building aspect, and some PVE. The PVP side is slowly deteriorating, and now we are at the niche gamer levels. A majority of the “top” games on Steam are competitive style games. So with Conan slowly going away from the PVP raid mechanic in favor of building and PVE servers with no consequences (not judging, but stating fact, the battle flag is for fighting with no risk of losing anything but your pride.), thus the competitve gamers are moving on or back to other games.

Well, that would really depend on the time of day you do your research.

I used to play on the Thrall Wars server and still has it in my favorites, so I notice that for the past month the server has lain steadily on 65-70 players in the EU evenings. According to topconanexiles it is rated 3rd, populationwise

Myself, I play with a group of friends that are active 2-4 hours each day, and outside that period, server stands empty.

Is there room for more players in this game? Definitely!

Can someone create an account called ‘Conan Exiles’ so that they can reply to these posts and give the desired attention? Or maybe we can just have a running thread that people can add their username to, since none of them ever say anything new.

I enjoy pvp Servers very much, although i am not a hard PvP Player, mostly doing some open pvp every now and then. Compared to PvE Servers i prefer pvp, because there are not so many buildings all over the map. PvE and PvE-C Servers are flooded with buildings alas. Lately there are glitchers and griefers, who make playing on PvP servers rather uninteresting. These People are aware, that they destroy the game, but they don`t care. If Conan is dead, there will be another game to kill. It would really be nice, if Fun Com could be faster removing those glitches, like, for example, grasping through walls and stealing out of a thrall wheel.

Sounds like maybe time of day and location. Given the choice, most people in the US won’t join a EU or UK server because of ping and lag. The game’s twitchy enough without having to deal with internet lag.

The trend with this game is there are spikes around DLC and patches, then a return to “norm”.

I don’t necessarily disagree with anything you’re saying. I believe it goes without saying that the trend of low player numbers is largely due to the game still playing like it’s in early access and loaded with bugs fifteen months after official release. Otherwise, I think we’d be seeing drastically higher numbers of players especially in light of how many copies of the game sold.

People just aren’t that interested in playing a broken game and the ones hanging on love it so much they’re hoping against hope that Funcom straightens it out. I can’t imagine anyone being completely satisfied with it’s current condition.

The exploits and cheats I totally agree with you.

Bugs barely being an issue?..well…I don’t think I can agree with you on that point at all. Especially since my game has crashed more since the last update/patch than ever before. Then there’s constantly dealing with teleporting NPC’s, NPC’s falling through the ground, and stuff like this screeny my friend took last night. 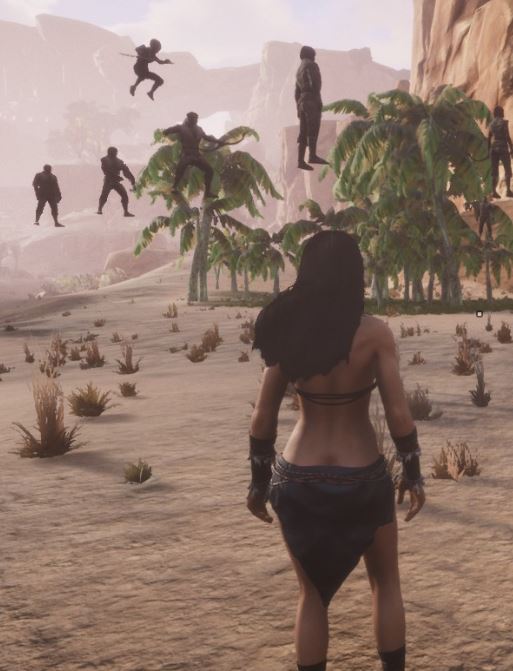 Given the choice, there is the US server Nethermoon, pop 69/70 at this very moment

Strange. I have seen none of that on our server despite some recent decay. One chap’s cheese wheel decayed and the thralls are all grounded, ready to harass passers. That’s one I saw last night. His building was placed in the world after say, July, and I know in the Bugs section there is some correlation with older buildings/thralls being at issue in a floating case such as your posted screengrab. Potentially pre-May, 2019. Could that be the case here?

Im right there with you, uninstalled CE and moving on. Good luck to all exiles.

Your guess is as good as mine.

I leave after a while and then come back, a pattern that’s been repeating since it went live in early access.

I love the game but there’s simply nothing to hold my interest once comfortably established at 60. After a few raids, few fights etc, i just get bored. The game badly needs something more - more population per server for one, they always feel empty even with 40 online (which is a rarity these days anyway).

There needs to be a game mechanic or incentive to keep people playing. They’ve done pretty good by adding things like pets, the unnamed city revamp, various other things, but none of these have addressed the bigger issue that people simply tire of the game because other than raiding and building, there’s nothing more to do. Once you’ve done plenty of both, it’s zzzz.

Beat’s me what the answer is.

Personally I think the game could be better if you had to choose a class from character creation each with mostly a common tech tree, but also some special tech for each class that you can only craft being the right class or trade with other players or buy from npc traders… More rpg style.

I would love to see trading being an actual thing, I know there are a few things that you only can craft by finding the right recipe, but I think the biggest problem is that you from 1 character creation can craft every single craftable item in the game which kind of kills the trading aspect

I said the following in another topic. And i guess alot of people here agree that there is no incentive to play after you reach 60 or even before that.

Will you address the rampant cheating, or not? We want to know

I made a huge break from the game, and just logged to see what’s new. Combat animations and pretty much that’s it. I see no incentive to play the game. AI is still broken, foundations disappear, apparently there are still glitchers that can pass trough walls. In other words NOTHING new.

Not many people play the game because people are let down by the game. They see this cool aspect of Howard’s world, but when they start playing they see how dull it can be. Over a million copies are sold yet CE keeps falling down from the charts. There is a reason for that. The game is DULL, combat is clunky, AI is still not working well, and all of the old problems plaguing the game are still here. Sure SOME progress has been made but not enough.

Which raises the question, how many people at FC are fixing the game and adding new features like MECHANICS not cosmetics. It’s been years now since EA, and not much is to be shown.

The world is there, there are some animals and NPCs but the whole feel of the world is just lifeless. Everything sits in place or move just a few steps from their spawn location and that’s it, not life and no incentive to play be it MP or SP. Pure boredom, CE has the looks but it lacks in the living,breathing world element, and right now i guess the majority of people that play the game are just here for the looks.

I have said it in the past look how Skyrim and Witcher 3 make their worlds feel alive, look at their combat it FEEELS GOOD, yes they are different from each other but they feel good, here not so much. And again it’s been more than 2 years and the game still feels like it’s in BETA. Take notes from the other survival games like ARK and Rust, they are owning in the charts right now

It’s not just Solo or MP it’s the whole functionality of the game. Sure you can make a castle then attack it, but you know that the NPCs you placed inside will probably just stare at you or you might witness half the foundations missing. It’s the whole feeling of the combat, AI and explorations that are lackluster even the UI is terrible it screams “The game is in BETA”.

The only good thing that i can say is that the game is indeed beautiful, but beauty alone won’t do it.