Thrall dies in lava for no reason

this s*** prevents me since years from supporting the game by buying any DLC because such bad gamedesign does not deserve support
I fall into lava and climb out while my thrall is dieing jumping afer me because it takes too long to climb out.

First for a long time thralls died instant in lava, now they still die because of glitch and bad mechanic/design while it ■■■■■■ the player even more off because leveled up thralls have a 20 times higher value for the player , why is lava damaging thralls at all?
Logic? Do you speak it FunCom ?

userstory for possible solution:
As a player i want my thrall to not take any damage at all in lava streams in the volcano.
Reason: The AI on thralls is not good enough to avoid lava streams

If only someone had predicted all these posts before the patch…

Well I can only agree with the OP. Most of us have learned by now that taking a Thrall into the Volcano is a death sentence more often than not, but not taking a thrall inside is a workaround not a solution.

I always use my thrall at volcano… Even my level20 ones.

My big question is: Why are you guys always off road? Why do you climb anywhere? What is your goal?

I can clear most of the volcano and my thrall never touches any lava.

Its a different case running to the well of Skelos. I usually use the way from Dragonmouth, but I also connected this passage to the normal volcano area.
Running down works most of the time. Thrall never touches lava…

But running back is really strange… Losing >4k health is kinda normal. But I just run fast there and only stop at safe places and heal my thrall.

I can clear most of the volcano and my thrall never touches any lava.

Damn I wish I was such a lucky boy than you , life isnt fair…

You’re essentially just getting lucky lol. Ive spent hundreds of hours in the volcano and every time I decide to trust a hope, my thrall teleports to a random patch of lava and dies.

Maybe it is time to think about how you treat your thralls, if they will go suicide at the first chance they have to escape your rulership

I have noticed that if i stick to the bricked paths and main areas, the thrall follows fine. It is when i Off-road, the thrall likes to drop it like its hot. The other no-no is if you are built really close to lava, then have it stop in a safe space, pick it up and place it where you want. Remember, thralls are that smart because of the traumatic brain damage we gave them capturing them.

The thing is: If you are kinda off-road, then yes, it will often teleport to strange places. And sometimes lava…

But I just port to the obo, kill the shrine people and make a big round and kill/enslave everyone.

Sometimes I go the green way to refresh my buildings connecting the well of skelos. 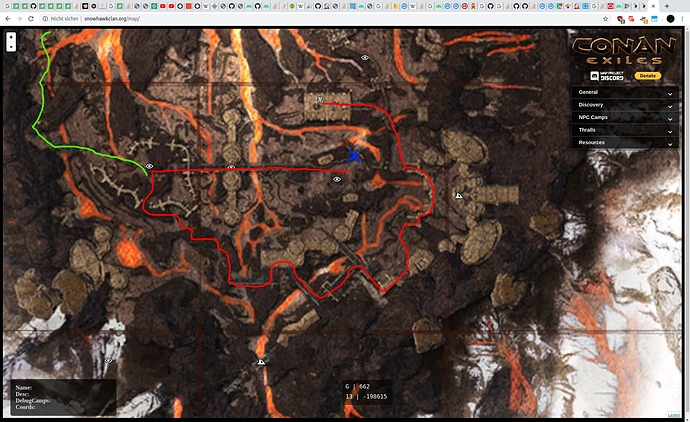 I will check at home again if it is the correct way how I run all the time.

PS.: Just for info - I have 60-80 Eriis. 40 Kisthis. >12 Dacias, >10 Spinas, 3 or 4 Anos and several Vais. Tma and Hosth also >10 times.
And every other working thrall from the volcano. Besides the cook and dancer even several times and most of them are still in chests.
Besides the first 20 Erris I always used a thrall. Back then lava was one-shooting and as the thrall sometimes touches the lava, it was way to risky back then.

PPS.: The blue cross is my outpost in the gas-fields.

That is basically my area as well. Sometimes i have to altar because of PVP blocked areas, but this is the best way. And when i cross bridges over lava, i will pause to let the thrall get right behind me and aligned with a straight run. And don;t let those obsidain nodes entice you to look for gold lol. Those seem to be in places by lava just to kill your thrall

And don;t let those obsidain nodes entice you to look for gold lol. Those seem to be in places by lava just to kill your thrall

Yeah, Obsidian or Lotus farming is probably bad with a thrall… Or lets say, when the things are off-road or you even have to climb there.
Many Obsidian nodes which are near the Shrine of the Oracle are thrall safe.

theres no safe way to get them back other than leaving them somewhere to teleport home, or picking up/placing them all the way back.

Run the strange way up to the exit of Dragonmouth.

Yes, they will lose some health. But if it has >4k it should be safe, except you decided to stop half way to look at lava

Or build a bridge if you have a base there anyway or how do you get to your base? Well of Skelos isnt really reachable from the volcano obelisk, without adding some bridges.

The problem is when i get down there, it takes a long time to move far enough to trigger the teleport, so they just cook

Or FC could fix that issue… Why does it have to port sometimes? Why does the thrall suddenly decides to not follow you, but stands around.

I am against that for PvP players

So that people who are brave enough to build something there, are harder to attack with thralls because of the lava. And I never played PvP in that game.

I do not get why anyone anyone would defend that it is ok that thralls die in lava or walk off a mountain or fall to their death on a elevator. That is bottom line bad thrall AI and pathing. It has needed fixed forever and defending it just makes Funcom think some of you all are ok with losing your thralls to bull crap so it does not get fixed

This need fixed, stop giving work arounds, I mean please there are a hundred posts on how to baby your thrall though dangerous places, stop defending why it does not get fixed, there is no good reason for them not to fix it and keep asking for it to be fixed.

Stop suggesting no one should take their thralls to dangerous places, its the reason for thralls, to follow and protect. Stop with all the excuses and just keep asking for a fix.

Funcom please fix this it it just so wrong that after all this time people are still losing thralls to fall and lava damage. We work hard for to level some of these thralls and to lose one is frustrating but to something that should not even happen is more then frustrating.

Yes, the strange path mechnasim should be fixed. With that all your 3 “problems” would be gone. No need to remove lava dmg.

Maybe thrall restriction in this aera is part of the dificulty, tho i agree we need a better A.I for them

Why thralls die in lava? Man that is a logic question!!!
Maybe u should check google about pompei …
It is refreshing that in thrall exiles there is ONE biome which is unforgiving even to thralls…
Learn maybe where u can take a thrall or not…
Oh god u made my day!!! Why anything dies on lava??? LAVA!!! XD one of the best questions i have ever read…

Why thralls die in lava? Man that is a logic question!!!

Do thralls have to jump into lava just because its so nice in there ?
Do mitgets have headlights ? (hint: night vision potion and powder)

He aint that wrong… Lava should kill you.

But I am also at your side: The thrall shouldnt die, when you are not even close to lava.

As I said before, the real fix, would be fixing the thrall pathing AI.

But I know at least 2 stairs at the volcano, where the thrall does not run or any enemy… They will just stand at top of the stairs. You can hit them with 1-2 combo and roll out of their reach. Then wait for them to un-equip the weapon and combo again…
I often used that to kill them, when I was fresh lvl60

So often its not even the thrall path AI fault, but the environment. Why is no one able, besides a player, to run on some stairs?