I created an account to report my experience with the new thrall system in 3.0.

I don’t think thrall updates should be included in the 3.0 release until it receives a worthy overhaul.
The nerf to the thralls isn’t the issue, the issue is the authority skill tree, I tested different ways of playing, different bosses, and found out that my thralls have higher chance of surviving a boss fight WITHOUT the authority perk than if I had the tree active to max attributes.
I tested the executioner just north of noob river with and without the authority tree, here’s what I got
I had Enika of Cimmeria, without authority, she had around 3.1k HP, with authority, she had over 4k hp.

Without authority fight:
I entered the dungeon, started clearing out skeletons while the boss got aggro on me. After surviving and clearing the room I was able to focus on the boss and by then, Enika had over 2.5k hp.
I blocked and countered with my sword every time, until my stamina ran low, I’d wiggle around until I could afford to block and counter again, kept doing that until my health recovery perk kicked in, then I would retreat, fully heal again so that I could reactivate the perk while Enika kept aggro for a second, then I returned and the cycle repeats until we finished.
By the end of the fight, Enika walked out with over 1.4K HP out of 3.1K

Now, that same fight but with Authority perks that buff up my thrall to max.
We cleared out the cave, same as usual
but the boss would completely focus on Enika this time, the only damage I received was because I got in the way of its attacks. I kept hitting the boss to make sure Enika wouldn’t lose HP but the recovery she gets from me attacking the boss was very low to make a difference (maybe I couldn’t notice anything significant? I was using sword and shield)
At this point I’m only attacking the boss to make sure whatever health Enika can recover will help her stay alive longer. The boss NEVER tried to attack me after Enika had his attention.
By the end of the fight, Enika made it out with 700hp out of 4k. The fight was the most boring battle I’d ever seen, considering I could just stand back and watch my thrall do the heavy lifting and the only thing keeping me engaged was thinking my attacks would somehow heal my thrall enough to keep them alive (and I’m not sure if attacking or not would’ve made that much of a difference)

So far this game has absolutely no way to “taunt” an enemy, I didn’t mind it back then, it does bother me now a lot more BECAUSE the taunt perk from authority is the FIRST unlockable perk, AND IT’S MANDATORY, it’s not an optional perk, so you CAN’T buff your thralls without giving them the taunt perk which makes boss fights dull and boring. Not only that, but because of that perk, thralls have significantly less chance of surviving than without the entire authority skill tree.

I think that taunt perk should be optional, make the first perk 2 choices, irrtate, which is what it is, and taunt, which makes enemies focus more on the player than the thralls.
But if that’s too much work, then swap out healthy diet as the first perk, and irritate should be the optional along with commanding presence, otherwise that taunt perk will make things worse both in terms of thrall survivability, and in terms of gameplay engagement.

I’d be ok with that perk if the player had any way of taunting an enemy, like using emotes in combat or something of the sorts, otherwise, I think it should be completely removed or made an optional.

So in order to prevent thralls from taunting you need to sunbathe in corruption and gather soul essences enough to corrupt the first perk and then sped the rest of the game with light permanent corruption…
It doesn’t seem right.

Well, corruption is a big power boost. You sacrifice a bit of your own effectiveness to make them more effective. You don’t have to, but the reward is well worth the cost

the problem I have is not about power, it’s about gameplay experience, either your thrall always taunts and has aggro (update: I tested stronger weapons, the boss will turn to attack you once before attacking the thrall again).
I’m ok with using corruption for more powerful boosts, that’s perfectly fine, I’m not fine with NEEDING corruption to get rid of a perk that drastically changes gameplay engagement. It’s not good user experience, it’s not good roleplay either.
The first perk should be something passive, and I think the healthy diet perk would be ideal for the first perk, it doesn’t change gameplay whatsoever, it just makes thralls recover easier outside of combat, THEN you can choose if you want your thrall to always have aggro, or if you want them to recover when you deal damage, after all, they will STILL get attacked occasionally, and the small amount of health recovery is more effective when your thrall has a chance to breathe while the boss focuses on you.
The first corrupted perk is nice and all, but needing corruption to get rid of a gameplay element is not ideal, especially if it forces you to slightly alter your character’s appearance with light corruption. Breaking immersion and roleplaying value for the sake of bypassing a gameplay aspect isn’t right at all.

Just a heads up, you can head into the behavior section of your current follower and disable the irritate perk. 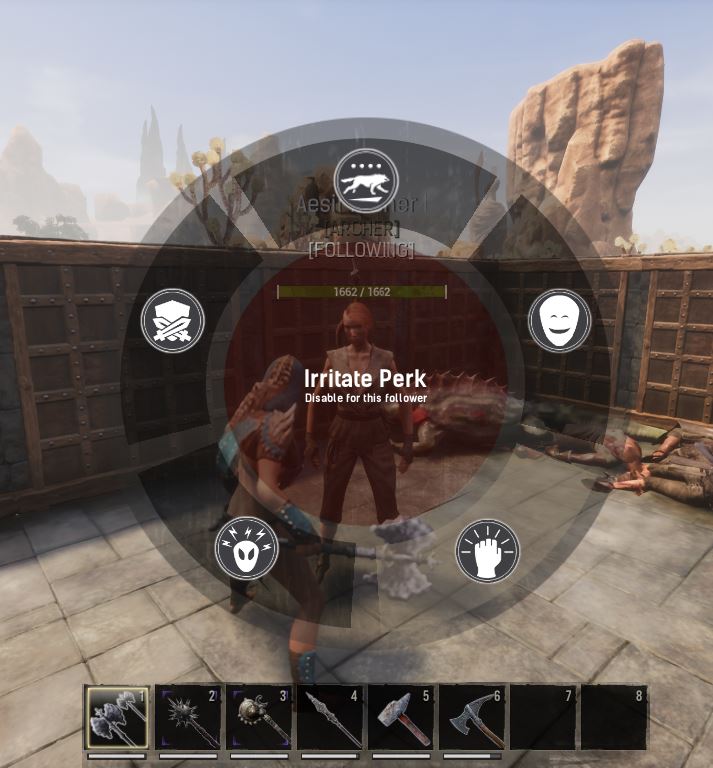 Works nice if you’re using an archer or something

Many thanks for posting this!

aaah, now THAT’S something I should’ve been aware of before posting this, I didn’t know it already was an option, my bad.
That said, now I really wish there was a way I could taunt, especially if I’m playing co-op with my brother, but I guess that’s a discussion for another topic/thread.
Thanks!