As per the recap, authority affects only your active followers meaning the ones you have on follow: 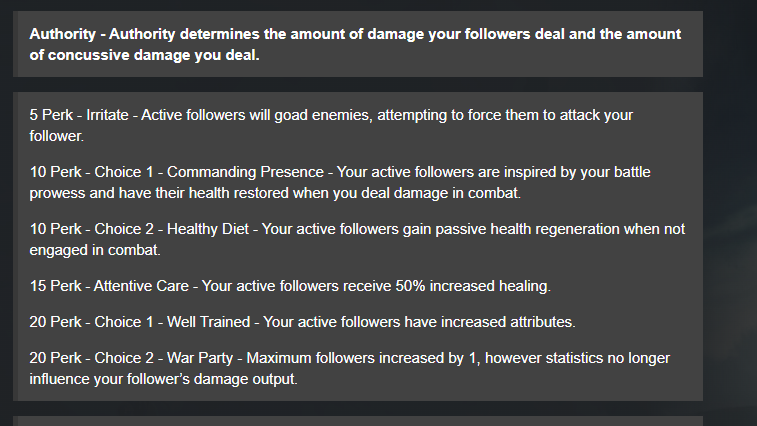 Your guarding thralls will be nerfed with no option to make them better.

not sure how i feel about the nerfing of guarding thralls defending will become considerable harder.

I’m wondering if they will turn on DBD because they are nerfing building defenses on all sides.

But good news is that undead fortress of stable animations doesn’t seem that bad if the nerf to thralls is as huge as they make it seem.

Pets are not getting nerfed but I feel that way thralls never really protected any ways.

I agree the thrall nerf is a double edged sword. On the one side it would lessen the dependence of thralls out and about, which is a good thing. However it would greatly reduce the effectiveness of base defense for those away from base or offline, which is bad and will be substantially exploited.

However a balance of this could be buildable autonomous defense structures for instance wall mounted ballista’s that require an unplaced fighter thrall to craft. Or something similar that would work like an auto turret. So that the base could more or less defend itself albeit not as good as its owners being present but better than thralls alone.

Have thralls really stopped any off line raid most time they glitched out. Or just be picked off from afar away

I asked this in a reply to @den. No response. He said they will monitor how it affects pvp (all the changes of 3.0) and will adjust if necessary or possible. I basically stated just 1 day of offininng with a new advantage is too much. We will see. B

I have beaten the drum of 3.0 being a pve update so much, i grow tired now. I have accepted CE is a base pve game with minimal pvp (raid) thought, just wish FC would just come clean on that.

True, but at least they slowed it down and made it a pain if you built right. The problem.is they have basically nerfed out all possible offline defenses to where you are better off packing up your body every night and trying to hide it in graphical glitches ( where mesh and the textures dont quite match up) while offline.

Problem with ai is not hp or damage it more tie into response.

You have major problems is performance issue, where ai can’t target anything just sits there.

Then range trebs or you range archers, so ai have shorter range. W hitch means they get picked off. Or say creat whole and just wait for pvp to end.

Now the 10 perk makes arrows faster if this is applied archers and make equal range as player.

Or make fog of war that forces you to be in ai range.

Then make ai attack players outside of pvp which also make unkillable.

Where did you find this picture and is there one for all of the other perks?

I don’t play PvP anymore, so nothing I am about to say has anything to do with it.

When the thrall leveling system was introduced, the rationale was better, more capable thralls. It takes time to level them, so you get attached to certain ones because you spend time running around with them. Fair enough. Mission accomplished. We also eventually got limits. Fair enough. We’d spent time getting them built up to defend during a purge. That is their function in PvE.

Before, a single thrall that was one of the better ones couldn’t take out a boss on his own. He needed you in the fight. Right now, leveled up tough fighters don’t need your help, except in a few cases.

So, if I a hearing the livestream correctly, and, let’s face it, that was a poorly explained livestream that created more questions that it answered, thralls are going to be weak to the point of…what exactly? Are the bosses that take us out with a couple of hits getting nerfed too?

Purges where multiple enemies come from multiple directions are difficult when you are alone. What happens when thralls can’t help? Do you just lose the build?

More information is needed. Nothing said in the livestream made any sense in this regard. If my thralls are just going to be eliminated every purge, there really is no point to them. I spent a lot of time leveling them all to 20. I’m not real big on wasting time creating cannon fodder that has to be replaced. We could have kept the old system for that.

I don’t think the intention is to make thralls useless, or die to a stiff breeze. Then again, balancing them properly seems to be difficult, based on what we’ve seen so far.

Currently, if you dress a fully-leveled thrall in heavy armor, you can send them against a world boss and barely see their health go down a dent if you give them any food. Surely there is room for some reduction in their hitpoints and retain their usefulness.

I’ve leveled up an Exile Fighter I to level 20, given her decent equipment, and taken her to fight every world boss in the Exiled Lands. I needed to help her, but wasn’t really in any danger of losing her. And that was the puniest possible thrall in the game. So I’m sure we can afford to lose some power from our Lians and Beastmaster Teimoses without fear of losing them against a hyena.

But even IF he is in danger of losing her it is still THE worst fighter you can find out there. IDK why you want to balance the game around the worst fighters or think funcom is going to do that. Obviously your freaking fighters 1-3 are not a problem and no one complains about them. Hell in pvp fights they probably gonna tickle you, if even. But its about the various named fighter who have too much power. Mate every time we start a new wipe on a private server we take a naked teimos/dalinsia/relic hunter with us because we cant afford a good heavy armor yet and crafting the bad ones is not worth it. They survive everything naked just with dragonbone swords and gruel. This is ridiculous and needs to be adjusted. Dennis said in the stream they’re going to be weakened but not useless. You can still take them to fight bosses or whatever you want to do with them. Im sure they wont hurt your precious fighter 1-3 and just adjust them accordingly. Its not the first time that health and damage of thralls gets adjusted. Last time all the thrall heros got heartattacks as well, guess what? Turns out funcom is not as incompetent as you might think.

It is never a good idea to balance a game around its weakest points. Never. So stop argumenting with lvl 1 fighter which arent able to do boss fights. If you balance the damn game around fighter 1 everyone will fall asleep while playing.

Yes. You are. No one will balance the game around a fighter 1 not even with a video which proofs nothing.

This one wonders what stats thralls will have in 3.0.
Will Grit be added to their list?
Will they have Expertise?

Will there be a substitute for Authority to represent how abjectly devoted they are?

On a personal level, this one would rather see the hidden damage modifiers all removed and set at 1.0, or just a number based on tier. Halving will bring Mdm Snowhunter down to 1.1, but some thralls will drop to a sub .5 wasp sting.
While HP bloat in some select thralls is definitely a thing, perhaps after they finish the nerf whack-a-thrall we can give bandits jobs or perhaps get the tall lady in the Nordheimer village to come home. Seriously, if it’s a living human (especially a bandit) we aught be able to show them the wheel. They can have typical tier 4 stats, but just having them as a trophy piece would be nice.

Okay. And you want to tell me you want to have balance around a lvl 20 fighter 1 yes? Is this what you’re trying to proof here or?

I needed to help her, but wasn’t really in any danger of losing her. And that was the puniest possible thrall in the game. So I’m sure we can afford to lose some power from our Lians and Beastmaster Teimoses without fear of losing them against a hyena.

Kapoteeni said it, it is not about the weakest thralls. Its about the strongest ones. Still.