This is just a fun discussion post. I’m interested to hear how people describe their play styles, like, how you prefer to play and why. I thought of making a poll, but it might be more interesting for people to just explain in their own words. Also let’s be honest, this is the internet. A poll would just result in arguments over how to define the poll choices!

I’ll go first. I’m a hardcore survival player, but for me immersion is probably the most important thing. I like to play solo on official PvP servers, as it means I’m surviving clanless and alone against the environment, with the added threat of other players, and on official servers people tend not to pull their punches

I don’t play Conan for it to be easy. I like the feeling of being knocked down and getting back up again.

I’m not at all interested in playing in a hardcore PvP clan, even though I often meet them and sometimes fight them guerilla style. I choose to play Conan over other similar games because I like the world. Playing in a clan means too many compromises that break my immersion, like building ugly stacked buildings and running around in godbreaker armour with a Teimos in tow. I like to play like I’m a wilderness-living nomad and I’m not going to change how I roll just to win a fight.

Likewise I avoid chat if I can. Text chat is OK but voice definitely breaks my immersion. I prefer to communicate with emotes or a sword lol. I raid people for loot and if someone attacks me I retaliate if I’m able.

It feels to me like most players I meet are either hardcore PvP people, or social gamers who enjoy clan life and eventually get smashed by the hardcores. Immersive survival purists like me seem a bit rarer. I wonder if that’s true?

Since Day 1. Still not bored.

Haha! Yes me too - still not bored, and I am much more successful at decoration than domination.

All i do is duel.

i use to have time to farm and build stuff and raid and wipe, and drama. but now i teach combat and duel.

A wanderer (never on horse). A lone warrior.
No big bases, just minor -lot of times temporary- homes.
I like to look around listening to the surroundings and music (mostly original, but a lot of times I listen to some GOOD ensiferum songs), I spend most of my times in taiga forests at night or on nordheim lands at daytimes with usually an animal follower, rarely a fighter. My home is not clustered with thralls.

I’m a hardcore survival player, but for me immersion is probably the most important thing.

I’m on PS5 PVE Official Server started on PVP when the game was first released and after a few months had my base completely destroyed by a God, I was a solo player and never went back to PVP.

I’d describe myself as a hardcore grinder. I enjoy levelling thralls and building small structures that make my area look like it’s a realistic version of some medieval King’s land and the lands he controls (still have my one larger walled off castle). I also enjoy decorating everything I’ve built quite extensively, from full set tables to stacks of boxes and barrels. I don’t leave the North very often, unless I’m going for some kind of resource run or dungeon.

Immersion is big for me as well, I want my area to feel like it is an actual place and time in a real world. When others build huge structures or structures I see as unrealistic (again just my own opinion) very close to me, I’m not super thrilled haha but most of these people tend to disappear pretty quickly!

I actually wish console had some kind of chat function that you could turn off if you so wished. There is absolutely no economy in the game unless you actually message and get to know someone else (which I have done), but it would be way easier if we could all communicate and possibly trade.

This new update has brought back some of the challenge for me, as the healing system makes things a bit more difficult and brings back some of that scariness of dying!

PvE-C
I play alone, i Rp for myself, i build a base or two.
I like to explore in PvP hours, i never kil anyone on sight but i defend myself from those who does it.
Once i finish all the PvE content i wanted to do and theres nothing else to build, i leave.

Some months later i go to another server and repeat.

Yeah, the “dominate” aspect seems to only be prevalent in PvP.

As for my playstyle, I’m mostly a PvE player (solo and/or family members). I like to explore, build, do the dungeons, collect recipes, and build more (not just bases, but villages with lots of thralls). And I’ve restarted my playthroughs more times than I can count. I’ve tried PvP, but never really got into it. Immersion is good until it makes the game ‘un-fun.’ So my immersion has limits. I am, however, hoping a fully-developed ‘rescue’ system for thralls gets into the game for better immersion (I don’t like being forced to be a slaver).

I like playing Robin Crusoe style, like building stuff. Some people like building HUGE structures, I like bridges and roads. For example once I built a road across the desert with torches and waystations with beds.

This is gonna sound stupid, but one of my most favorite things in game is watching the sunset and looking at how the light from the torches play on my structures. It’s such an amazing, beautiful game.

I like also build immersive bases over castles and big mansions. The survival aspect is very important to me, and i love my bases fitting the surrounding, and merge with it. I miss a bit the harsher weather, and overall survival trills from EA, but that’s life.

I stay mostly away from populated servers. Again, immersion, if there is a big block-castle at each corner, it’s no more exiled, and wild.
Often i use some mods, out of testlive, in the same spiiti, to make my world more immersive. Like small animal cages to tame some lonely wolves, or a panther i need.
I like have some good crafting thralls if i make an appropriate base, some chosen fighters, but not overdonem and not to many.

In the Exiled Lands you will mostly meet me in the north, on Siptah in the redwoods, or on the Island of Threa.

I am a pure PvE player and only play single player. Partly because I don’t have to “deal” with other players but also because I can use mods to my liking and in general do whatever I want.
Since I can change sliders in single player I often turn them up and down in a way to make the game a lot harder, putting things like NPC damage very high that I can be killed with just a few hits even in the strongest armor. I also experimented a bit with the other settings to make the game more fast paced (upping my own damage modifier and stamina modifiers etc.). Even though I change a lot of these settings I do not use the admin panel to add extra items, I try to do everything legit.

For the past few months though I haven’t really played, I only do pure “creative mode” sessions where I build stuff with admin commands and the admin panel. I try to recreate a few Greek temples currently and make them as historically accurate as possible, that is actually really hard to do with the games limitations (even with mods that remove most of them) but I think that makes it fun because I constantly discover cool new ways to design my buildings that way.

Little bit of everything. Depends on who I’m running with at the time as I can pretty much adapt to anything. I’ve PVP’d, PVE’d, RP’d, and every combination thereof. I’ve even Game Mastered a bit. Not merely just admining/moderating, but have created content in the form of dungeons and quests.

I no longer am an active player, but I do embrace the wild and rough way to live: I was a D1 PS4 user and I tried all kind of games and approaches I could imagine but in the end I like small huts of stone and wood (T2 or T3 max for the graphic style), stone or maybe iron weapons. Small places to live and just few thralls to put them in the workbenches (just to animate the environment a little).
Never played online 'cause I’m an antisocial (especially online tbh) son of Yog: bones, rituals, blood and scarred stone in the desert is my way of intending the gamestyle.
Building massive castles it’s no fun, a tower maybe, but nothing else, huts and bridges, small fires, nothing more.

Pure PVE, coop with my best mate on a private server. I would describe our playstyle in level of relevance for us:

1- PVE challenge - we want to be challenged by the PVE content, and feel achievement and satisfaction when we for example kill a boss. (our slider are atm at 0.3 dmg to npc and 1.5 for dmg of npc to us, altough its doesnt really take care of the issue, the fights are to simple)

2- Builder - Looter: We like to build and find/build new gear and see ourselves getting more pwoerfull.

3- Limited Roleplay- We dont roleplay by speaking or acting, but we do pay a lot of attnetion to deco, outfits, naming of places, some little altars for most dramatic battles etc.

Yes please more severe weather and longer darkness. Maybe some surprise attack pats on the base would be fun too.

Maybe some surprise attack pats on the base

Check out this mod. It sounds like the Pillager part is currently disabled, but it would add like mini purges. 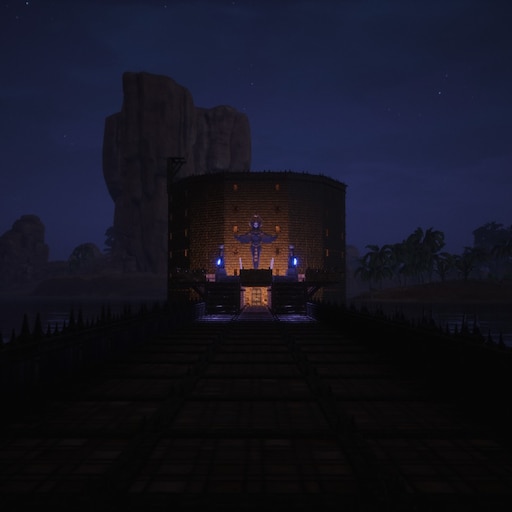 There is also an ambush mod. 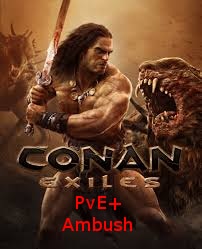 I kinda do this on Single-Player. I build a base near the Faction capitals and conduct raids against them. capture… I mean recruit their people and prepare my defenses against Purges. It’s not really domination per se, but at least I can pretend to be a source of concern to the local population.