Please use this thread to discuss Update 2.6 on Xbox.

[CE-2.6Final] [notes] [performance] Addressed an issue with the decay system that would compromise server stability when large buildings decayed. Fixed a number of client and server crashes. Curbed down on more instances of Log Spam. It’s still quite spammy, though. Fixed an issue that would cause gaps in the geometry due to asset streaming issues in older console models. [exploits] Fixed a number of exploits in regards to the building system, crafting, undermesh and player identity. Ha… 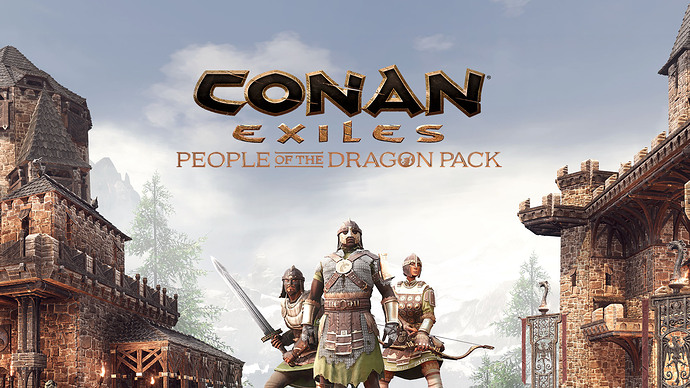 Greetings Exiles! We have just released the all-new People of the Dragon Pack. This DLC offers content from the kingdom of Nemedia and it lets you build stunning castles, decorate them with beautiful placeables and use new armors, saddles and...

patch on series x is 49,6 gb is ther any chance the game is getting smaller then the over 150 gb it is on series x?

All right, here is my take so far. Will edit as more game play.
Playing on a Xbox One X
Official PVE server

Cons.
The White background is still there.(See pic.)
During the day it’s just not white.

My Exile feels more like it’s floating while running. Movements seem very hyperactive. Seems to move much faster then the environment around my Exile. It’s like the game is on speed. Drinking a potion is super fast.

Thralls Still "Must be placed on a walkable floor

That’s weird, it was 150 gigs before the update for me, I haven’t had the chance to update.

I would really love if they could reduce the game size, I’ve seen it done with a few games.

I’m really looking forward to putting this patch through the wringer when o get the chance. There are a lot of bug fixes on things I found particularly annoying

Was sprint supposed to be changed?

For me i can come to a dead stop for quite a while and I’ll start sprinting again soon as i move, you have to turn off sprint yourself when you want to stop now

Was sprint supposed to be changed?

For me i can come to a dead stop for quite a while and I’ll start sprinting again soon as i move, you have to turn off sprint yourself when you want to stop now

The same I experienced yesterday on PC, were I play with controller. It was really annoying and needed 5 minutes until I got the culprit. The situation was really bad, because I sprinted to the enemy,started the fight and immediately ran out of energy… and again and again during the fight. Later I recognized I had to manually disable sprint pressing the left Joystick button… The behaviour before was much better (auto-disable sprint when you run out of energy) and more intuitive for me.

I actually didn’t notice this problem until I read this. And I can confirm that it is indeed happening. Seems at times when you release the controller stick, you continue to run on the spot for a second.
I wonder if this is the cause of what I am expierencing with seemingly faster game play.

Yeah the sprint thing is happening to me too.

I can confirm, sprint on Xbox is now basically a toggle, but only on foot. On horseback I still had the old click to sprint

What happens sometimes is, when you engage a fight your stamina drops without reason. toggling the sprint button does not help. as soon as you disengage, the old “new” behaviour is back. But this is not reliable reproducable.

I was able to use it pretty effectively once I figured out what the heck was going on. For awhile I just though my stamina was bugged.

I will say it’s nice to be able to attack and continue sprinting after without hitting a button again, so I actually kind of like that

But I find it to be much more cumbersome when traveling long distances, it’s very easy to space out and stop for a second and immediately start moving again expecting your stamina to start coming back, but instead you burn that last bit

So I guess I’m on the fence about it, but I just don’t see how it needed changed, even if I may like SOME aspects of it.

With this “on” you need a clever stamina management, because the regeneration is negative affected. So you can (too) easy run out of stamina during a fight. But for me it is ok, if it is intended it should be at least switchable in settings.

XBOX Patch 2.6.1 (03.11.2021) - Patchnotes Greetings Exiles, We have a small update that addresses some of the issues you’ve reported after the 2.6 patch. We are always working on improving Conan Exiles so please feel free to share your feedback with us. [image] [image] Dying while dismounting no longer causes performance issues. [image] Replacing any Inverted Wedge Sloped Roof with its Nemedian counterpart no longer results in destruction of both building pieces. DLC building pieces c…

Sweet was wondering why i was get the server restart countdown

Its been over a month, can we get some fixes for the bugs soon?