Only two of our scouts returned. They are in shock and keep sputtering the same warnings over and over:

“They cannot be killed”
“Beware of the totems”
“That cursed mist”

I think these are just the development team’s reactions to the threads in this forum?

They reek with the putrid scent of dead men.

Yeah, that confirms it… They’re talking about us for sure!

They are planning to offset the dismal game sales with new merch!

We still have not heard from our eastern pathfinder,
who has now been missing for several moons.

The person assigned to work on east area of the new map update is either out sick or is participating in the walkouts that seem to be all over the news?

I fear these are grave matters.

The update is taking longer than expected and will be late?

We must mobilize our forces immediately.

Either they’re throwing in the towel on CE and heading for Mexico, or they’re moving to new offices? 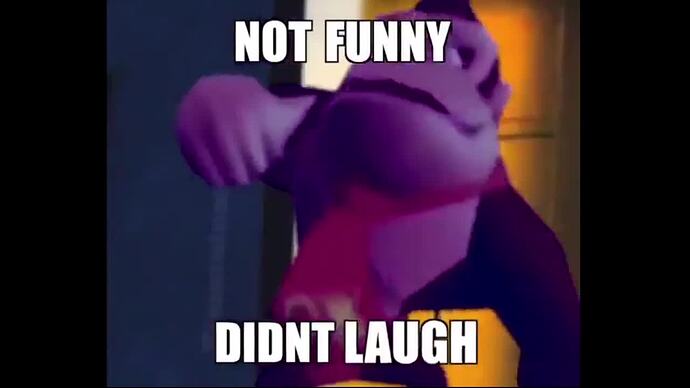 In regards to that last image - I’m pretty sure it’s actually Priest-King’s Retreat. I don’t have any screenshots to back it up at the moment but I’m pretty sure the vantage point for the picture is a spot where I always used to build a base back before the area got loaded up with spitting iguanas (it’s just past the northern entrance to weaver’s den).

I’ll try and get a screenshot of the area soon to post.

I’m pretty sure it’s actually Priest-King’s Retreat. I don’t have any screenshots to back it up at the moment but I’m pretty sure the vantage point for the picture is a spot where I always used to build a base back before the area got loaded up with spitting iguanas (it’s just past the northern entrance to weaver’s den).

I scoured the area for any faces that could possibly match. This was the closest, but no dice. If I did miss something lemme know, but from what I flew around in admin mode I couldn’t find anything that matched this 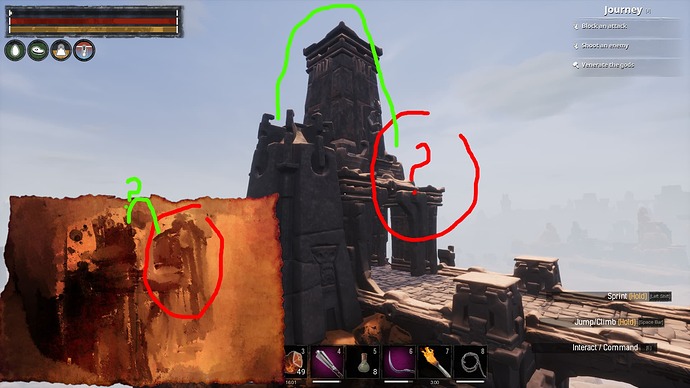 I revisted my two theory places, and I was able to prove without a shadow of a doubt this is the Summoning Place in the clue. One more piece of the puzzle falls into place. But the lingering question still remains; what does it all mean? The clues are telling us something is important; but is it the locations, or are the locations just clues in their own right? The Summoning Place is the only place to get Witch Doctor, which is described as not true necromancy. The Mounds also has undead present near that clue, in the form of wights. There’s definitely an undead connection here, but why Flotsam? That one is the odd one out to me

There’s definitely an undead connection here, but why Flotsam? 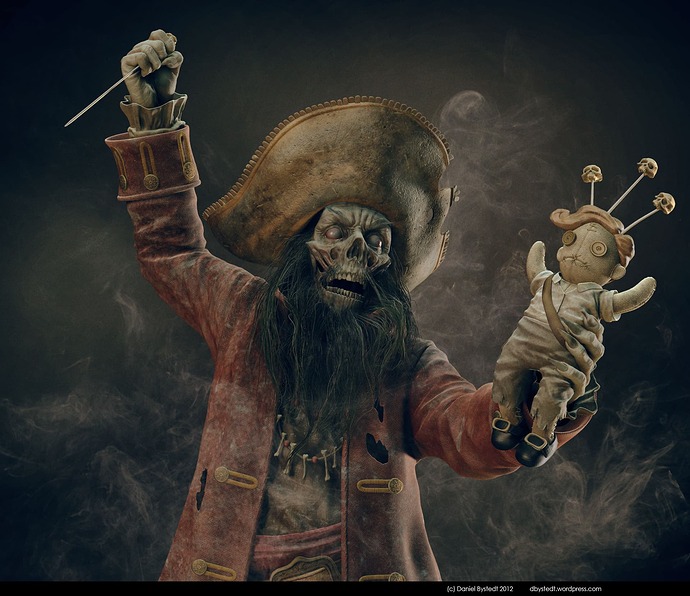 The spot I was thinking of was down on the ground but I was wrong. I had forgotten that the southern aqueduct is broken at that point over the pool where that crocodile boss is. Like I said, I haven’t been there since they populated the area with iguanas.

Exactly! And the “hazy cliffs” in the back too. I used to have a PvP player trap base in the pool at PK, long before the Boss Croc went in. Something indeed looks familiar.

Buildable “Totems” that exude purple smoke corruption (AKA small Obs ) that raise the dead in the corruption zones. The more things that die there, the more dead stand there waiting to increase their numbers. New necromatic armor type…(perhaps a means to reduce the corruption influence) and who doesn’t like the thought of ghost pirates…this is sounding more and more like a necromancy addition. I would really like the placeable corruption zones…the defense building options…::shivers::

Overanalysis coming up soon. @KiahonfireOfficial also found some incredible new items in the testlive that link to all this. I’ll be compiling it all together and trying to find out what it means.

First glance, these are definitely the totems described. Same symbol on it, same mist. There’s something else in the background. Maybe a summoning circle? The totems could surround it and empower it

The spot I always chose was in the flat of the river bend next to the waterfall. At the time it was just too good of a spot to pass up - nothing around to attack save for a stray spider now and then out of weaver’s den and it was out of the path of the sandstorm. As I was flying up to the area to double check I went past The Summoning Place and looking back at it from northwest corner I have to agree with Jimbo’s assessment that that image is indeed the place.

We may have a new exiled landscape. It’s raining so definitely EL and the sand means a beach area.

@Aurelio found this. It looks spot on: 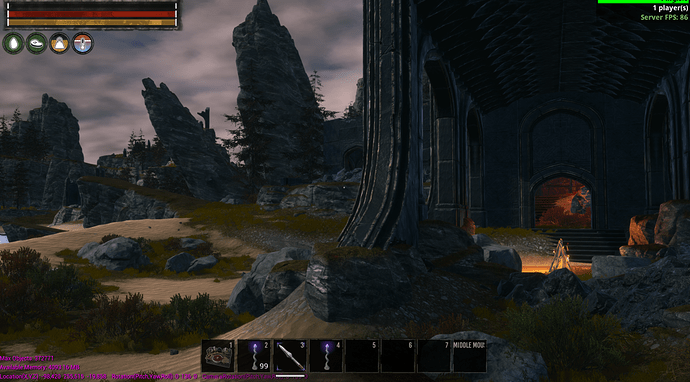 P.S Isle of Siptah (with rain

The totems seem to surround that magic shield thing in the middle: 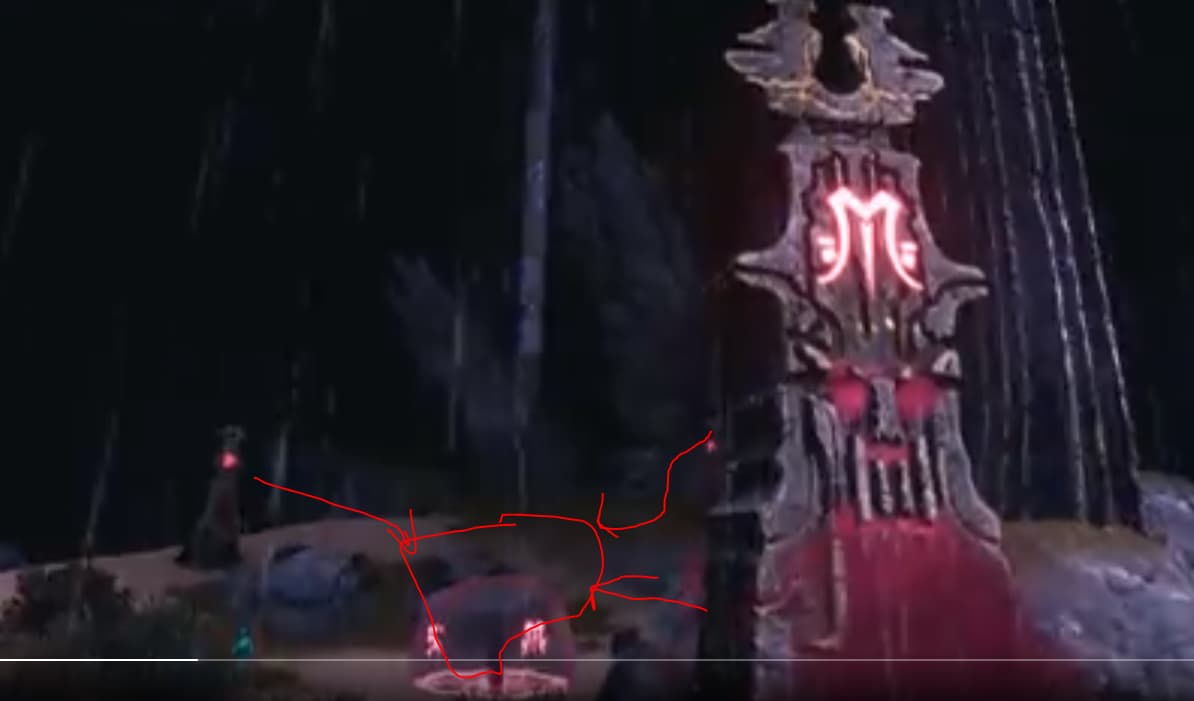 But all the previous clues were linked to EL so it must be something affecting both maps. Necromancer summoning skeletons as followers? Official travel system between the maps?

The symbols are visible on the shield as well. Maybe each totem has a different one as well? 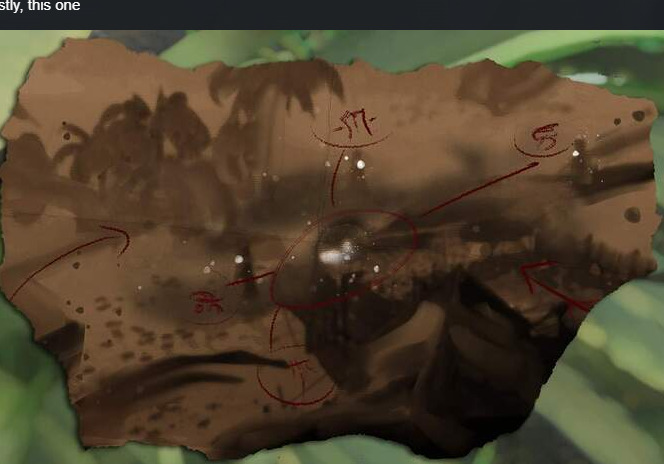 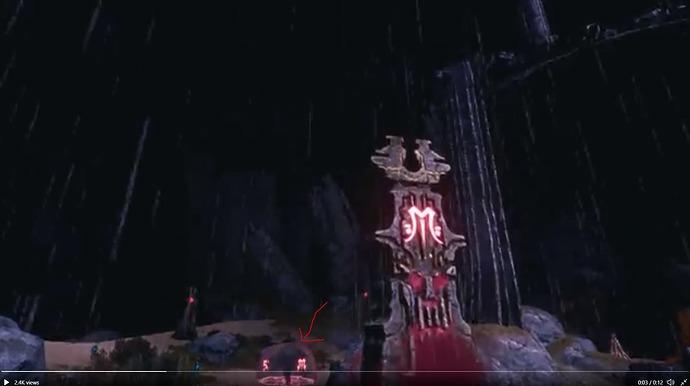 The symbols are visible on the shield as well. Maybe each totem has a different one as well?

Whatever the symbols are, they seem to be directly linked. Enchanted runes, eldritch language, uncertain. But what is certain is they’ve been showing up a lot. The first note, the third clue, and now on these. Given several symbols are present at once, I’m assuming each corresponds to an element of the ritual needed, regardless of ritual site. What the ritual is, I do not know

This is neat to follow, but man, as someone who can’t even be bothered to go through the hassle of getting thralls half the time…all I can think is “I am definitely too lazy to ever actually use whatever this is going to be.”

I wonder if these help with any of this stuff in any way? 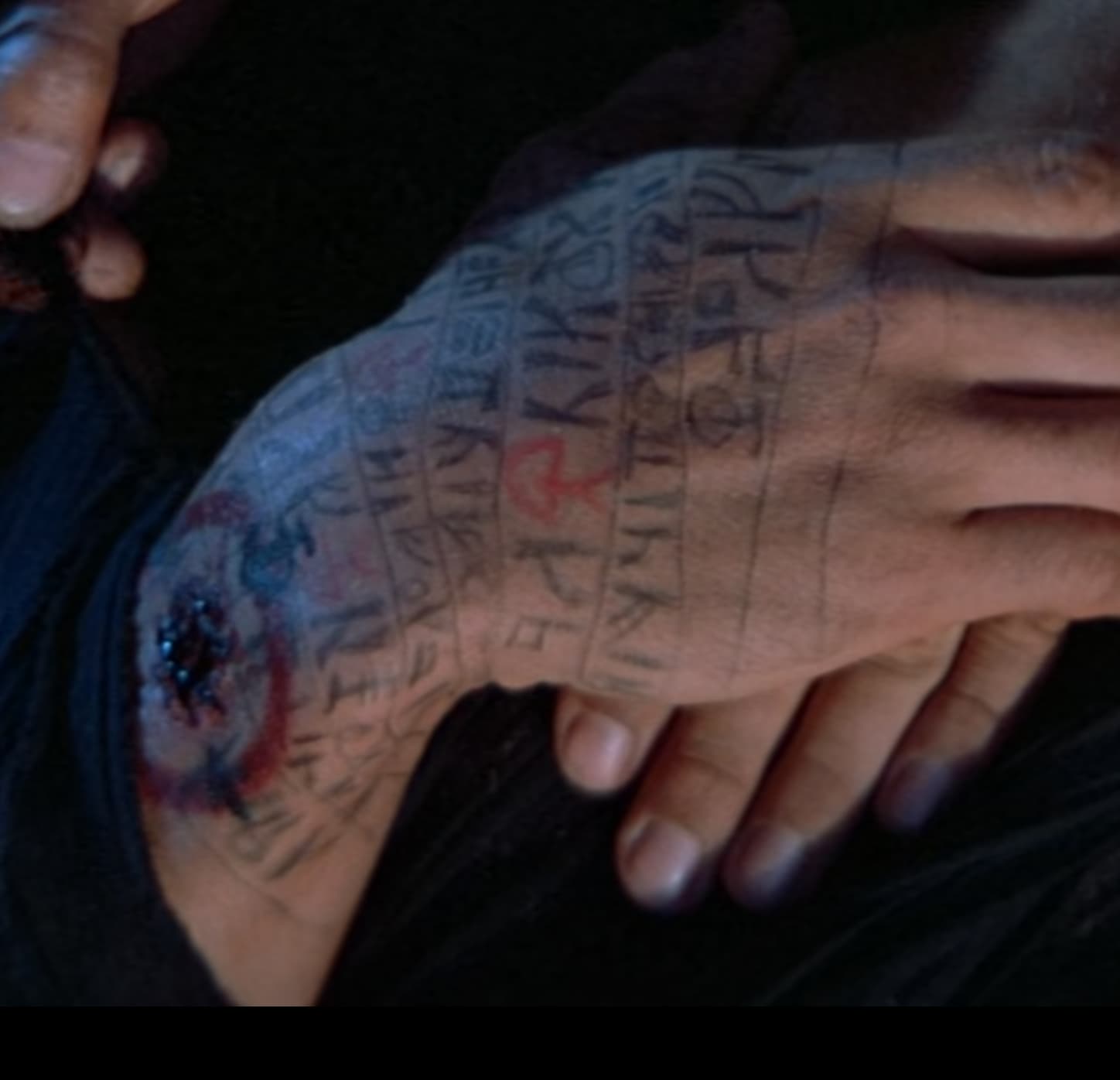 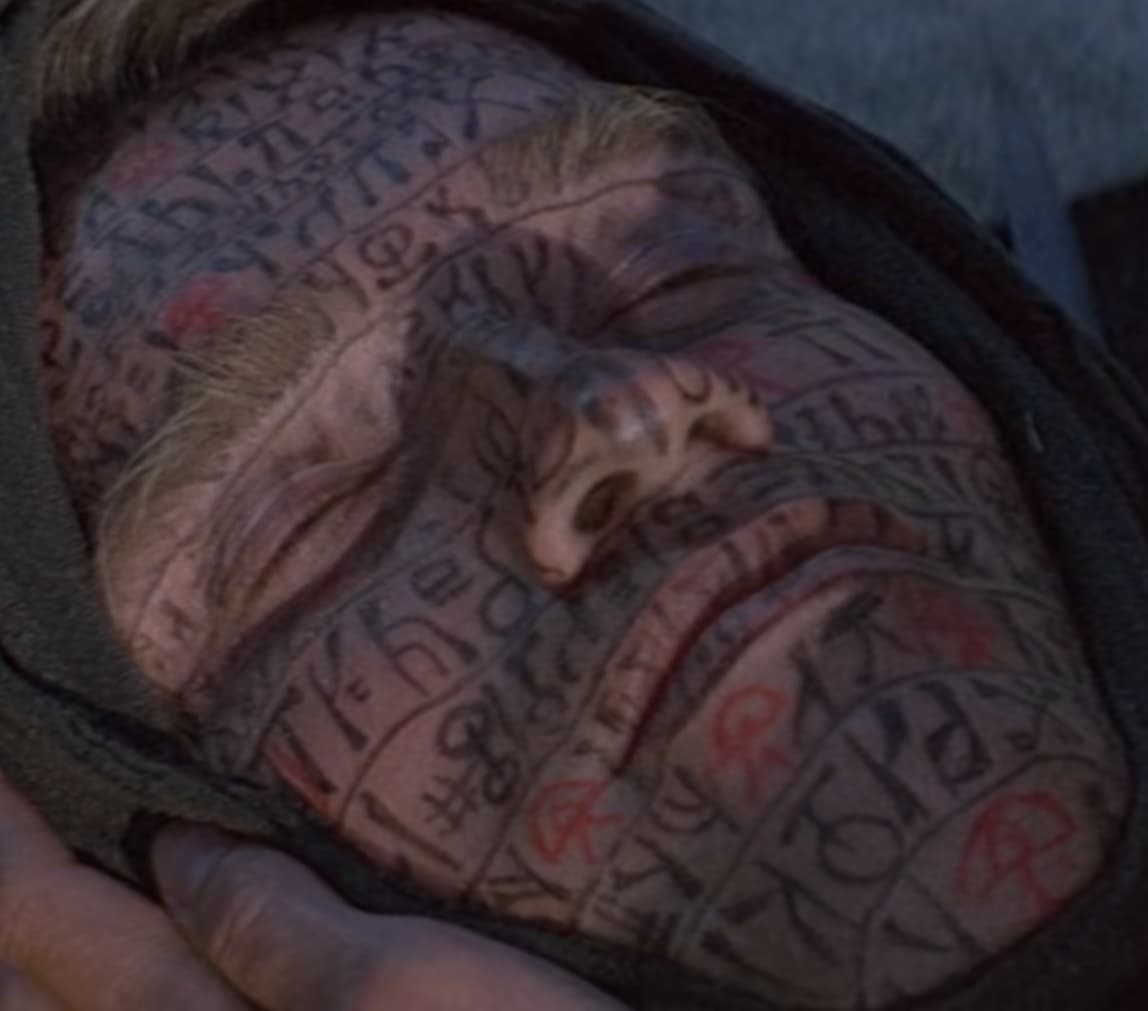 What is this from? I have no idea what this is

Those were drawn on Arnie’s face and hand by the story-teller-sorcerer in order to ward off the gods from taking his life when he was mortally wounded and near death. Some of the characters here are the same as in the scraps of paper and so on…

This game uses soooo many references from that movie it’s unreal! They used it for armor styles, weapons, thrall wheel, symbols, buildings, the city in the E.L. map, even a few actor’s faces.

Those were drawn on Arnie’s face and hand by the story-teller-sorcerer in order to ward off the gods from taking his life when he was mortally wounded and near death.

Which movie? It’s been a couple years since I’ve watched them and my mind completely blanked and I do not remember this happening.

Could you highlight them? I see similar, but not same.